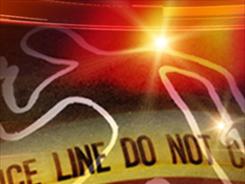 A Flagstaff-based agent with the Bureau of Alcohol, Tobacco, Firearms and Explosives shot and killed his wife, then turned a gun on himself Monday evening.

Agent Daniel Raponi, 37, and his wife Jessie, 34, were found dead in their home on the 3800 block of Box Canyon Trail just before midnight, said Lt. Ken Koch of the Flagstaff Police Department.

"We discovered Agent Raponi and his wife both deceased from gunshot wounds," Koch said, adding that evidence at the scene suggested Raponi shot his wife, then himself.

There were no indications of a struggle or of any signs of forced entry into the home, Koch said.

Police were notified of the shooting when Raponi's children ran to a neighboring home where a Flagstaff police sergeant lived stating that they heard shots fired in their home.

Koch said that police are working on why Raponi shot his wife and then took his own life. The investigation is a joint effort between the police department and ATF.