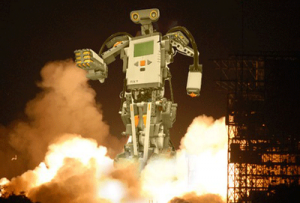 If space is to become a new potential zone of conflict, its unique nature demands that unmanned systems play a key, and perhaps near-exclusive, role. Not only do weapons in space need to stay up there a long time, but the major challenge of fighting in space is first getting things into space. It costs roughly $9,100 a pound to launch anything into space with the Space Shuttle. So, if a system is to be manned, the human and each and every pound of water, food, and oxygen tanks to keep them alive is expensive to send. Likewise, manned systems in space are incredibly vulnerable (one bullet or laser hole and there goes all the air).

Instead, the U.S has already started work on a number of unmanned systems for potential use in space. One example is the X-37, an orbital test vehicle about a quarter of the size of the Space Shuttle, which flew its first test flight in 2006. The military’s strong interest in it is perhaps best illustrated by the fact that, while the program was originally run by NASA, its development was then transferred over to DARPA.

Another program is the X-41 Common Aero Vehicle, also known as the Falcon program. Planned for testing in 2010, it is a cross between an intercontinental ballistic missile and the Space Shuttle. It is designed to travel at the border between space and the atmosphere, around 100,000 feet, but, unlike a missile, the Falcon will be able to come back after a mission if it finds no targets. As John Pike of the Global Security organization comments, the aim is to give the U.S. the ability to “to crush someone anywhere in the world on 30 minutes notice, with no need for a nearby airbase.”

This weaponization of space, unmanned or not, is certainly controversial. Former U.S. Senate majority leader, Tom Daschle, described the plans to investigate the possibility of war in space, then being pushed by Sec. of Defense Donald Rumsfeld, as "the single dumbest thing I have heard so far from this administration…It would be a disaster for us to put weapons in space of any kind under any circumstances. It only invites other countries to do the same thing." Lt. Col. Bruce Deblois of the U.S. Air Force published a detailed study that concurred with Daschle. The report argued that while being the first to deploy weapons into space might seem advantageous, it would only open up the floodgates for others to the same.

These fears do appear to be playing out. In 2007, after a test of their own anti-satellite missile, senior colonel Dr. Yao Yunzhu of the Chinese Army’s Academy of Military Science, issued a not thinly veiled warning. If the U.S. thought it was going to be “a space superpower, it is not going to be alone…It will have company.” This debate will likely rage on for years, if not decades, or at least until the Vulcans arrive to resolve it for us.

But what is interesting is that governments are not the only ones looking at space as a new unmanned battleground. In 2007, the Tamil Tiger group of Sri Lanka became the first, but likely not last, terrorist group to takes its operations into space, hijacking the signal from an Intelsat satellite and using the commercial satellite to beams its own messages back to Earth. And, just as private companies like Blackwater have reentered the conflict game on this planet, we should not be surprised if privatized conflict also rises one day in space, especially with the growth of private space businesses. Examples include Richard Branson’s “Virgin Galactic” space-line plan or Google’s $30 million prize to the first private team able to land a robot on the moon (one of the competitors is actually also the team behind some of the Pentagon’s energy beam weapons programs). Robo-One, a robot competition event held in Japan every year, may provide a taste of what’s to come. The organizers have announced plans for a new division in 2010: robot combat in space. A small satellite, carrying humanoid robots will be blasted into the heavens. “Once safely in orbit, the satellite will release its robotic passengers, who will proceed to fight each other in the vacuum of space.” Space, the final frontier, for humankind, and robot war.