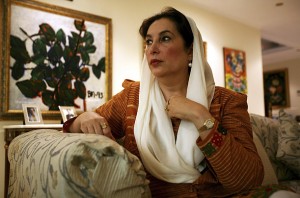 Controversy has swirled continually around events leading up to her death Dec. 27, 2007. She was killed in a gun and suicide bomb attack in Rawalpindi immediately after a rally she held as part of her attempt to win election as prime minister for a third time.

“The court has issued warrants and these are non-bailable,” special prosecutor Chaudhry Zulfiqar Ali said. “They can be arrested anytime. I argued that they were responsible for Bhutto’s security and they failed to make fool-proof security arrangements and they ordered the crime scene to be hosed down despite resistance from other officials.”

Wanted by police are Saud Aziz, former police chief of the city of Rawalpindi, and one of his deputies, Khurram Shahzad.

Many Bhutto supporters said they suspected government involvement in her death, not least because Bhutto, who returned from self-imposed exile in London, said she feared she would be a target for an assassination attempt by elements of Pakistan’s security authorities.

Immediately after her death, the government launched an inquiry that concluded she died from an injury caused when she hit her head on the edge of the opening in the roof of a vehicle in which she was traveling. However, her supporters suspected the inquiry was a whitewash and pressed for an independent inquiry. Also, they claimed that video footage from a cellphone showed her being shot by a gunman.

The government blamed the assassination on the head of the Taliban in Pakistan, Baitullah Mehsud, although he denied involvement. Nonetheless, five people suspected of connections to extremist groups are facing trail over Bhutto’s death. The latest arrest warrants come after continued pressure by Bhutto’s supporters in the wake of last April’s U.N. report into the incident that pointedly said the government and police had failed in their duty to protect Bhutto.

“A range of government officials failed profoundly in their efforts, first to protect Ms. Bhutto and second to investigate with vigor all those responsible for her murder, not only in the execution of the attack but also in its conception, planning and financing,” the head of the three-person commission, Heraldo Munoz, said upon publication of the report.

Munoz also said the government should set up a “credible, serious” investigation into Bhutto’s death.

The U.N. report said there was much evidence that suggested Pakistan’s politicized intelligence agencies had hampered the initial official inquiry.

“The commission believes that the failure of the police to investigate effectively Ms. Bhutto’s assassination was deliberate,” the report said. “These officials, in part fearing intelligence agencies’ involvement, were unsure of how vigorously they ought to pursue actions, which they knew, as professionals, they should have taken.”

She also was dismissed both times from office by the president over allegations of corruption, including the political and business affairs of her husband, Asif Ali Zardari, that dogged her until the last.

While in self-imposed exile in London, she set up an office of the Pakistan People’s Party, the center-left party created by her father. She returned to Pakistan in 1988 upon Zia’s death in a suspicious airplane crash and won a general election for the first time.

Three days after Benazir Bhutto’s assassination in 2007, her son, Bilawal Bhutto, became chairman of the PPP. In September 2008, Zardari was sworn in as Pakistan’s president after winning an election.

Who is Paying Right-Wing Trolls to Dumb Down Online Conversations?
Dec 17