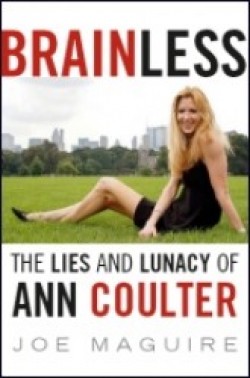 The Weekly Rant: Now She Wants to be a Nazi

Re Ann Coulter: " ... Aside from supporting the annihilation of anyone who isn't a neo-conservative Christian, she has finally taken that last step into unabashed white supremacy and condemned followers of Judaism.

In an interview with Donny Deutsch on CNBC, Coulter said, "We just want the Jews to be perfected…that's what a Christian is."

Hmm, this idea of "perfecting" people sounds an awful lot like a popular ethos in certain European countries back in the '30s and '40s-especially that part about singling out the Jews.

When Deutsch-a practicing Jew-became understandably frustrated, he said, "You said, your exact words were, 'Jews need to be perfected.'"

Coulter responded: "No, I'm saying that's what a Christian is."

The idea that people can be "more perfect" than others also reeks of Nazism. And it's amazing-and simply despicable-that people still believe in the purification of the human race sixty years after Hitler's twisted dream was brought to its knees. The United States played an integral role in bringing down National Socialism. What does Coulter have to gain by stoking the flames of this passé ideology?

Were Coulter's human-cleansing provocation representative of only a small minority of nuts attempting to expand their perverted neo-nazism, this wouldn't be such a big deal. We could shake our heads and dismiss that. But this naiveté doesn't account for the fact that Coulter-and Rush Limbaugh, Bill O'Reilly, and their ilk-are best-selling authors and media pundits. Millions of Americans accept their message as gospel.

It's particularly disheartening to see the Coulter community of neo-con agitators amass fame and fortune with their agendas of prejudice. These bigots came onto the political scene assuring rich white people it was okay to cherish their prejudices. ...