A notorious Hungarian racist who has called Jews “stinking excrement”, referred to Roma as “animals” and used racial epithets to describe Black people, was a featured speaker at a major gathering of US Republicans in Budapest.

The last featured speaker of the conference was Jack Posobiec, a far-right US blogger who has used antisemitic symbols and promoted the fabricated “Pizzagate” conspiracy theory smearing prominent Democrats as pedophiles.

Bayer, a television talkshow host in Hungary, has been widely denounced for his racism. During the 2020 Black Lives Matter protests, he wrote on his blog: “Is this the future? Kissing the dirty boots of fucking [racist epithet] and smiling at them? Being happy about this? Because otherwise they’ll kill you or beat you up?”

In 2011, he used the phrase “stinking excrement” to refer generically to Jews in England, and in 2013 wrote: “a significant part of the Roma are unfit for coexistence. They are not fit to live among people. These Roma are animals and they behave like animals.”

When he was awarded the Hungarian order of merit in 2016 by the country’s nationalist prime minister, Viktor Orbán, the star speaker on the first day of CPAC Hungary on Thursday, the US Holocaust Memorial Museum protested, saying it “reflects the longstanding refusal of the leadership of Hungary’s ruling Fidesz party to distance itself from Bayer, in spite of Bayer’s repeated pattern of racist, xenophobic, antisemitic, and anti-Roma incitement”.

At the CPAC event on Friday, he appeared on stage with a prominent rightwing Hungarian screenwriter talking about gender issues. Bayer focused on deriding Calvin Klein for political correctness, comparing a 2009 ad featuring a white supermodel, whom Bayer called “a very hot woman”, with a 2019 ad featuring the Black rapper Chika who he described as “not so hot”, adding: “it’s clear that this ad was born under the aegis of Black Lives Matter”.

Addressing the conference by video shortly before Bayer’s appearance, Trump poured compliments on Orbán, who was recently elected for a fourth term as prime minister.

“He is a great leader, a great gentleman, and he just had a very big election result. I was very honored to endorse him,” Trump said.

The US thinktank Freedom House has downgraded its assessment of Hungary to being a “partly free” society under Orbán and the Fidesz party, noting “constitutional and legal changes that have allowed it to consolidate control over the country’s independent institutions, including the judiciary”.

It also criticised the government for anti-immigrant, anti-LGBT+ policies and curbs on the independent media universities and NGOs. 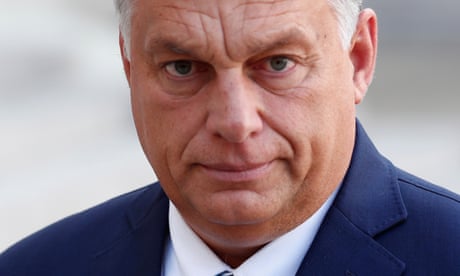 Orbán, like many American Republicans, has embraced the “great replacement” conspiracy theory, which involves promoting the belief that the white population is being deliberately reduced by leftist policies and diluted by immigration.

CPAC, which is organised by the American Conservative Union, did not respond to a request for comment on Bayer’s participation. Matt Schlapp, the CPAC chairman, complained on its website that: “Leftist media launched a coordinated smear campaign” on the event.

“Our mission is to increase freedom and opportunity across the globe, including for those living under socialist and Communist regimes,” Schlapp said.

“To hear the condescending whines from socialist boosters in the media like the Guardian, however, you would be led to believe that CPAC stood for something very different,” he added. “In the woke, warped logic of government-financed NPR [National Public Radio], somehow calls for liberty and national sovereignty are akin to racism and authoritarianism.”