It's a scaled-down version of another Nazi industrial front, the German-Marshall Fund. Both were organized to put a happy face on German fascism. - AC 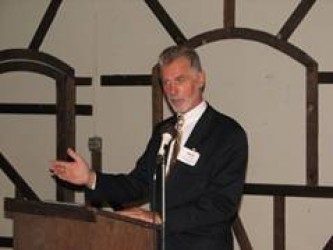 If you were looking for a symbol of friendship between Germany and Mobile, the "old-fashioned apple pecan strudel" might have been a good place to start at a recent meeting of the American-German Business Club. ...

In its third meeting since its founding last year, the club was hailed by visiting German diplomat Lutz Goergens. The German consul general based in Atlanta, Goergens assists German citizens and promotes his country's business and political interests in six states, including Alabama.

"If German business does well, it amazingly boosts Germany's standing in the American community," Goergens told the gathering. "The club would not exist, I would not stand here, if there was not such success by ThyssenKrupp, Evonik (Degussa) and many other fine companies."

[ThyssenKrupp: This "fine" company was an ally of Prescott Bush at Brown Brothers Harriman and other domestic fascist investors, and was key to Nazi aggression in the '40s: " ... Fritz Thyssen, the elder son of August, is remembered more for his association with Adolf Hitler than for his business skills. Frustrated by his father's long tenure at the head of the company, Fritz channeled his energies into right-wing politics aiming to subvert the Weimar Republic. He became an early supporter of the Nazi party. Fritz later fell out with the Nazis and recanted in a ghostwritten autobiography titled I Paid Hitler. He fled Germany in 1939, was captured in Vichy, France, and incarcerated from 1941 to November 1943 in a mental asylum and then until the end of the war in concentration camps. After World War II, Fritz's break with the Nazis was largely accepted by a denazification court, which fined him 15 percent of his German properties. At the end of 1948 he immigrated to Latin America. ... "]
http://www.answers.com/topic/thyssenkrupp-ag

[Krupp and the Nazis: " ... use[d] 100,000 slave laborers to make weapons at Auschwitz and other death camps. Boss Alfried Krupp was sentenced to 12 years for war crimes but was freed in 1951--cynics say because the Korean War had just broken out and the U.S. needed Krupp's industrial might as a bulwark against the Reds. Its assets restored, Krupp again became a corporate giant and remains so today. ... ]
http://www.straightdope.com/columns/read/1095/did-krups-braun-and-mercedes-benz-make-nazi-concentration-camp-ovens

The Mobile chapter was founded in the wake of ThyssenKrupp AG's announcement that it would build a $4.65 billion steel mill in Calvert. The club is open to anyone who wants to build ties between the two countries.

Klaus Jeschke [an advisor to Mobile's Chamber of Commerce, and an executive at Expense Reduction Analysts, consultants in business cost-cutting] and others organized the club in August. It has now surpassed 75 members.

The Association of German Business Clubs has 10 chapters in Germany, plus one in the Washington, D.C., area. Jeschke has been a member of the Dusseldorf chapter. The group was founded by American executives in 1964 in Frankfurt, and has grown to more than 700 members. ...

"We want to make sure that the German families are out making friends with Americans," he said. "I think we should learn something of the American culture and American food. The Americans should learn Germany is more than ThyssenKrupp."

The Mobile Area Chamber of Commerce [an enclave of industrial fascists] is aiding the club, in part because it could be an amenity in recruiting other German companies to the area. The area's most prominent German-owned companies include ThyssenKrupp, Evonik Degussa, and Berg Steel Pipe Corp. [or Bergrohr, a manufacturer of oil well pipes, founded in 1979, does business with Iran] German executives from all three of those firms are involved.

The American members include economic developers, people who would like to do business with relocating Germans, and Mobilians with ties to Germany.

A similar organization, the Alabama Germany Partnership, is based in Birmingham. It was founded after the opening of the Mercedes Benz assembly plant in Tuscaloosa

[Straight dope: " ... Daimler-Benz ... avidly supported Nazism and in return received arms contracts and tax breaks that enabled it to become one of the world's leading industrial concerns. (Between 1932 and 1940 production grew by 830 percent.) During the war the company used thousands of slaves and forced laborers including Jews, foreigners, and POWs. According to historian Bernard Bellon (Mercedes in Peace and War, 1990), at least eight Jews were murdered by DB managers or SS men at a plant in occupied Poland. There was a report that Daimler-Benz built mobile poison gas vans, but this has never been corroborated and is doubtful.

"Many big German companies used slaves during World War II. The most important was I.G. Farben, the German chemical monopoly. IGF had a substantial interest in one of the companies making Zyklon B, the poison used to gas the Jews. (The director of that company got five years; the heads of the other one were hanged.) The Allies ordered IGF broken up after the war but the pieces are still around, including such well known companies as Bayer and BASF. ... ]
http://www.straightdope.com/columns/read/1095/did-krups-braun-and-mercedes-benz-make-nazi-concentration-camp-ovens
•••
The state's list of German-based industries in Alabama, with what they produce and their estimated employment: