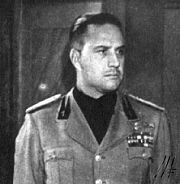 Sleazy, greasy and seedy, Count Gian Galeazzo Ciano was Italian Consul in Shanghai from 1931-32 and boasted a family connection to the man he represented – he was Mussolini’s son-in-law.

He was also one of the most colorful personalities in Shanghai’s stuffy diplomatic circles and a fixture in the city’s swanky nightclubs, where he courted countless Chinese beauties. “He was a bounder,” recalled Lord Vansittart, head of the British diplomatic service, “but bounding is no sin in the sun.”

A 1936 Time article described Ciano as a “fascist zealot before he was out of his teens,” but you could even say he was born into fascism. His father, Count Costanzo Ciano, was one of Italy’s most conspicuous naval heroes of the Great War and the first Italian of national prominence to join Mussolini, then a struggling newspaper editor, to form the National Fascist Party. Son Ciano went to law school at the University of Rome, after which he became a theater and book reviewer for Nuovo Paese, the first fascist newspaper in the capital. Around this time he fought a duel with a communist whom he gravely wounded, though not his pride evidently; Ciano later signed him up as a fascist. Ciano then entered the diplomatic service where he took up postings in Rio de Janeiro and Buenos Aires and soon earned a reputation as an international playboy.

He was then sent to Beijing where he served under Daniele Vare, Italy’s Minister to China and the man who coined his profession’s greatest maxim: “Diplomacy is the art of letting someone have your way.” Italy’s interests in China at the time amounted to an area of about half a square kilometer in Tianjin and two commercial quarters in Beijing and Shanghai – rights of occupation won under a 1901 peace treaty between the Empress Dowager and the colonial powers. The Fascist Party dominated Italian political and social life in these territories through groups known as Fascio. The emperor may have been far away, but the Fascio made sure tribute was paid. All Italian organizations in China were chaired by local fascist leaders and at Italian National Day receptions and important social events, fascist leaders were second only to the Consul General in receiving guests.

Ciano’s stint in Shanghai was to follow later. In the meantime he was recalled to Rome to become first secretary of the Italian Embassy to the Vatican. It was here that he met Mussolini’s favorite daughter, Edda, herself a livewire who once, in the guise of a mermaid, swam three kilometers out to a warship to greet her father. Her courtship with Ciano was passionate and brief; they married within weeks in a lavish ceremony attended by 4,000 guests (viewable here, just search for ‘Signorina Edda Mussolini’). Soon after, the newlyweds sailed for Shanghai where Ciano took up the post of Italian Consul General.

It was, by all accounts, an open marriage; both had lovers. Ciano, however, seemed the more prodigious of the two, pursuing Chinese beauties in nightclubs “to such an extent,” an eyewitness recounted to Harriet Sergeant for her 1991 book Shanghai, “that Edda had the greatest difficulty catching her husband’s attention long enough to get pregnant.” She did, however, conceive, and their son, Fabrizio, was born in Shanghai in October 1931. On account of his birthplace he was known in the family as the ‘Little Chink,’ a nickname as derisory then as it is now.

Italy and China moved closer under Ciano; he convinced Nationalist leader Chiang Kai-shek to buy Italian military airplanes, an arrangement which lasted until ties between the two nations were severed in 1937. The Generalissimo also chose Ciano for the all-important role as go-between with Japan, which had already invaded Northeast China – the first salvo in the empire’s brewing war with China. But Ciano did not limit his interest exclusively to Chinese affairs. Sir Miles Wedderburn Lampson, Britain’s Minister in China, recalled his attendance at a low-key conference: “As usual, he had had a telegram from Mussolini authorizing him to take part in any conference about anything whatever happening anywhere – which is very much the usual attitude of Italy.”

Ciano returned to Rome in 1932, but continued to be involved in China policy. Back at home, he rose rapidly through the ranks of the fascist hierarchy. Edda’s ambitions for her husband were an unabashed open secret. She believed that Ciano would take over as the new leader of Italy once her father had laid down the cares of dictatorship. Although the vainglorious Mussolini probably believed there could be no successor to him, he nonetheless favored Ciano. Perhaps he saw in him something of himself – a vain, egotistical, ambitious careerist and womanizer. Ciano also did his utmost to ingratiate himself with Mussolini – when Il Duce went on a fruit diet, so did Ciano. His sycophancy paid off – in 1936, at age 33, Il Duce appointed him Italy’s foreign minister, the youngest of any of the great powers.

The following year, 1937, proved to be a pivotal one. On November 6, the relationship between Italy and China suddenly changed when Italy joined the Anti-Comintern Pact, which Nazi Germany and the Empire of Japan had entered into a year earlier. By signing the agreement, Italy formed the third part of the triumvirate of what became known as the Axis powers, against whom the Allies would later wage World War II. “One could sense an atmosphere very different from the usual diplomatic ceremonies,” Ciano recorded in his diary. “Three nations engaged down the same path, which could lead to a war.”

Chiang Kai-shek immediately broke off official relations with Rome and the new situation caused the immediate isolation of the Italian settlements in Tianjin, Shanghai and Beijing. Ciano impounded all further shipments of arms to the Chinese. “One cannot run with the hare and hunt with the hounds,” he wrote in his diary entry of December 26.

Despite the formal breaking off of relations, Ciano continued to meet with Chiang Kung-pao, the Generalissimo’s envoy to Rome, whom he frequently urged to allow him to mediate with the Japanese. The advice was relayed to Chiang Kai-shek but never acted upon. Ciano’s war diaries (see box, right) reveal that the Chinese were betting on two things in their war of resistance against Japan – the vastness of their land and a long war, both of which they thought would eventually exhaust Japan’s will to conquer China.

When the fortunes of the Axis powers began to turn sour, Ciano began conspiring with other disaffected fascists about suing for peace. As early as 1939, he had reached out to Britain, seeking to broker an agreement that would stymie Hitler and elevate Italian prestige. In mid-1943, with the Allies attacking Sicily, he began to look for ways to take Italy out of the war. Il Duce, however, clung to his belief that the Axis powers would triumph. By this time, he and Ciano were barely speaking. At the importuning of Hitler and his wife Rachele, who had come to despise her son-in-law, Il Duce reshuffled his cabinet, dropping Ciano and downgrading him to ambassador to the Vatican.

He did not, however, remove him from the Fascist Grand Council, the small group that dominated the party and was ostensibly the supreme power in the regime. In July 1943, as a member of that council, he voted against his father-in-law in a coup d’etat. For this, he was arrested, tried and sentenced to death by firing squad.

Edda implored her father to commute the execution, promising to yield Ciano’s diaries, which both knew contained explosive secrets. Mussolini, however, was unmoved and Ciano faced a 25-man firing squad on the morning of January 11, 1944, in Verona in Northern Italy. He had asked to be executed facing the firing squad, but that request had been refused; traitors, it was ruled, should be shot in the back. His dying words are said to have been “Long Live Italy!” With that patriotic outburst the life of Count Gian Galeazzo Ciano, Mussolini’s one-time heir apparent and man in China, had come to an end.