Afghanistan: No Longer a Debate About Targeted Killings 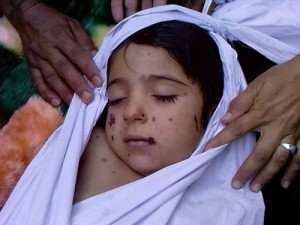 There was a lot of uproar last week about a secret CIA assassination plan that was apparently never implemented, but remarkably little discussion of CIA operations that have killed hundreds of people in Pakistan in the last year alone.

These killings, in which the United States targets drone strikes at specific individuals, are deeply controversial: innocent civilians have allegedly died and the legality of the killings is unclear. Just as Abu Ghraib became the face of U.S. interrogation policy in Iraq, so the specter of hundreds of dead civilians threatens U.S. counter-terrorism efforts in Pakistan.

Yet there has been no real domestic public debate or meaningful congressional oversight over targeted killings, even though their strategic and policy consequences are hotly contested. CIA Director Leon Panetta, for example, gave a speech in May 2009 in which he said that “[Drone] operations have been very effective because they have been very precise in terms of the targeting and it involved a minimum of collateral damage.”

But a month later, David Kilcullen, a former senior counterinsurgency advisor to the Army told Congress that, “Since 2006, we’ve killed 14 senior Al Qaeda leaders using drone strikes. In the same time period, we’ve killed 700 Pakistani civilians in the same area. The drone strikes are highly unpopular. . . . [a]nd they’ve given rise to a feeling of anger that coalesces the population around the extremists.”

It’s impossible to assess who is right. Because the operations are classified, we do not know the most fundamental facts about the targeted killing policy, including the number and identity of the people targeted, and how many of the dead are civilians.

Even without precise numbers, it is clear that civilian casualties, unsurprisingly, have a negative impact. In Pakistan, America’s most critical counter-terrorism ally, the Zardari government’s apparent inability to stop the attacks – and allegations that it has secretly agreed to them – threatens the government’s already shaky stability.

Perhaps the best evidence that targeted killings hurt humanitarian and counter-terrorism goals comes from Afghanistan. In July, Army General Stanley McChrystal, the top U.S. commander in Afghanistan, told troops to “back down” when there is a risk that civilians will be killed, even if that means enemy Taliban fighters escape. National Security Adviser James L. Jones told McClatchy at the time, “In one mishap you can create thousands more terrorists than you had before the mishap.” Why does this reasoning not apply to Pakistan?

Even the legal basis for the targeted killing policy in Pakistan is shrouded in secrecy. Is the CIA operating under the laws of war or some other law? Under the laws of war, only organized armed forces can kill during hostilities; civilian agencies like the CIA cannot. Who reviews CIA target selection and on what criteria? Unlike the military, which has the laws of war to guide it, we simply do not know how the CIA chooses targets and how many civilian bystanders it decides can be killed before it suspends an airstrike.

Why does the United States think it has the legal right to engage in killings in a country with which it is not at war? Does the Obama administration believe, as the Bush administration did, that the United States is “at war” with al Qaeda, wherever and whoever they are? If so, this argument threatens to make the entire globe part of the “battlefield.” It risks eviscerating carefully drawn categories the international community – often led by the United States – has developed over decades to minimize civilian harm and to protect the right to life of millions around the world.

Who, in any event, is a combatant in such a global war? It is now a cliché to point out that members of al Qaeda do not wear uniforms and do not function like a regular army – that is why they are not entitled to prisoner of war status. But if they are not combatants, they are civilians and, under the Geneva Conventions, civilians can only be killed when they are “directly participating in hostilities.”

The International Committee of the Red Cross recently clarified the meaning of direct participation in hostilities. Its guidance answers such questions as when it is legally permissible to target a member of the Taliban who is a farmer by day but who lays explosives at night. Because of secrecy, we do not know if the United States is abiding by these principles.

The issue comes down to this: It is not enough for decision-makers to say “trust us.” The stakes are too high and no government is infallible. To take just one example, in 2003, the CIA kidnapped a German citizen, Khaled el-Masri, from Macedonia and subjected him to five months of torture in a secret prison in Afghanistan. His turned out to be a case of wrongful identify. Mr. el-Masri is alive to tell his story. Victims of targeted killings do not have that option.

Targeting mistakes, more civilian deaths and policies that are illegal either in perception or in fact could result in terrible blowback. The only way to stop that from happening is for the government to clarify the international legal standards under which it acts, and to provide information about who is targeted and the consequences of any attack. The targeted killing policy needs to come out of the shadows.