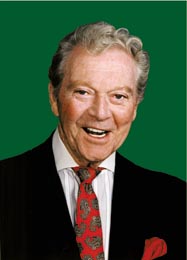 Also see: The CIA propaganda front Human Events rhapsodizes on the passing of the ultra-conservative bunkmeister, as well.

The Los Angeles Times reports that George Putnam, broadcasting legend, has died at 94.

Anyone who ever heard George Putnam’s voice would instantly recognize it. His flowing and booming voice was always rich with enthusiastic passion. It was impossible to correctly guess his age judging from his voice alone. When broadcasting, it seemed the airwaves quivered and trembled from the amount of bass in George’s voice.

My limited interaction with the George Putnam show came not long after I was hired by The John Birch Society in mid-2007. After having received a call from George’s long-time producer Chuck Wilder inquiring about a guest for the show, I spent some time asking a few key JBS staff about George and his radio program. The overwhelming opinion was that George was top-notch and well worth the time to set-up a guest.

I confirmed JBS President John McManus as a guest, informed staff of the upcoming show and set-up a reminder to myself to listen to the program. The day of, I dialed into the broadcast through the Internet and found myself mesmerized by his style and compassion for the truth. Opening the show was a a quick clip from a song by Harry Nilsson (Everybody’s Talkin’) made popular through its exposure in the movie “Midnight Cowboy.” Having liked the song growing up and not having heard it in a long time, it grabbed my attention right away.

George’s style was always one of a gentleman. Always courteous and fair to his guests and callers. During that interview, he touched on a number of issues, as well as asking about the Society, its mission and recent activities. During this interview and several thereafter, he always asked about the Society, giving us a chance to share with listeners. He or Chuck must have been subscribers to our news magazine,The New American. Many times I would get a call or email from Chuck after a new issue of the magazine was published asking for a guest for the cover story.

On one occasion, no one here was available, and not wanting to turn down an opportunity, I agreed to be on. We discussed illegal immigration and the half hour flew by. George made my short time on his show very comfortable. He didn’t take calls during this time, but I learned later on that he didn’t screen his on-air calls, which is standard for today’s talk shows. But it does make for interesting radio!

George was in broadcasting for more than 70 years, spending more than 30 years with producer Chuck Wilder. You can listen to the memorial show played on Friday, September 12, just hours after he passed away.

Fighting health problems, he had given his last regular show in May of this year, but came back in July for a show celebrating his 94th birthday. I feel highly privileged to be one of his last guests.

The lyrics in the show’s opening song describe a person going on a journey:

I can’t help but think of the journey George must be on. If there is a radio frequency in Heaven, I’m sure George is on it at high Noon, his preferred time.