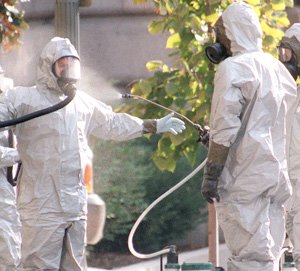 Sen. Charles Grassley and Rep. Rush Holt want hearings into the Justice Department and FBI’s handling of the case.

WASHINGTON — After seven long years, the FBI and the Justice Department say they are closing the books on the anthrax investigation.

But the investigation into the investigation is only beginning, and it will focus on what Congress members described Thursday as apparent missteps by authorities that dramatically prolonged the probe, unfairly maligned an innocent government scientist, and raised questions about whether federal agents had conclusively ruled out other suspects besides microbiologist Bruce E. Ivins.

Sen. Charles E. Grassley (R-Iowa) and Rep. Rush D. Holt (D-N.J.), frequent critics of the FBI, demanded a far more detailed release of documents by the bureau and the Justice Department to support the government’s case, as well as congressional hearings into the investigation.

Grassley sent a three-page letter Thursday evening to Atty. Gen. Michael B. Mukasey and FBI Director Robert S. Mueller III, giving them two weeks to respond to 18 questions that raised concerns about virtually every aspect of the probe.

Holt, who represents the district from which the anthrax-laced letters were mailed, said in an interview that he was reaching out to other House members to discuss a combined inquiry of sorts by the judiciary, intelligence, science and technology, and government oversight committees.

“We don’t want this to be another Lee Harvey Oswald case where the public says it is never solved to their satisfaction,” said Holt, referring to conspiracy theories surrounding President Kennedy’s 1963 assassination. “Somebody needs to finish the job that would have been finished in a court of law.”

Other than Congress, he said, “I’m not sure where else to do it.”

Ivins, a researcher at the government’s biodefense lab at Ft. Detrick, Md., apparently killed himself last week as authorities were preparing to charge him with murder. The 2001 attacks killed five people, sickened at least 17 others, and sparked one of the largest and costliest criminal investigations in U.S. history.

On Wednesday, senior officials in the Justice Department and the FBI gave private briefings to those affected by the attacks and to members of Congress; released a trove of previously sealed documents; and held a news conference, all in an effort to convince the public that they could have proved in court that Ivins was the lone culprit — if they’d had the chance to charge and prosecute him.

But by Thursday, a chorus of skeptics had taken to talk radio shows and the Internet. They homed in on government admissions that at least 100 other people may have had access to the particular batch of anthrax that was ultimately linked to the deadly mailings, and that Ivins had never been conclusively placed near the mailbox in New Jersey from which the letters were sent. They also questioned why the FBI and the Postal Inspection Service allowed the public to believe that another researcher at Ft. Detrick, Dr. Steven Hatfill, was the sole culprit for more than a year after they apparently began to believe he was innocent. Hatfill recently received a $5.8-million settlement from the government.

Maureen Stevens, the widow of Robert Stevens, a Florida photo editor who was the first victim of the attacks, held a news conference Thursday calling on the government to admit to faults in its investigation and pay additional millions to her and possibly to other victims.

And numerous scientists and legal experts questioned the reliability of the evidence presented by the government, particularly the novel genetic tests that the FBI said proved that Ivins alone carried out the attacks. One of them was Holt, a physicist turned congressman, who said he wanted to see some level of independent inquiry that involved a wide array of experts who could deconstruct the scientific aspects of the investigation.

In his letter, Grassley also wanted to know how exactly the government zeroed in on Ivins, whether he had taken a lie-detector test, what was known about his deteriorating mental condition, and how investigators could be sure that no one else might have helped him in preparing or mailing the letters.

“The FBI has a lot of explaining to do,” said Grassley, whose staff has already started consulting experts and collecting information.

“They have been less than forthcoming with Congress throughout this entire process, and it deserves a full and thorough vetting.”

Man Charged in Miami With Threatening to Kill Obama
Aug 08