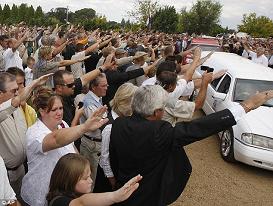 The World Jewish Congress, an international organization that represents Jewish communities and organizations in 100 countries around the world, has written a letter to the Ukrainian Orthodox Church expressing deep concern about the Church’s participation in neo-Nazi ceremonies in Ukraine.

The letter, addressed to Patriarch Filaret of the Ukrainian Orthodox Church, strongly condemned a recent ceremony near Lviv marking the 70th anniversary of the creation of the Galician division of the Waffen SS, in which Ukrainians fought on the side of Nazi Germany. From the WJC website:

In late July, Ukrainians wearing SS uniforms were photographed trudging through trenches and fire rifles in a reconstruction of a key battle against the Soviets during World War II. An Orthodox priest led a ceremony for fallen soldiers of the Nazi unit, sprinkling his blessing over several men sporting swastikas who lowered a coffin in a ritual reburial.

In his letter, [World Jewish Congress president] Lauder expressed hope that Filaret would use his “moral authority to prevent any further rehabilitation of Nazism or the SS, and that you will call on the clergy of your Church not to participate in any future ceremonies or events that glorify or legitimize a uniform that epitomizes the evil of genocide.”

Lauder also mentioned that Oleg Pankevich, a lawmaker for the extreme-right Svoboda party, took part in the reburial ceremony.

“As you know, leaders of Svoboda, like their counterparts in Jobbik in Hungary and Golden Dawn in Greece, frequently engage in anti-Semitic rhetoric that has ominous implications,” Lauder wrote the church leader.

Unfortunately for the World Jewish Congress — and the rest of the world — Svoboda is now a leading player in Ukrainian politics. 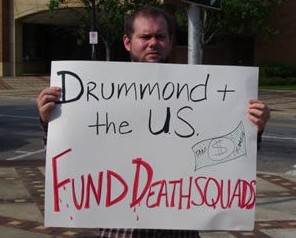