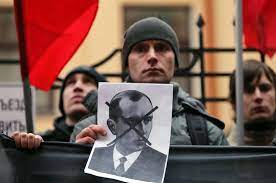 The U.S. has long had a hand in numerous projects intent on destabilizing Ukraine's governments.

A recent declassification of over 3,800 documents by the Central Intelligence Agency has revealed it operated two major programs intent on not only destabilizing Ukraine but ‘Nazifying’ it with followers of the World War II Ukrainian nationalist leader and Nazi collaborator, Stepan Bandera.

The documents, which were released earlier in the year, said that the programs spanning over four years provided funding and equipment for such anti-Soviet Ukrainian resistance groups as the Ukrainian Supreme Liberation Council, among a host of others.

The papers gave details of the AERODYNAMIC program which intended to destabilize Ukraine, using exiled Ukrainian agents in the West who were infiltrated into the Ukrainian Soviet Socialist Republic.

"The purpose of Project AERODYNAMIC is to provide for the exploitation and expansion of the anti-Soviet Ukrainian resistance for cold war and hot war purposes,” the formerly top secret document dated July 13, 1953 says of the project.

“Such groups as the Ukrainian Supreme Council of Liberation (UHVR) and its Ukrainian Insurgent Army (OUN), the Foreign Representation of the Ukrainian Supreme Council of Liberation (ZPUHVR) in Western Europe and the United States, and other organizations such as the OUN/B will be utilized," the document states. The CIA documents show that under the AERODYNAMIC program the CIA operated an affiliate project codenamed CAPACHO

According to the Signs of the Times magazine CAPACHO “took on more of a psychological warfare operation veneer,” with the CIA setting up a propaganda company in Manhattan that “catered to printing and publishing anti-Soviet ZPUHVR literature that would be smuggled into Ukraine.”

The AERODYNAMIC and CAPACHO projects continued in operation through the Richard Nixon administration during the 1970s.

But the U.S. continues to implement destabilizing projects in Ukraine.

The head of state had indicated his intent to move closer to Russia instead of the EU and the West.