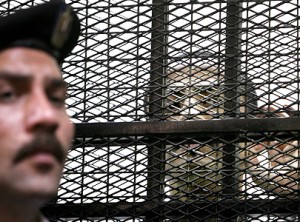 Breaking: Sources: Mubarak to step down tonight, CIA torture point-man to assume power 10 Feb 2011 Egyptian President Hosni Mubarak will step down as Egypt’s leader and Vice President Omar Suleiman will take over, NBC News reports. [This story will be updated.]

US officials ask Egypt to hurry changes [That’s because news broke that the FBI trained Egypt’s torturers.] 10 Feb 2011 US officials has claimed there is not enough reform rhetoric coming from Egypt. President Barack Obama’s spokesman, Robert Gibbs, has told reporters the demonstrations in Egypt will continue to grow until Egypt’s government makes the reforms the people of Egypt are demanding. With the Obama administration continuing to push President Hosni Mubarak’s government for greater change, there has been a rebuff from Cairo with Egypt’s foreign minister rejecting calls to lift a state of emergency.

WikiLeaks: Egyptian torturers trained by FBI 09 Feb 2011 The US provided officers from the Egyptian secret police with training at the FBI, despite allegations that they routinely tortured detainees and suppressed political opposition. According to leaked diplomatic cables, the head of the Egyptian state security and investigative service (SSIS) thanked the US for “training opportunities” at the FBI academy in Quantico, Virginia… In October 2009, “credible” human rights lawyers representing alleged Hizbollah detainees provided details of the techniques employed by the SSIS. The cable states: “The lawyers told us in mid-October that they have compiled accounts from several defendants of GOE [Government of Egypt] torture by electric shocks, sleep deprivation, and stripping them naked for extended periods.”

Egypt’s army ‘involved in detentions and torture’ –Military accused by human rights campaigners of targeting hundreds of anti-government protesters 09 Feb 2011 The Egyptian military has secretly detained hundreds and possibly thousands of suspected government opponents since mass protests against President Hosni Mubarak began, and at least some of these detainees have been tortured, according to testimony gathered by the Guardian. The Guardian has spoken to detainees who say they have suffered extensive beatings and other abuses at the hands of the military in what appears to be an organised campaign of intimidation. Human rights groups have documented the use of electric shocks on some of those held by the army. [Right, and guess who trained the torturers? Yup, that would be the USociopaths — your tax dollars at work. The GOP (and Obusha) claim there’s no money for Social Security and health care, but there’s *unlimited* funds to train terrorists to torture protesters.]

Those who wish to be added to the list can go here: http://www.legitgov.org/#subscribe_clg and add your name. Those who wish to unsubscribe can go here: http://lists.people-link.net/cgi-bin/mailman/listinfo/legitgov – you do NOT need a password to unsubscribe! If your email provider has marked this newsletter as spam, please mark it as ‘not spam’ and do not delete from a spam or ‘junk’ folder, as such actions trigger false spam complaints against the CLG. If you have any inquiries/issues with your subscription, please write: signup at legitgov dot org.