Why the US and EU Back Baltic Nazis

“It is nobody’s secret that the US actively backs these countries’ integration into Western Europe – and it turns a blind eye to the Nazi bacchanalia there. … “

By Vyacheslav Solovyov
The Voice of Russia | November 12, 2010 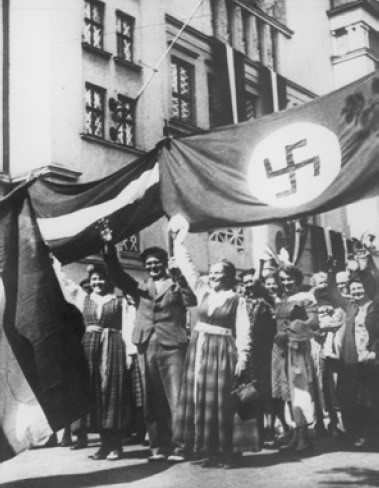 The Russian delegation in the UN General Assembly has suggested a draft resolution against inciting racism and Nazism. The document condemns any racial or national discrimination and any attempts to revaluate the outcome of WWII and glorify those who served German Nazis during this war.

The UN has been making such resolutions, by Russia’s initiative, for six years already. Moreover, the number of nations who support these resolutions grows each year – last year, there were 120 of them.

Still, while voting on these resolutions, the EU nations usually abstain, and the US even votes against.

Why so? American diplomats usually claim that such resolutions break the freedom to openly express one’s opinion. However, experts believe that this is not the real reason. Human rights activist Modest Kolerov shares his view:

“The US understands quite well that these resolutions, in the first place, are aimed against manifestations of Nazism in the former Soviet Baltic republics – Lithuania, Latvia and Estonia. Now, these republics are independent states which have entered the EU not long ago. It is nobody’s secret that the US actively backs these countries’ integration into Western Europe – and it turns a blind eye to the Nazi bacchanalia there.”

Glorifying those who collaborated with the Nazis during WWII and bringing down monuments to those who fought against Nazism has nearly become the official policy in Lithuania, Latvia and Estonia. Even high-ranking politicians sometimes take part in Nazi parades there. Russia has many times condemned this vicious practice.

Of course, the EU representatives would hardly dare to openly express any support to the Baltic neo-Nazis – but, on the other hand, they don’t want to quarrel with the US either. Thus they prefer to keep silent when somebody suggests a resolution aimed at stopping manifestations of Nazism.

The vote on the resolution suggested to the UN’s General Assembly by Russia is planned for the next week, and the final consideration on it – for mid-December. Well, let us see what the results will be.