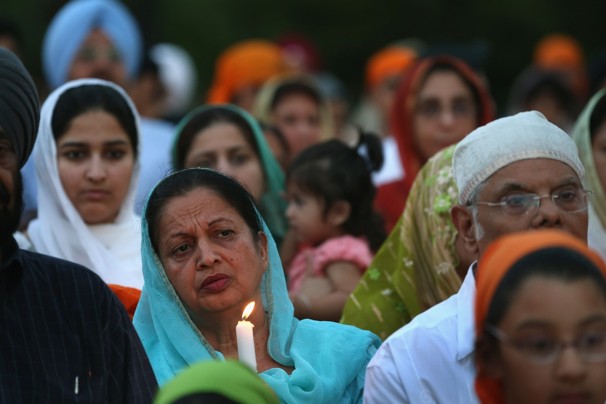 WHEATON, IL - AUGUST 06: Guests attend an interdenominational candlelight vigil at the Illinois Sikh Community Center August, 6, 2012 in Wheaton, Illinois. The vigil was held to honor the victims who were killed yesterday at the Sikh Temple of Wisconsin. Wade Michael Page, a suspected white supremacist, opened fire at the temple killing six people before being killed by police. (GETTY IMAGES)

The most dangerous enemy is the one who most resembles you. That is why the danger of white supremacy is so underestimated as a severe domestic terror threat. White supremacy is the true “homegrown” terrorism, dating back to the 18th century in the United States.

White supremacy is the greatest danger we as Americans face as a source of domestic terrorism, and one of the least recognized. It is difficult for law enforcement, as well as ordinary white Americans, to recognize the extraordinary threat coming from those who look like them in terms of race. That makes them all the more dangerous.

Indeed, not only was the SPLC the first to identify the shooter, according to an email from Morris Dees, sent to me and I presume others who support this reputable hate-watch group, but it had been doing pro-bono work on the dangers of white supremacy for law enforcement. The email stated, “Just two months ago, we [the Southern Poverty Law Center] distributed a special training video about the danger posed by racist skinheads like Page to tens of thousands of law enforcement officers – free of charge. This morning, [the morning after the Sikh Temple massacre] a number of law enforcement agencies told us that they would be urging their officers to watch it as soon as possible.”

Too little, too late? Not really. This is a kind of threat that has existed since New Testament times, and probably even earlier in human history, the threat of the one who looks like me is the most dangerous threat of all.

This summer I have been working on a book about the New Testament, and I have become aware of how those who wrote the Gospels regarded the threats in their time. The Gospel writers are aware, of course, of the threat coming from the Roman occupiers, but they are also aware of the threat posed by those much closer in their community, those Jews who do not agree that Jesus is the Messiah.

The “reformer” Jews who were followers of Jesus, the writers of the Gospels (composed between 70 and 100 C.E.), are trying to figure out why their own religious fellows reject them, sometimes violently. Matthew shows Jesus in a titanic struggle with the Jewish religious leaders of his time, the scribes and Pharisees, whom Jesus denounces as “child[ren] of hell.”(Matthew 23:15). This struggle reaches its Gospel climax in John.

At the deepest level, the struggle with those who are a threat to the early communities of those who follow Jesus is not with a stranger, far off, but is always actually an incredibly intimate struggle. It is not the struggle with the enemy who is very different, but with the friend, the neighbor and ultimately with the one who most resembled the followers of Jesus, other Jews.

For white Americans, such as me, and perhaps with many in law enforcement, the greatest struggle may be to recognize the threat posed by other white Americans, the so-called “skin-heads,” or white supremacists who espouse a “Neo-Nazi” ideology. It could seem that threats to our country would more logically be from aliens who are from other countries, or those who hold religious viewpoints other than the Christian beliefs that have been so much in the American majority for so long.

This, as the New Testament example teaches, is likely not the case.

In fact, being able to assess the extreme threat of white supremacy is critical to assessing the real threats against all Americans. Janet Napolitano, and the Department of Homeland Security, recognized the threat of recruitment by right-wing extremists in a 2009 report. This report indicated an increased risk of such recruitments due to both the election of the first African American president as well as the economic downturn. The report identified “disgruntled military veterans” as particularly vulnerable to this type of recruitment.

Right-wing groups and individuals such as blogger and activist Pamela Gellercried foul. The outcry was so loud, the U.S. secretary of Homeland Security was forced to defend her agency and her report, and she ultimately apologized to “veterans.”

Napolitano should not have apologized, it is now clear. The report did not target all veterans, of course, but described exactly the kind of person such as Page who should be of concern to law enforcement.

But Page is the intimate enemy, and thus, for white-dominated law enforcement, hard to see.

White supremacy is a huge source of domestic terrorism, and has been since the beginning of a slave society in this country. Slavery depended on terrorism against Africans who were enslaved in order to keep them in control. One of the crucial ideas that accompanied the violence, and the threat of violence that kept the slave system in place for so long, was the “supremacy” of the white race.

As H. Shelton Smith so well documented in his analysis of pro-slavery preaching, “In His Image, but…Racism in Southern Religion (1780-1910),” the idea of white supremacy depends on a fundamental theological error, that of the ownership of the image of God by the white race, and the denial of the total dignity imputed by God’s image to those of African descent held in American slavery.

The face of the “intimate enemy” as a domestic terror threat has now been exposed as a white face. This is a difficult concept, both in theological and in law enforcement terms.

Former president of Chicago Theological Seminary (1998-2008), the Rev. Susan Brooks Thistlethwaite is a senior fellow at the Center for American Progress.