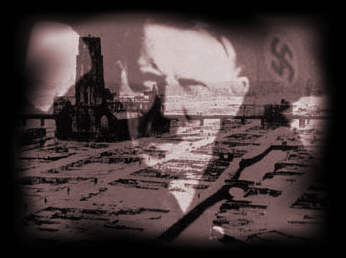 Paderborn is a small cathedral city which is well-served by Air Berlin flights from the UK. The reason for this is that it is home to a big UK military presence. There are about 4,500 troops in local army camps and a British population of 12,000. The cathedral is stunning and it is here, in 799, that Charlemagne was made the first ruler of the Holy Roman Empire. There is a bustling market, a Tractor Museum, “Germany’s smallest river” (so says the tourist board) and – on the outskirts, near the airport – a very strange castle that has a scary past.

We arrive at Wewelsburg Castle. It is shaped like a triangle, a yellow-stone structure with two towers topped by bell-like domes and one wider fortified tower, sitting on a hill overlooking fields spreading towards the airport. There are leaded windows with curtains drawn inside, dark dirt stains spreading across the yellow-stone walls from gutters, thin sprinklings of snow on the northern faces of the bell towers, plus a definite sense of menace.

Kirsten, my guide, is a bright-eyed thirtysomething, with trendy dark-framed glasses, a multicoloured scarf, red jumper, and bright red lipstick. 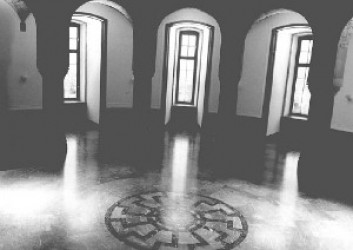 We enter the guard house museum, a two-storey stone building with an aubergine tiled roof. Inside, schoolchildren are being shown round a series of displays explaining the freakish plans Heinrich Himmler, head of the SS, had in mind at Wewelsburg. There’s a grainy black and white picture of Himmler taken at the castle, with his pudgy gerbil face, glasses, thin moustache and double chin.

"He wanted to make Wewelsburg the centre of the SS world," says Kirsten, as we pause by a sturdy medieval-looking chair whose leather back is inscribed with a jagged 'SS'. "He had a plan for a huge ring of buildings on the slopes above the castle. We don’t know exactly what he wanted to do with them. But it appears he wanted to make the north tower of the castle into an SS shrine of some sort. Where people could remember the SS dead. It would be at the centre of a new SS village. This would be where the Germanic elite group would live. Himmler wanted to create the cult of ideology here."

The architect’s plans, on a large yellowing piece of paper, are in a glass cabinet. They show the castle’s isosceles triangle shape, which the architect extended outwards into a large semi-circular structure that would have curved around the castle like some kind of Roman encampment.

Not shown on the plans is Wewelsburg’s concentration camp, on a plot of land just to the east of the castle, where it is believed 1,285 (possibly more) people died. "There were 3,900 prisoners. Some were Jewish, and there were German and Russian prisoners as well," says a subdued Kirsten. "It was a small concentration camp, but there were a lot of dead people. There were very bad conditions. Even worse than at some other camps. The SS did a lot of torture. And prisoners had to work long hours in the quarries."

Kirsten tells me that the castle was camouflaged during the war, but in 1945 the SS tried to blow it up, to prevent the Allies taking it. Himmler had collected a lot of valuables in the occupied territories, which he tried, with some success, to hide. After the war, the camp was turned into temporary accommodation for Germans who had left land reallocated to Poland - conceivably people moved from Szczecin - as well as villagers who had "given their land and homes to the SS and got bigger ones in occupied territories", but who returned as refugees.

We stop at a cabinet with a copy of an SS "death head" ring ("most real ones were taken by American troops? it’s easier to find originals in America than here"), an SS belt buckle with the phrase "My honour is my faith" written on it in German, and a copy of a letter written by Himmler signed off with "Heil Hitler!" 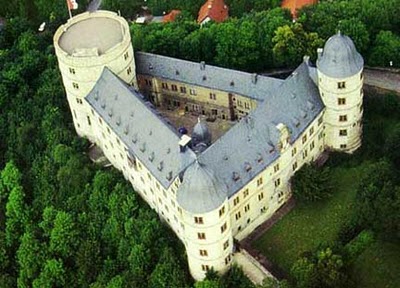 The crypt at the base of the north tower is one spooky place. We walk down a snow-trampled path, open a big metal door, and descend a few steps to a door of iron bars. Kirsten reaches into her pocket, pulls out a bunch of keys and opens the cage-door. We enter a damp circular room, with a central pit and a swastika engraved in ochre stone in the ceiling. We step into the echoing chamber.

"Normally tours can’t come into the crypt," says Kirsten. "We are a little afraid of what might happen." What do you mean, I ask. "Well, people from the right scene – neo Nazis – might come for celebrations or for demonstrations. There are some neo Nazis who come here – every weekend you get a few. You get four or five each day at the weekend – out of 200 or so visitors. Some of them have shaved heads – but you can generally spot them. Many ask to go in the crypt – which we will allow if people ask permission in advance. The neo Nazis that come here see it as a cult place. We will do special guided tours, but before we show them this place, they have to learn about the concentration camps first. They don’t cause any trouble. They know that if they did, they would not be able to see these rooms."

Kirsten gestures for me to step in the middle of the pit, with the swastika directly above me. "Say something," she says. And I do. It’s very, very strange. It’s also very, very disconcerting. It feels as though my voice is being swallowed up by the building, like it’s disappearing straight upwards into the small air vents surrounding the swastika. I don’t like to think that Himmler and, quite possibly Hitler, once stood here, experiencing the same sensation.

Upstairs is the "representation hall" or Hall of Supreme Leaders - another neo-Nazi haunt. The room is again protected by a cage-door, although entry will be granted if you ask ahead. The SS, apparently, regarded this as the centre of the world – and in the centre of the room, cut in green and black marble on the floor, is a symbol with 12 jagged arms branching off a black circle.

This symbol is very important to neo-Nazis. It is their symbol. It’s called the ‘black sun’ these days. The esoteric groups, they want to see it. This room and the crypt only survived because the man who was told to blow up the castle at the end of the war did not destroy the north tower. He didn’t know why he’d been asked to destroy the castle, so he just put dynamite in the other two towers,” says Kirsten, still wrapped in her scarf, peering out of her trendy dark-framed glasses. We stare at the symbol for a while and head out. The tour is over. I thank Kirsten. That was how a tour should be: no information overload, just stories and straightforward an
swers - about a very un-straightforward past.