Satanism?: The Saint of Death Cult 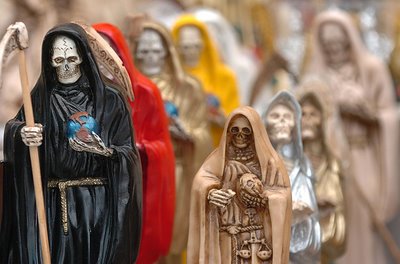 Praying to “La Santa Muerte” is a growing and controversial practice along the U.S./Mexico border. Worshippers hope “Holy Death” will bring them love, luck and peace.

Although the Catholic Church has condemned the worship of “La Santa Muerte”, many people insist on praying to this figure for miracles.

An investigation by Texas television station KGBT-TV began in Ciudad Victoria, Mexico — the capital and heart of the State of Tamaulipas.

On any given day, Ciudad Victoria residents enjoy the city’s main square plaza with live music, someone shinning shoes, clowns entertaining and food stands offering a variety of quick meals.

The city’s Roman Catholic Cathedral is right in front of the square. And only a block from the church, is “El Mercado”, or The Market, where Action 4 News found numerous artifacts of “Santa Muerte” or “Holy Death.” That’s where KGBT met Claudia Lopez, a faithful follower of Santa Muerte.

“Many people believe in Santa Muerte,” Lopez said. She said the folk saint responded to her prayers after someone recommended it to help her solve a personal problem.

“I made an offering to Santa Muerte and it worked,” she said. “I’m not sure if it was a coincedence or a miracle, but my desires were fullfilled.”

The devotion to “La Santa Muerte” has grown steadily in Mexico over the last decade. But market shop owners tell us the popularity has increased over the last five years.

“Followers ask for money, protection from harm, to attract a person, health and help in legal problems,” said a market shop owner who didn’t want to be identified.

Shop owners do a brisk business selling images of “La Santa Muerte” in all sizes, and wearing tunics of all colors, candles, books, figures, healing potions, and amulets.

KGBT cameras also traveled outside Reynosa where found a small shrine built in honor of this so-called saint. The shrine is located about 5 miles west of the city on the Reynosa-Nuevo Laredo Highway. Other elaborate shrines or altars to the “Holy Death” are popping up on major roadways and appearing next to those of Catholic saints. KGBT found a second one located about 10 miles west of Reynosa. This is reportedly visited by many worshippers, including drug traffickers. Maria Guadalupe is in charge of maintaining this altar and told us the meanings of colors in worshiping Santa Muerte. 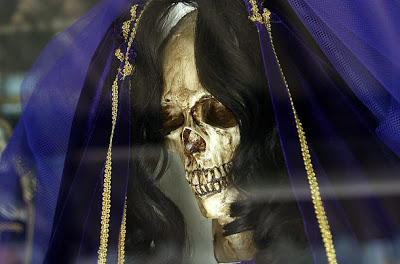 “Red is for love, white is for protection, black is for problems, blue is for education, green is for good luck, and the one with seven colors is for everything, the most powerful,” Guadalupe said.

A growing number of immigrants who come to the United States are reportedly bringing the practice of “La Santa Muerte” with them.

“It’s a satanic cult,” Nicolau told KGBT. “We have declared that is a satanic cult.” The Catholic Church does not recognize or accept worshiping of “La Santa Muerte”.

Like other Christian denominations, the Catholic Church is now having to address the issue by reenergizing the faithful back to Christ.

“The only person who can make miracles is God,” Nicolau said.

At the same time, U.S. law enforcement officials have linked the cult to violence committed by drug traffickers and prostitution rings. Small altars in honor of “La Santa Muerte” are becoming a common scene at stash houses in South Texas.

“I improved economically with Santa Muerte, just when I was about to file bankrupcy,” Murillo explained.

As a faithful follower of “La Santa Muerte” for several years, Ignacio said he gained influence and money. But he said he became an alcoholic and almost lost his family.

“People begin with incense, candles, to undescribeable things, like obtaining items from a cemetery, human remains to acomplish what you want,” Murillo said.

Ignacio became a born-again Christian about a year ago. He said his life now has a meaning and a purpose. That’s something he said he lost when he used to worship the “Holy Death”.

Murillo told KGBT that he now reads the Bible where he finds the guidance of God for his life. …

The “Santa Muerte” is followed by many different people with different backgrounds. Often those who pray to this religious figure are seeking the safe return of kidnapped family members, stolen items or better health.

Christianity speaks out against worshiping “Santa Muerte” linking it to black magic, satanism and cults. But it can be easily found in Mexican markets and herbal shops in the United States.

People are looking to find something to solve just about anything and many customers like Claudia in Ciudad Victoria believe the “Holy Death” is the answer.

Previous Article
Visual Arts: Grappling with Fascism’s Genetic Obsessions
Next Article
How can we stand by as genocide again threatens the Congo?

How can we stand by as genocide again threatens the Congo?
Nov 06