Photo: The villa now belongs to the municipality of Rome and was renovated in 2006

" ... As the war turned against him, he feared for the safety of his family - how could they be protected from any Allied air raids? ... ”

The extensive air-raid shelter that Benito Mussolini had built under his home gives a flavour of the fears that must have haunted the Italian dictator's final days.

The Via Nomentana is an avenue like many others in Rome. Taxis and motorbikes hurtle along it in the summer heat but, half-way down, through a set of iron gates, lies another world - the cool and the calm of the gardens of the Villa Torlonia.

A lawn, shaded by palm trees, rises up a slope and a path lined with flowers leads to the villa itself - grand and imposing. For 18 years, this was the home of Benito Mussolini, his wife and their children.

In this beautiful place, Italy's dictator, Il Duce, lived out his rise and fall.

The villa is a museum now and, as you wander through its marble halls, it is easy to see that - for a time - life here for the Mussolinis was very good indeed.

The ballroom is lit by low-hanging chandeliers and above them, on the ceiling, painted angels go gliding through the heavens.

Mussolini's bedroom is still much as he would remember it. You can almost see him throwing open the tall green shutters on a summer night, letting in any breeze that might emerge from the trees beyond the balcony.

Black-and-white photographs show how Mussolini spent his days at the villa.

Out on the fine white gravel of the driveway, you see him pictured as a swordsman, practising his fencing - Il Duce's stocky frame presenting a rather large target for his coach. 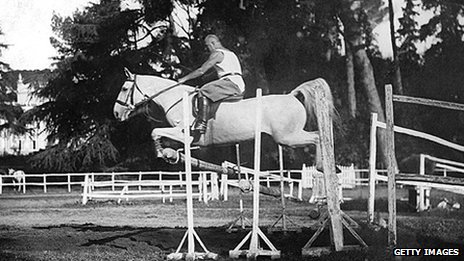 In one photo, he is on a white horse, easily clearing a jump on a riding track in the grounds.

Another shows the dictator on the tennis court wearing a cap to protect his bald head from the sun. But he is much more smartly dressed when we see him welcoming to his home an Arab diplomatic delegation.

And in one of history's stranger encounters, Mussolini once entertained Mahatma Gandhi at the villa. We can only imagine what the famously restrained, pacifist Indian was thinking as he sat and watched his host - this strutting, vain man - consumed by a passion for power and conquest.

But the dictator's grand ambitions had of course set his nation on a route to defeat and disaster and, in his quieter moments, in the luxurious surroundings of the villa, Mussolini must have gradually begun to realise just how badly he had over-reached himself.

As the war turned against him, he feared for the safety of his family. How could they be protected from any Allied air raids?

His own Italian forces had used bombers in the colonial war that he had unleashed in Abyssinia in 1935. Now Mussolini worried that he himself might be targeted in the same way.

At first the answer seemed to lie in a cellar out in the garden. A steel door was fitted and beds put in. But there was a problem. If there was a sudden terrifying attack, to reach the bunker the family would have had to come out of the villa and run across a lawn.

For a moment they would have been exposed to the falling bombs. So instead a new shelter was made inside the house. A basement was converted into a more sophisticated bunker.

Mussolini was afraid that the Allies might use gas bombs, just as he had in his African war and so this second shelter was fitted with airtight doors and a decontamination room where chemical residues could be washed off the skin.

But then Il Duce decided that even this was not enough. He began building another bunker, several metres below the villa.

Going down into it today, you feel a little as if you are descending into a submarine. The corridors are like huge tubes - cylindrical, for maximum strength. The walls stream with water that presses in from the damp earth and the construction of this dank and eerie place did not seem to put Mussolini's mind at ease - rather the opposite.

There were delays in the work and, as his enemies closed in, he confided to his diary that he worried that the bunker would not be finished quickly enough. Indeed it was not ready by the time Mussolini was forced from power in Rome in July 1943.

He would eventually end up being shot and put on public display hung upside down on a street in Milan.

The last bunker stands now just as it did the day that work on it stopped and, looking around down there, you get a fuller sense of Mussolini's vast misadventure.

In the dazzling light and space of the house and its gardens, he set out on what he thought was a path to glory and greatness.

But his time at the villa would end in a desperate - futile - search for safety in the darkness deep beneath its foundations.