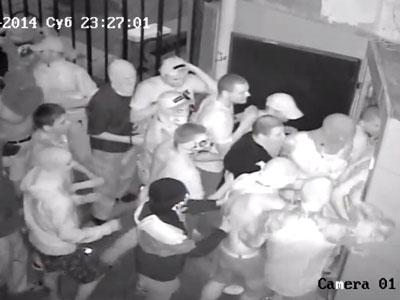 A violent gang of skinheads tried to force their way into a gay club in Ukraine’s capital on Monday.

A group of roughly 20 neo-Nazis tried to force their way into a gay club in Kiev, Ukraine, Monday, according to security camera footage obtained by U.K. LGBT site Pink News.

The Ukrainian Ministry of Internal Affairs told PinkNews that assailants threw a smoke bomb and firecrackers into the Pomada Club. Some of the skinheads, adorned with neo-Nazi tattoos like the Celtic cross and wearing masks, appear to be rubbing their eyes as they huddle around the door just outside the bar.

Although it’s unclear what prompted the attackers to flee shortly after entering the club, the video appears to show the club’s bouncer pushing the thugs back out onto the sidewalk outside.

While a group of patrons hurried into the club at the beginning of the video, presumably seeing the attackers approach from off-camera, Pink News notes that one patron was unable to get inside and took off running, with one of the skinheads in pursuit.

The attack comes after last weekend’s cancellation of Kiev Pride.

Watch the attack at the Pomada Club: