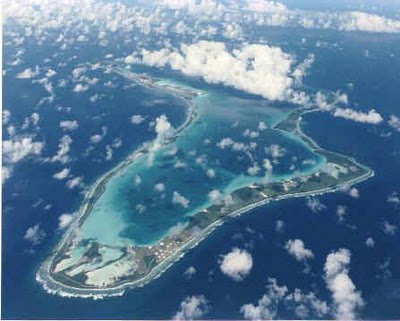 British officials are looking into the possibility that the CIA has been operating a secret prison for terror suspects for several years on British territory, according to the Guardian. It is suspected that the CIA has been running one of its “black site,” or undisclosed, prisons on Diego Garcia, a British-owned island in the Indian Ocean that is home to a large United States military base.

UK officials have asked the US about its operations on Diego Garcia on various occasions over the past three years, and the US has continually assured them no terror suspects have been held there, according to the Guardian.

At the same time, Barry McCaffrey, a retired US general who teaches at the West Point military academy, has twice publicly stated that the US does in fact hold terror suspects on Diego Garcia, most recently in December 2006: “They’re behind bars…we’ve got them on Diego Garcia, in Bagram airfield, in Guantánamo.”

"Across the world, the United States has progressively woven a clandestine 'spider’s web' of disappearances, secret detentions and unlawful inter-state transfers, often encompassing countries notorious for their use of torture."

Mr. Marty went on to say that Diego Garcia in particular was the international legal responsibility of the UK. The Guardian reports that while it is unclear whether the British government knows the CIA is holding terror suspects on the island or not, any evidence that proves MP knowledge of such operations would be a major scandal for the current Parliament.