By WILL LESTER (AP) 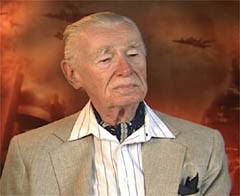 WASHINGTON — Angus M. Thuermer witnessed firsthand the anti-Semitic firebombings of synagogues and Jewish-owned businesses on a night of broken glass that came to be known as “Kristallnacht” as a foreign correspondent for The Associated Press in prewar Germany and covered the German invasion of Poland, before he was interned by the Nazis.

In later years, as station chief for the CIA in Berlin, he kept watch on the Cold War.

Even with those hair-raising experiences, Thuermer claimed to lack one essential possession as a young reporter in Nazi Germany. Jokingly, he told writer David Halberstam the importance of a trench coat to someone trying to be a foreign correspondent, “but as The Associated Press’ low man in Berlin, I was too poor to have one.”

While he became widely known as a CIA spokesman, Thuermer had a front row seat both as a newsman and CIA agent for some of the biggest moments in the 20th century. Thuermer died April 14 of pneumonia at a northern Virginia hospital at age 92.

Thuermer once recalled that he was the newest member of the AP’s Berlin staff at the time Germany was preparing for war. He covered Kristallnacht, saw a synagogue burn to the ground and even came face-to-face with Adolf Hitler when the dictator’s car slowly passed Thuermer. He later told about that encounter in an interview for the Newseum, the Washington museum devoted to the news business. He delivered one of the first eyewitness accounts of the German invasion of Poland, with a dateline of Gleiwitz, Germany — a central staging point for the attacks by Germany on Poland.

Before the U.S. declared war against Germany, Thuermer requested an interview with “British civilian prisoner No. 796”, as British author P.G. Wodehouse was known to the Germans, according to The Times of London. Wodehouse had been arrested in France and seized by the invading Germans.

In the presence of the Gestapo, Thuermer found Wodehouse in good spirits at the German prison camp. Thuermer’s report on Wodehouse went out on the AP wire over Christmas of 1940.

In late 1941, Thuermer had gone with his boss, Louis Lochner, to a Sunday dinner with German officials. He took a phone call about the Japanese attack on Pearl Harbor and relayed the news to Lochner, who got comment from the Germans and phoned it in.

Following the outbreak of war between the U.S. and Germany, Thuermer was one of more than 100 Americans who were placed under house arrest, and on Dec. 11 they were taken to a hotel at the hot springs resort of Bad Nauheim.

Each night, detainees tuned to the BBC on a radio receiver. Theurmer and a colleague published a clandestine newspaper until U.S. Embassy officials, fearing German reprisal, reclaimed their mimeograph machine. The senior U.S. diplomat (who took back the mimeograph machine) was George Kennan, known years later as the architect of the Cold War “containment” policy.

After five months, the Nazis announced an exchange of Americans for German diplomats and journalists in the United States. As their train rattled through France headed for Lisbon, a Frenchman stood near the tracks, “beret pulled down, half-smoked Gauloise hanging from his lip, waving an American flag,” Thuermer told AP writer Richard Pyle years later.

After his release, Thuermer served in the Navy, questioning German U-boat engineers. After the war, he went back to work for the AP in Chicago, later transferring to Washington before going to work for the government. Longtime friend Myron Belkind, a retired bureau chief in AP’s foreign service, said Thuermer had wanted to go overseas with the AP after the war, but when he did not get an opening in New Delhi in the 1950s, he decided he would join the government and see if he could get some foreign assignments, which he did.

Thuermer was born in Quincy, Ill., and after graduating from college, moved to Berlin to study German. While there, he got a job with the AP.

He had lived in Middleburg, Va., since the 1950s with his wife of 62 years, the former Alice Alexander, who had worked with Thuermer at the AP. He is survived by his wife; three children, Tina Thuermer of Arlington County, Va., Kitty Thuermer of Washington and Angus M. Thuermer Jr. of Jackson, Wyo.; and one granddaughter.