The nation’s top immigration court recently upheld the 2012 deportation order of Carlos Eugenio Vides Casanova, a former Salvadoran defense minister found responsible for the torture and killing of thousands of Salvadorans by military forces under his command during the 1980s civil war.

The problem is Vides has been living openly in this country since 1989 when he lawfully immigrated.

Residing in Palm Coast with his wife, he was awarded the Legion of Merit for outstanding service to the U.S. military. It was only in 2009 that he was first ordered deported for human-rights abuses — and he can fight the latest decision in federal court for years to come.

Layers of immigration laws developed after World War II were meant to block Nazis and other human-rights violators, like Vides, from entering the United States and to prohibit relief from deportation for those who lied to get visas and eventually become citizens. 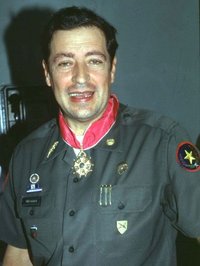 Former Salvadoran Minister of Defense Eugenio Vides Casanova is shown after receiving a medal, in a photo dated Dec. 12, 1988.[/caption]

Recent disclosures sadly show that many did not lie, but like Vides were invited and then protected from deportation by the U.S. government as a reward for their service.

For certain anointed persecutors considered useful to U.S. interests, particularly in support of anti-Soviet and other anti-leftist causes, immigration law simply vanished in a vortex of vulgar U.S. foreign-policy interests.

Last year, a trove of declassified government materials confirmed that since the late 1940s, the CIA, U.S. State Department, FBI and U.S. military hired, paid and protected more than 1,000 known Nazi scientists, SS officers and collaborators in support of the frenzied anti-Soviet policy of that era.

Observers note that the number of protected Nazis is likely much higher since many documents from that period remain secret.

Even as late as 1980, the FBI refused to tell the Department of Justice’s Office of Special Prosecutions — our own Nazi hunters — what they knew about 16 suspected Nazis living here. The records later showed the 16 had been FBI informants.

A logical question is whether and how the immigration service participated in usurping the very laws it is meant to enforce. A congressional subcommittee in 1974 found that a Nazi war criminals task force of the Immigration and Naturalization Service (INS) was “haphazard, uncoordinated and unprofessional.”

The newly released records show the INS was, at best, a bit player doing the bidding of U.S. intelligence and the State Department and, at worst, complicit in protecting known Nazis, and later other persecutors, by unlawfully granting them citizenship and otherwise shielding them from prosecution.

In 2007, Sen. Dick Durbin, D-Illinois, addressing a subcommittee hearing testimony of Vides’ torture victims, said, “What a cruel irony that we have constructed laws that exclude victims, but somehow have allowed those who are responsible for these hideous acts to find sanctuary in our midst.”

Durbin’s “somehow,” as it turns out, is decades of jostling of U.S. intelligence to protect persecutors on their payrolls — scrubbing their INS files clean, for example — and to block other agencies from prosecuting and deporting them.

For Christopher Simpson, author of a 1988 book on U.S. recruitment of Nazis, the influx of former Nazis and collaborators “was not simply an oversight or an administrative glitch created by the inefficiencies of the INS. It was rather a central...aspect of U.S. immigration policy of the day...”

While the wealthy, coddled Salvadoran human-rights violator continues to reside among us, today’s U.S. immigration policy is to detain Salvadoran families fleeing violence. The policy then allows the government to summarily deport Salvadoran children, whose families have, among other violations, likely suffered death and loss because of Vides and his U.S. handlers.

JORDANA A. HART IS AN IMMIGRATION ATTORNEY IN MIAMI.