WikiLeaks disclosed US military- maintained Iraq War Logs show that a "Wolf Battalion" or "Wolf Brigade" existed in Iraq, which went around terrorizing insurgents. The death squad was known for its brutality, known well enough that interrogators threatened detainees with the prospect of being turned over to the squad. Here’s what the Logs noted:

The 391,832 reports ("The Iraq War Logs"), document the war and occupation in Iraq, from 1st January 2004 to 31st December 2009 (except for the months of May 2004 and March 2009) as told by soldiers in the United States Army. Each is a "SIGACT" or Significant Action in the war. They detail events as seen and heard by the US military troops on the ground in Iraq and are the first real glimpse into the secret history of the war that the United States government has been privy to throughout. 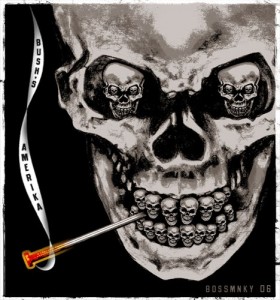 The London Guardian details the Wolf Brigade as:

"The Wolf Brigade was created and supported by the US in an attempt to re-employ elements of Saddam Hussein's Republican Guard, this time to terrorise insurgents. Members typically wore red berets, sunglasses and balaclavas, and drove out on raids in convoys of Toyota Landcruisers. They were accused by Iraqis of beating prisoners, torturing them with electric drills and sometimes executing suspects. The then interior minister in charge of them was alleged to have been a former member of the Shia Badr militia."

A retired American military man Col. James Steele was involved in the training of Iraqi forces, forces that operated like the Wolf Brigade. Journalist Dahr Jamail wrote about Col. Steele a few years ago:

"Retired Col. James Steele, who served as adviser on Iraqi security forces to then-U.S. ambassador John Negroponte, supervised the training of these forces.

“Steele was commander of the U.S. military advisory group in El Salvador 1984-86, while Negroponte was U.S. ambassador to nearby Honduras 1981-85. Negroponte was accused of widespread human rights violations by the Honduras Commission on Human Rights in 1994. The Commission reported the torture and disappearance of at least 184 political workers."

Col. Steele played a role in emboldening the El Salvador death squads. It can be surmised that he played the same role in Iraq.

Additionally, details in log entries from 2004 and 2005 indicate US infantry raids led to the handing over of detainees to the Wolf Brigade for "further questioning" multiple times. And, New York Times Writer is cited explaining, "US soldiers, US advisers, were standing aside and doing nothing."

“Much of the attention has focused upon reports of over 1,000 incidents of torture and detainee abuse by Iraqi government soldiers and police witnessed or reported to US troops. Rather than investigate or take action against Iraqi torturers, US troops were ordered to turn a blind eye to these abuses. In addition to ignoring the torture by Iraqi forces, the US was further complicit in that US forces knowingly turned over prisoners to Iraqi units known and expected to torture.”

The United Nations Special Rapporteur for Torture has called upon the US to investigate these torture claims. The British Deputy Prime Minister Nick Clegg has also called for an investigation.

Clegg said: "We can bemoan how these leaks occurred, but I think the nature of the allegations made is extraordinarily serious. They are distressing to read about and they are very serious. I am assuming the US administration will want to provide its own answer. It's not for us to tell them how to do that."

"People will want to hear what the answer is to what are very, very serious allegations of a nature which I think everybody will find quite shocking," the British Deputy Prime Minister further noted.

Rights groups also called for a probe, with the New York-based Human Rights Watch saying the United States may have broken international law if it knowingly transferred prisoners to potential places of abuse.

WikiLeaks, run by the reclusive Australian-born computer hacker Julian Assange, said the documents showed a total of 109,032 deaths in Iraq between 2004 and 2009 -- 66,081 of them civilians.