Nazism » The Story of Fritz Thyssen’s “I Paid Hitler” 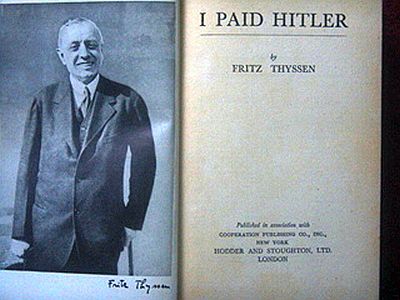 By all indication, my recent column, “Confidant to Hitler,” published in the Lake Placid News and The Virginia Gazette had a ripple effect.

It has described the effort the German Public Television is making to gather information about the role Fritz Thyssen, the head of Germany’s giant United Steelworks played in Hitler’s rise to power. Norman Shaifer, a New York publisher, and a close friend of the late Wendy Reves, after reading the column, searched through Emery Reves’ papers that had been given to him by Reves’ widow, in appreciation for Shaifer’s assistance through the years. He found among the papers the original contract signed by Fritz Thyssen, giving Reves exclusive publishing rights. According to Georgiana Hohenlohe, a representative of the German production company, Thyssen’s memoir, I Paid Hitler, will play an important role in the forthcoming documentary on the Thyssen dynasty, Thyssen’s memoir was published 1941 in the United States, and Reves, in the publisher’s foreword, wrote: “This extraordinary book has an extraordinary story… When, at the outbreak of war in September, 1939, Fritz Thyssen, the great German industrialist, fled from Germany to Switzerland, almost all the media and the publishers of the world tried to obtain his memoir, or at least the true story of his rupture with Hitler and his escape from Nazi Germany.” Reves pointed out that the story of the man who was one of the most powerful industrialists of Germany, and ardent German nationalist, the man who for more than fifteen years backed Hitler and financed his movement, and is now a fugitive whose property had been confiscated by Hitler, was a story everybody was eager to hear in a world in crisis. While a refugee in Switzerland, Thyssen was obliged to refrain from political activity. Not until the spring of 1940, when Thyssen arrived in Paris, was Reves able to approach him. As the president of Cooperation Publishing Co, Inc., an international newspaper syndicate that published the articles of 120 of Europe’s leading democratic statesmen’s worldwide, Reves had great credibility in Thyssen’s eyes. “Our first meeting was very cordial… He said that he was prepared to publish immediately the letters which he addressed to Hitler, Goering, and other officials after his rupture with the Nazis and in which he explained why he had left Germany.” Reves continued: “I saw Thyssen every day while he was in Paris. I asked him point-blank, ‘Do you want to help destroy Hitler or not?’ When his reply was an unconditional ‘Yes’ I tried to make him agree with me that the things he had to say and the documents he possessed must be published during the war and not after if they were to produce their full effect.” Once Thyssen decided to write his memoir he was most anxious to proceed as quickly as possible. Reves arranged that some of the papers Thyssen had deposited in the vaults of a bank in Switzerland were brought to Paris by a French diplomatic courier. He installed Thyssen and his wife at the Hotel de Paris in Monte Carlo. During the next several weeks, Reves worked with Thyssen on his memoir day and night. “We have interrupted the dictation only to have lunch together, where we continued the work in lengthy discussions,” Thyssen loved good food and the best wines, and Reves drove him to all the famous restaurants of the French Riviera. Among those were the Chateau Madrid, up in the mountains, the Colombe d’Or, in romantic St. Paul, and other establishments of gastronomic fame. Decades later, it was at the same restaurants that Reves told me about his dealings with Thyssen. He recalled that when he returned to Paris with the finished manuscript, the German army had already broken through at Sedan. He had to flee from Paris, driving for fourteen hours to reach the harbor of Bordeaux. Two days later, after the capitulation of France, an English destroyer, on the orders of Prime Minister Winston Churchill, rescued him. “I left my car and most of my belonging at the pier in Bordeaux, but was able to save Thyssen’s  manuscript,”  he told me. “After my arrival in London, I was urged to publish the Thyssen book  immediately. But I refused without knowing whether Thyssen was in a safe place.” Alas, Thyssen was captured by the Gestapo in France, was taken back to Germany, and was imprisoned in a concentration camp. In February 1941, Reves came to the United States, sent by Churchill to help orchestrate a public relations campaign on behalf of Great Britain and was extraordinarily successful in that endeavor. The publication of Thyssen’s memoir, under the title I Paid Hitler, was cited as an important part of that effort. Frank Shatz lives in Williamsburg, Va. and Lake Placid. http://www.lakeplacidnews.com/page/content.detail/id/502880/WORLD-FOCUS--The--manuscript.html?nav=5001

Hi from the Netherlands – I have a copy of “I Paid Hitler”, with the dust cover, published by Farrar & Rinehart Inc., New York 1941. On the hardback front cover are embossed the initials “fr”. I bought it at a flea market on 6 Sept 2015 for 2,50 Euro. The dust cover is a bit tatty, but the book itself is in super condition.