Nazism & the Rebirth of the German Military-Industrial Complex

” … On Aug. 10, 1944, principle German corporate leaders representing Krupp, Volkswagenwerk, Messerschmitt, Rheinmetall, Rochling, Büssing and other companies met with top German military and political personnel from the SS, Navy, and the Ministries of Armaments to prepare for a ;postwar commercial campaign’ after the eventual German loss. … They were instructed to place existing financial reserves at the disposal of the Nazi Party ‘so that a strong German empire can be created after the defeat. …  ” 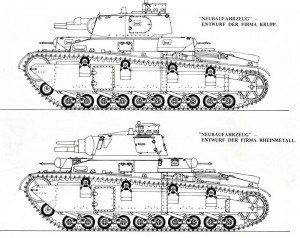 The German military-industrial complex went underground after the war, but it is back.

On January 18, MarketWatch columnist David Marsh wrote an article titled “German defense giant in the making.” Although he didn’t know it, the article was hugely prophetic. Since the end of World War II, building up large-scale defense companies has been taboo in Germany. But that taboo is now largely history, says Marsh.

Two of Germany’s top military manufacturers—Rheinmetall and MAN Group—have announced their intention to merge their military vehicle production. The resulting combine will produce a new national champion and leading supplier for wheeled military vehicles in Europe.

According to Marsh, the amalgamation, which has been in the works for a year, has been pushed by the political class. The German government is a big supporter of bulking up German military industry, and “has been providing behind-the-scenes assistance to make sure industry goes in the right direction,” reports Marsh. The new combine “meets the long-held German desire to build industrial companies with world scale in the defense field.”

Anyone who knows the history of Rheinmetall and man should be alarmed.

Rheinmetall has been at the forefront of German military manufacturing for over 100 years, so it isn’t too surprising that it again became a weapons builder after the World War ii loss. In fact, despite the Allies’ initial ban on arms production, Rheinmetall was back mass producing machine guns by 1956. By 1972, Rheinmetall had developed and begun selling the Leopard 2 battle tank.

Not much later, and after a series of corporate acquisitions, Rheinmetall became Europe’s leading military supplier of systems and equipment for ground forces, providing everything from artillery and munitions to communications, surveillance technology and guided missile systems. Rheinmetall subsidiaries, which also include significant automotive component manufacturers, are located throughout Europe, the Americas and China.

But here is the real reason the Rheinmetall-MAN Group alliance should be thoroughly scrutinized.

In 1996, the U.S. government declassified a top-secret World War ii document that exposed agreements made between several of Germany’s largest industrial giants and top German officials at a meeting just nine months before the war’s end.

According to the document, on Aug. 10, 1944, principle German corporate leaders representing Krupp, Volkswagenwerk, Messerschmitt, Rheinmetall, Rochling, Büssing and other companies met with top German military and political personnel from the SS, Navy, and the Ministries of Armaments to prepare for a “postwar commercial campaign” after the eventual German loss.

German industrialists must, the document said, “through their exports increase the strength of Germany.” They were instructed to place existing financial reserves at the disposal of the Nazi Party “so that a strong German empire can be created after the defeat.”

This document highlighted the exact worry that the Allies tried to address by seeking to destroy Germany’s future war-making capability. Franklin Roosevelt and Winston Churchill said, “It is our inflexible purpose to … ensure that Germany will never again be able to disturb the peace of the world. We are determined to … break up for all time the German General Staff that has repeatedly contrived the resurgence of German militarism; … eliminate or control all German industry that could be used for military production ….”

It is now blatantly evident that they failed! Both Rheinmetall and MAN Group (Büssing), which were named in the declassified report, have become dominant players on the world stage again. And Germany has become the world’s largest exporting nation and fourth-largest economy.

But a look at the astounding post-World War II success of the other above-mentioned four companies identified in the document not only suggests a postwar German commercial campaign, but a highly effective one.

Take steel and weapons manufacturer Krupp (now ThyssenKrupp). When Germany lost World War ii, the company was forbidden by the Allies to manufacture arms (as it was after World War i) and Alfried Krupp, the company’s owner, was convicted of war crimes, including the use of mass slave labor. He was sentenced to 12 years in prison and ordered to forfeit all his property. Later, however, the U.S. high commissioner for Germany granted him amnesty and restored much of his holdings. Alfried Krupp was released in the early part of 1951, and even though many of the Krupp factories, shipyards and steel and coal mines had been damaged, destroyed or dismantled, Krupp was still able to reestablish itself as a leading German company by the 1960s to continue its 100-year tradition of supplying Germany with the arms needed for war.

The speed at which ThyssenKrupp reestablished itself as a corporate giant was astonishing.

Today, ThyssenKrupp is one of the largest steel and technology groups in the world, employing about 184,000 workers in more than 70 countries. It is also a leading naval military supplier, building some of the most technologically advanced submarines, frigates and corvettes available. Its fiscal 2004/2005 sales of approximately $53.3 billion were generated in bulk from its roughly 600 foreign subsidiary companies, located in the UK, France, Italy and 13 other European countries. ThyssenKrupp also has operations in the United States and Asia. Not bad for a company that was all but destroyed in two world wars.

Volkswagen, another German corporation documented for its collusion with the World War ii Nazis, has become a very powerful and dominant automotive player on the world scene. Although its core market is the European Union, Volkswagen sales make it the world’s third-largest automotive company by revenue. Volkswagen owns the Bentley brand, international vehicle manufacturer Audi, Seat and Skoda, which manufacture and sell cars in Spain and in Southern and Eastern Europe, and Lamborghini, which makes sports cars in Italy.

Messerschmitt, Germany’s famous World War ii manufacturer that built much of the fighting aircraft behind Germany’s Luftwaffe, is also active and prospering today, although under a different name. Like Krupp, much of Messerschmitt’s infrastructure was destroyed in the war. Further, Messerschmitt was even forbidden to produce aircraft. Yet it too has risen from World War II to become part of a world-leading corporation. Messerschmitt was eventually allowed to build aircraft again, and in 1989, after several postwar mergers, Messerschmitt became part of Daimler-Benz Aerospace (another German industrial giant). Daimler-Benz Aerospace then later helped found the European Aeronautic Defense and Space Company (EADS), becoming a 30-percent owner.

EADS today is a global aerospace and defense technology leader. The group includes the aircraft manufacturer Airbus, and the world’s largest helicopter supplier, Eurocopter. It is also a major shareholder in mbda, the international leader in missile systems. eads produces the Eurofighter and other military aircraft. Galileo, the European satellite navigation system being constructed to rival the U.S.’s gps, is also being built in large part by eads. The company employs 113,000 people at more than 70 production sites, primarily in France, Germany, Great Britain and Spain.

Rochling, founded 184 years ago as a coal trading house, has now become a leader in high-performance plastics technologies. In 2004, the Rochling Group’s worldwide operations generated revenue of approximately $1.78 billion and employed 8,000 workers.

Yes, Germany’s war machine is back in fighting order. Just as predicted.

While Germany was but a pile of rubble after World War II, one man—Herbert W. Armstrong—warned that Germany would eventually rise again to dominate Europe and threaten the world.

As early as 1945, broadcasting immediately after a United Nations meeting, Mr. Armstrong warned that German industry was working toward the revival of a German empire. “We don’t understand German thoroughness,” he said. “From the very start of World War ii, they have considered the possibility of losing this second round, as they did the first—and they have carefully, methodically planned, in such eventuality, the third round—World War III!”

Peaceably, through corporate mergers and acquisitions, German corporations are reaching out beyond the borders of Germany to gain control of strategic industry. Even Germany’s most notorious World War II companies, which were severely disassembled and banned from future arms production by the Allies, have emerged as European and global powerhouses.

Be forewarned. Trouble out of Europe is coming, and Germany will be the driving force behind it. Germany’s recent corporate revival is just the precursor to a much larger and non-peaceable event. For additional information, read Germany and the Holy Roman Empire. •