" ... Calling the use of agent provocateurs 'a national policy issue,' Imam Walid criticized the use of paid informants inside mosques, intimidation by law enforcement and selective outrage by politicians. ... " 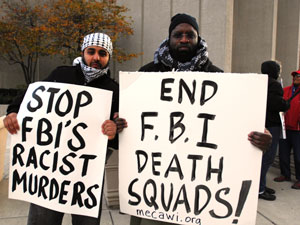 DETROIT, Mich. (FinalCall.com) - Activists continue to demand answers in the death of Imam Luqman Ameen Abdullah, the 53-year-old leader of Detroit's Masjid Al-Haqq gunned down by the FBI under suspicious circumstances.

Despite cold whipping winds, a spirited demonstration demanding an independent investigation into the shooting was held on Nov. 5 at the McNamara Federal Building. Supporters said the man described in the FBI's 43-page affidavit, and portrayed by the mainstream media as something of a Muslim mafia don, was not the man they knew and loved.

Filled with emotion, Omar Regan, Imam Abdullah's 34-year-old son, challenged the media to tell the truth about his father and challenged law enforcement to reflect on their own humanity.

Some in the crowd began to shed tears listening to his heartfelt words.

“The man has 13 children and none of us have a criminal record!” said Mr. Regan. “I want to say to the people, even the ones who are holding the badges and holding the guns, why don't you do your research and stop looking at it is as just a job? Find out—if you truly have a heart—and stop trying to just earn a check and learn how to be decent human beings! That's what I learned from my father! How to care about people!”

Members of the Michigan Emergency Committee Against War and Injustice and the Detroit Coalition Against Police Brutality spearheaded the rally to show support for Detroit's Islamic community.

The groups said the community has come under siege from federal and local law enforcement officials.

Members of the Nation of Islam were in attendance as well as Muslims from a variety of mosques in the Detroit metropolitan area and surrounding suburbs.

A broad-based coalition of activists have protested Imam Abdullah's death, including members of the Detroit Green Party, and many Christian pastors and organizations.

As the speakers addressed the crowd during rush hour, people drove by, honked their horns in support, and waved at those gathered.

Sandra Hines, an activist with the Michigan Emergency Committee Against War and Injustice and the Detroit Coalition Against Police Brutality, spoke at the demonstration.

It appears as if this whole incident that took place was entrapment by the FBI and it almost makes you feel that they may possibly be some kind of front group against people of color,” said Ms. Hines.

“They have not cracked down on these right wing groups,” said Abayomi Azikiwe, editor of the Pan African News Wire. “They have even shown up at events were the president was—armed. If we would have shown up someplace when Bush was president—armed—we would have been shot on sight,” Mr. Azikiwe added.

“We think people outside of the Muslim community have to take a stand on this. The Muslim community has been under fire since 9-11,” Mr. Azikiwe said. He called on President Obama and Attorney General Eric Holder to “stop the murderous policies against Muslims in this country.”

In an exclusive interview with The Final Call at the Michigan office of the Council on American Islamic Relations (CAIR), Imam Dawud Walid, the group's area director, and Ron Scott, head of the Detroit Coalition Against Police Brutality both expressed concern of what they believe to be a “neo-COINTELPRO” directed at organizations with Black Nationalist and Islamic leanings.

COINTELPRO was a covert operation employed by federal and local law enforcement to disrupt and destroy Black and progressive organizations during the civil rights and Black Power movements.

Mr. Scott said Black men labeled as “radicals” mixed with Islam are an “obvious target” and another primary issue is funding for law enforcement. The multi-jurisdictional task forces of the FBI and ATF, along with a number of agencies, want funding from the Justice Dept., so there is motivation to keep the threat level high, he said.

“The more threat they have, the more money they get, the more they are able to continue this, in addition to the fact of the actual bias,” said Mr. Scott. “There has always been a Black scare coming out with the COINTELPRO program of which I was a victim of, along with many others,” added Mr. Scott, a former Black Panther active with the organization in the 1960s.

Increased scrutiny of Islamic charities such as the Holy Land Foundation in Richardson, Texas, has had a “chilling effect” on American Muslim organizations nationwide, said Imam Walid. This “was only the first step” in a growing focus on charitable, humanitarian and service oriented groups with members who practice Islam, he continued.

Calling the use of agent provocateurs “a national policy issue,” Imam Walid criticized the use of paid informants inside mosques, intimidation by law enforcement and selective outrage by politicians.

In the final days of the Bush administration, former attorney general Michael Mukasey introduced controversial new FBI guidelines related to an initial threat assessment, he observed. Under the new guidelines, race and religion can be used as primary factors to begin an initial assessment without any real proof that anything is planned or whether any terrorism connections are present.

The religious leaders of the Council of Islamic Organizations of Michigan released a statement Nov. 6 decrying the use of informants and agent provocateurs sent into mosques on “fishing expeditions.”

As a standard procedure, the FBI dispatched a Shooting Incident Review Team following the fatal encounter with Imam Abdullah. The results of the review will be forwarded to the Justice Dept. Many activists say the FBI's nefarious dealing with Black people and organizations brings no confidence the agency can fairly investigate itself and the actions of field agents.

Dearborn police are involved in the investigation, which also troubles Mr. Scott. “The Dearborn Police Department has a horrendous and vicious history of racism and Islamophobia,” he said.

In the FBI's 43-page affidavit attached to the criminal complaint, Imam Abdullah is described as “a highly placed leader of a nationwide radical fundamentalist Sunni group consisting primarily of African-Americans, some of whom converted to Islam while they were serving sentences in various prisons across the United States. Their primary mission is to establish a separate, sovereign Islamic state ‘The Ummah' within the borders of the United States governed by Shariah law.”

Stemming from a federal investigation of the group which began in 2007, the FBI said Imam Abdullah and the other defendants are charged with running an interstate crime ring that received and sold stolen goods, engaged in mail and insurance fraud, illegally possessed firearms and body armor and tampered with motor vehicle identification numbers.

Andrew G. Arena, special agent in charge of Detroit's FBI office, has consistently said his agents acted appropriately on Oct. 28 when, according to the FBI, during a raid on a warehouse just outside of Detroit, Imam Abdullah refused to surrender. An FBI dog was dispatched to go after him and, according to FBI, after Imam Abdullah shot the dog, they fired, killing him.

The narrative delivered by the FBI is widely disputed.

Official autopsy results have not yet been released, which adds to the uncertainty, and necessitates an independent investigation, said activists.

Hodari Abdul-Ali, a radio host and chair of the Social Justice Task Force for the Muslim Alliance in North America, served with Imam Abdullah on the Majlis ash-Shura, the governing body which sets policy for the organization. He told The Final Call everyone should speak out against injustice, otherwise they might be the next victims.

“The FBI and all of these right wing racist hate-mongers with microphones are just stirring up this anti-Islamic fervor around the country and this is something that all right-minded people need to speak out against,” said Mr. Abdul-Ali. “I think of that statement Angela Davis made back in the day, ‘If they come for me in the morning, they'll come for you at night.'”

Imam Walid said after the initial report of the Oct. 28 shooting appeared in the media, he contacted many publications directly, protesting some headlines, challenging news reports and telling journalists not to simply “regurgitate the government line.”

When asked by The Final Call why it appeared as if the preliminary information about the shooting was so sensationalistic and inaccurate, he attributed the problem to “lazy reporting.”

“With so much left unknown in the developing case, MPAC is warning government agencies and media outlets of the alarming exploitation of this isolated incident that is stigmatizing Muslim American communities around the country,” said the Muslim Public Affairs Committee, in a statement.

“This imam was for the Yemeni community, for the Black community, for the Latino community. We know him as a person who feeds the hungry, opens his home, opens his mosque, he would give you the coat off his body for you to be warm,” said Ibrahim Aljahim, president of the Detroit-based Arab American Outreach.

“This was a set up by the government. We have to wake up and realize it. He was getting stronger and stronger and they didn't want that,” said Mr. Aljahim. Many strong leaders, such as Minister Louis Farrakhan of the Nation of Islam, are also feared and targeted, added Mr. Aljahim.

Mr. Scott agreed. “It is a very dangerous situation and it is being pushed via propaganda. And it is either allowed to be done, or planned, so that any potential unification of Islam whether it is between Arabs and African Americans, or unification of younger and older African Americans, and unification of any group of people who are in favor of progressive movement, that is what they are concerned about,” said Mr. Scott. “That is why I believe they are beginning to start a new movement and Muslims are an obvious target and African-American Muslims are a specific target.”