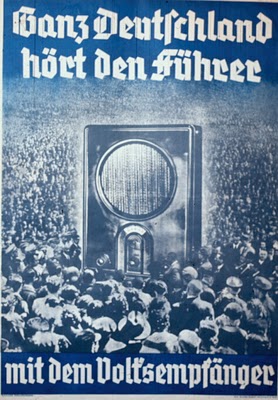 [The text translates: “All Germany hears the Führer on the People’s Receiver.” The Nazis, eager to encourage radio listenership, developed an inexpensive radio receiver to make it possible for as many as possible to hear Nazi propaganda. Courtesy of Dr. Robert D. Brooks]

In the 20th century it has been broadcasting that has most immediately documented our social and cultural history. Few researchers and scholars have made use of broadcast primary resources due to the lack of information on how to locate and the difficulty of obtaining broadcast material.

Radio program collecting starts with the ability to preserve sound. In 1877, Thomas Alva Edison invented the first Phonograph. It worked with a revolving cylinder, but did not produce very good sound. Edison obtains a patent in 1878.

In 1886, Emile Berliner applies for a patent on the first flat phonograph disc. That year Heinrich Hertz also demonstrates the existence of electro-magnetic radio waves. He links a spark gap, fed from a high voltage generator, to a sort of antenna. Similar antennas, at a distance, pick up something. Nobody knows quite what for some years to come.

The tape recorder is theorized in 1888 by Oberlin Smith as a piece of string dipped in glue and coated with iron filings. In 1893, Valdemar Poulsen, a Danish engineer, used wire to store magnetic impulses that could reproduce sound. In 1921, magnetic tape was first proposed. But it required further electronic development such as the 1924 Western Electric Corporation patent permitting electrical sound recording. In the same year, the loudspeaker supplanted the use of headphones….

In 1930, Germany’s I.G. Farben industrial company created the first magnetic tape. When I.G. Farben was broken up after WW II for producing the gas used in the concentration camps, BASF – one of its pieces – continued to manufacture magnetic tape.

Major recording innovations were introduced in the second half of the 1940’s. In 1943, both Optical Film and Wire Recorders were used to document the allied invasion of Europe at the Normandy beaches. When the war ended some people acquired home disc recorders. A small group of programs available today from the thirties and early forties were originally recorded on these recorders using 7″ discs which ran for 5 minutes a side. The wire recorder was also introduced for home use in the forties. During the war years, the Armed Forces Radio Service preserved a great many programs for rebroadcast to troops overseas. The AFRS disc has a brightness and lack of distortion that is hard to find even among network disc copies. Major recording innovations were introduced in the beginning of the 1940’s.

In 1943, both Optical Film and Wire Recorders were used to document the allied invasion of Europe at the Normandy beaches. Home tape machines such as the Brush Soundmirror using Scotch 100 paper tape supplied by the 3M Company were beginning to appear in the consumer market, but fell far short of professional requirements. 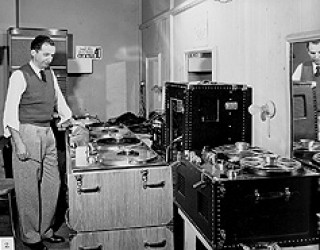 In 1945, Armed Forces (US) Col. John T. Mullin was part of a Signal Corps team investigating the military applications of German electronic technology. He was told by a British officer about a tape-recorder at a Frankfort, Germany radio station being operated by the Armed Forces Radio Service that had exceptional musical quality. There Mullin found German technicians working for AFRS using Magnetophone audio tape recorder/players.

The technological improvements of a constant speed transport, plastic tape impregnated or coated with iron oxide and the employment of a very high frequency mixed with the audio signal to provide “bias” made these machines hi-fidelity.

The first two machines acquired were turned over to the Signal Corps and Col. Mullin disassembled two other machines and shipped them to his home in San Francisco. In 1946, Mullin rewired and reassembled the Magnetophone machines and went into a partnership with Bill Palmer for movie sound-track work, using those machines and the 50 reels of tape he had acquired.

In October of 1946, Mullin and his partner Palmer attended the annual convention of the Society of Motion Picture Engineers. He demonstrated the machine to the sound heads of MGM, 20th Century Fox and the chief engineer of Altec Lansing. Mr. Mullin was then invited to an Institute of Radio Engineers meeting in May of 1947 to demonstrate the German Magnetophone. It was there employees of Ampex saw and heard the tape recorder. Shortly thereafter Ampex began its own developmental project.

Since NBC would not permit recorded programs Crosby took a year off and returned on the newly formed ABC network when his new sponsor, Philco, and ABC agreed to let him record on electrical transcriptions as long as his ratings did not fall below a certain mark. That process required cutting a record and re-recording (sometimes two or three generations) and quality of sound suffered. In July of 1947, after the initial demonstration of editing, John Mullin was invited to give a demonstration of his equipment for Bing Crosby’s producers by taping live side-by-side with transcription equipment the first show for the 1947-48 season in August at the ABC-NBC studios in Hollywood.

Bing Crosby Enterprises then negotiated financing for Ampex for exclusive distribution rights and Mullin was employed to record the Crosby show on his original German equipment until the Ampex machines would become available. With the original German tape-recorder’s and 50 rolls of BASF tape, Mullin’s first recorded demonstration show of August 1947 was broadcast over ABC on October 1, 1947.

In April of 1948, Alexander Poniatov and his team of engineers at Ampex in Redwood City, CA, introduced the first commercial audio tape recorder based on the Magnetaphone as Ampex Model 200.

Previous Article
Operation Sarkozy: How the CIA Placed one of its Agents at the Presidency of the French Republic
Next Article
Alaska Senator Is Indicted on Corruption Charges