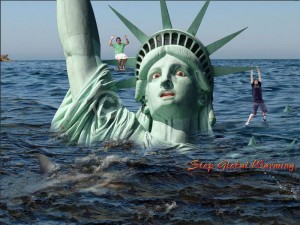 “Do you consult your dentist about your heart condition?” Kevin Trenberth, distinguished senior scientist at the National Center for Atmospheric Research, rhetorically asked in a letter to the Wall Street Journal in response to a letter by climate change skeptics. Trenberth, along with 37 other atmospheric scientists, oceanographers, and other climate experts, signed the letter, published on Feb. 1.

“You published 'No Need to Panic About Global Warming' (op-ed, Jan. 27) on climate change by the climate-science equivalent of dentists practicing cardiology. While accomplished in their own fields, most of these authors have no expertise in climate science,” continued Trenberth.

Some of the “No Need to Panic About Global Warming" signatories with dubious credentials as impartial climate science skeptics included:

Jan L. Breslow, M.D. – Breslow’s laboratory created the first mouse model of atherosclerosis William Happer, a Princeton physics professor and specialist in modern optics and spectroscopy – in the Daily Princetonian he likened climate change warnings to Nazi propaganda. Harrison H. Schmitt - Former US astronaut and geologist. The New Mexico Independent reported that Schmitt believed the Red Scare and the Green movement may be one and the same. Schmitt stated on the Alex Jones radio show in 2009 that after the fall of the USSR, communists went into the environmental movement. Roger Cohen – a Fellow of the American Physical Society and retired from ExxonMobil Research and Engineering Company.

Contrary to Trenberth's assertion, several of the signatories of the "No Need to Panic About Global Warming," letter were indeed climate scientists, including William Kininmonth, former head of climate research at the Australian Bureau of Meteorology and Claude Allègre, a French geochemist.

Allègre once warned of the dangers of climate change, but later recanted and stated that evidence doesn't support the notion that human activities result in a warmer atmosphere, reported the National Post of Canada. But Trenberth stated scientists like Allègre are a fringe in the field of atmospheric science.

"The few authors who have such expertise are known to have extreme views that are out of step with nearly every other climate expert," said Trenberth. “Research shows that more than 97 percent of scientists actively publishing in the field agree that climate change is real and human caused,” wrote Trenberth.

BLOG: Climate Skeptics: A US and UK Press Phenom

In nearly all fields of science, there are always some who hold extreme views out of step with the preponderance of evidence, noted Trenberth. He mentioned a retrovirus expert who does not believe HIV causes AIDS and scientists who believed that smoking cigarettes did not cause lung cancer.

Presenting the view of climate change skeptics is most common in the United States and United Kingdom, reported Discovery News a few months ago. The publication of the "No Need to Panic About Global Warming," letter seems to be an example of this phenomenon.

The debate over the physical effects of increased carbon dioxide concentrations in the Earth's atmosphere serves as a political football in the United States, reported Discovery News.

As a political and social issue, the U.S. news media tended to report on climate change using personalization, dramatization and novelty, regardless of the weight of scientific evidence for either side of the argument, according to a 2007 study published in Geoforum. The result was reporting that lacked information and distorted the situation.

The Wall Street Journal is owned by News Corporation, headed by media mogul Rupert Murdoch. News Corporation is the second largest media organization in the world. It owns 20th Century Fox, as well as numerous newspapers and tabloids.