Drew U. Conference Focuses on Hollywood’s Response to Hitler - The Constantine Report
0 SHARES

Media » Drew U. Conference Focuses on Hollywood’s Response to Hitler

"... Even before the Nuremberg Laws were passed in 1935 to deprive Jews of of their rights as German citizens, 'Adolf Hitler quickly called on the studios to not employ Jews in their German offices,' said Doherty. 'Paramount, 20th Century Fox, and Metro Goldwyn Mayer complied with Hitler’s demand' ..."

Movies and Nazism: the stories not told

Hollywood was slow to make anti-Nazi movies before World War II, and even more reluctant to show the reality of the Holocaust, according to scholars who assembled for a conference at Drew University.

While that may be strange for an industry led by a number of prominent Jews, it reflected the era’s politics, production codes, and business considerations, they said.

“Hollywood produced 242 movies during the war referring explicitly to the Nazis and 190 referring directly to Hitler,” said Susan Carruthers, a professor of history at Rutgers University’s Newark campus.

Sponsored by the university’s Center for Holocaust/Genocide Studies, it drew a mix of scholars, survivors, film buffs, and members of the Jewish community to the Madison campus.

According to Joshua Kavaloski, assistant director of the Holocaust/Genocide Studies center, until the 1961 trial in Jerusalem of Adolf Eichmann, a key architect of the Nazis’ internment and extermination of European Jews, “few Americans understood the magnitude of the crimes committed by the Nazis and their allies.”

Because “the German market was an important market” for Hollywood studios, most of which were led by Jewish immigrants from Europe, American moviemakers treaded gingerly — if at all — in treating the rise of Nazis and the persecution and murder of European Jews, according to Thomas Doherty, professor of American studies at Brandeis University. 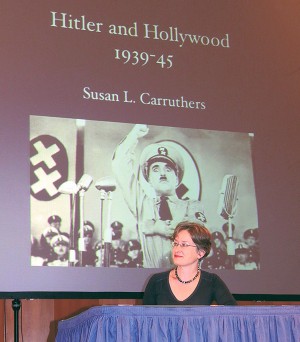 Susan Carruthers, a professor of history at Rutgers-Newark, seated below a poster for The Great Dictator, Charlie Chaplin’s satirical 1940 film portrait of Adolf Hitler. Carruthers said the Production Code, which laid out strict regulations of what could and could not be shown in Hollywood movies, prevented any Hollywood-produced anti-Nazi films until 1939.[/caption]

Even before the Nuremberg Laws were passed in 1935 to deprive Jews of of their rights as German citizens, “Adolf Hitler quickly called on the studios to not employ Jews in their German offices, said Doherty. Paramount, 20th Century Fox, and Metro Goldwyn Mayer complied with Hitler’s demand, while smaller studios such as RKO, United Artists, and Columbia closed down their offices in Berlin.

As a result, “there were very few images of Nazis on the screen, and from feature films, Americans had very little idea of what Nazism was” in the 1930s, he said. Part of the reason was that studio heads felt it necessary “to be a little quiet about this so we don’t enliven American anti-Semitism and we don’t want to have blowback on our fellow Jews in Germany.”

Movie moguls also had to contend with the studio-imposed Production Code, a strict set of content guidelines for American movies. Aside from its limits on expressions of sexuality, the Code banned “willful offense to any “nation, race, or creed” and “picturizing in an unfavorable light another country’s religion, history, institutions, prominent people, and citizenry.”

Banks would not approve financing for films perceived to be in defiance of the code.

“This basically means you can’t criticize any people on the planet,” Doherty pointed out. “You can’t go after a regime.”

Carruthers said the Code prevented anti-Nazi films until 1939, when Warner Brothers producedConfessions of a Nazi Spy. It was based on an FBI investigation of Nazi spy rings operating in the United States before America’s entry into World War II.

But enforcers of the Production Code took issue with the film. “To represent Hitler only as a screaming madman and a bloodless persecutor and nothing else,” said Code official Karl Lischka, “is manifestly unfair to his phenomenal public career, his unchallenged political and social achievements, and his position as head of the most important continental European power.”

No further anti-Nazi films were shown until June of 1940, when MGM released The Mortal Storm. It was essentially a love story between an anti-Nazi German man and a woman who is presented as a “non-Aryan.” The word “Jew” is never spoken.

New York Times film critic Bosley Crowther called the film “blistering anti-Nazi propaganda,” but suggested it should have been made much earlier.

And, said Carruthers, the author of the book upon which it was based, Phyllis Bottome, said she regretted that “MGM had so diluted the potency of her novel by refusing to announce a leading character’s Jewishness.”

Similarly, The Man I Married, released by 20th Century Fox in August 1940, concerned an American woman who weds a Nazi Party member, but, Carruthers noted, “its promotional posters made no allusion to Nazi Germany whatsoever.”

One audience member cautioned about judging the studios in the context of what we know today.

“Before we criticize the Jewish Hollywood studio moguls for not making more anti-Nazi movies, we have to remember that as glamorous and powerful as the studios appeared, they were nothing more than factories whose products were movies, preferably ones that were highly entertaining,” Barbara Wind, director of the Holocaust Council of Greater MetroWest, told NJJN. “They were manufacturers whose funding depended on Wall Street bankers, most of whom were not Jewish or predisposed to invest in films that might bomb at the box office.”

This conference will focus on how Hollywood’s interface with the socio-political-historical context of 1933-1945 fostered the creation of films that told only a limited story about the evolving repressive and genocidal Nazi regime. Our hope is that attendees will be able to use the information they gain to raise larger questions about how genocide and war have been covered in more recent Hollywood films. This seems an especially important issue for educators.

More specifically, we will explore how Hollywood’s interface with the socio-political context of the time fostered the creation of films that told only a limited story about the evolving repressive and genocidal Nazi regime. For example, Hollywood’s in-house censorship bureau, the Production Code Administration, sought to make sure that what could be perceived as anti-Nazi films would not endanger the market for American films abroad. The few Hollywood films of the 1930s that attempted to depict what was happening in Germany were often met with accusations of “war-mongering” and demands for congressional investigations into Hollywood’s “propaganda” efforts. Since so many Hollywood studio heads were of European Jewish background, these demands often became infused with anti-Semitism which was very much present among sectors of the American populace at the time. Indeed, it was not until after the United States actively joined the war in 1941 that films began to depict Germany as an enemy although these very same films barely hinted at the genocidal assault against the Jews that was occurring at the same time.

Our speakers all have expertise in the conference theme. We begin with a short talk about the importance of narrative/story by Dr. Joshua Kavaloski. Dr. Larry Greene will then describe the socio-political-historical factors surrounding the decisions being made in Hollywood; these include the debates between interventionists and isolationists about how involved the United States should be in European affairs as well as anti-Semitic tendencies in our country at that time. Dr. Thomas Doherty will then speak on the topic of his recent book, “Hollywood and Hitler: 1933-1939,” followed by Dr. Susan Carruthers who will focus on the years 1939-1945. The conference will conclude with an open discussion with all speakers; we anticipate that during this extended Q & A, discussion may gravitate toward the depiction of war and genocide in more recent films.