Intergraph publicists dote on civilian uses for its geospatial mapping and surveillance ware, but the company, based in Huntsville, Ala., is primarily a military and intelligence contractor. CEO James F. Taylor, Jr.: “Our market is about a third Army customers, a third Navy and the remainder mixed between the civilian side and the Air Force.”42

The Public Safety Division, where Rebecca Adams worked, is also active in the military and intelligence sectors. “Our public-safety business segment does 911-type dispatch management for local governments, entire countries and military bases.”43

But advances in geospatial imaging have created an expanding dual-use market, he says: “There’s been a big breakthrough recently with the satellite-based Global Positioning System. The Defense Department has descrambled the errors induced in the GPS data that decreased its value. That has really opened up commercial use of GPS and made it a useful referencing tool to track mobile resources.” 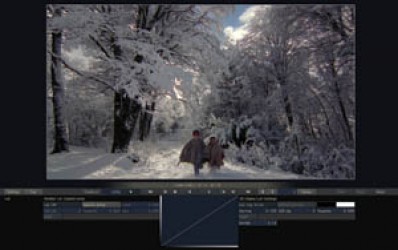 A spatial imaging console made by Assimilate, a company started up by Intergraph co-founder Jim Meadlock

Intergraph is “probably the biggest player in the world in terms of ongoing interactive command and control systems. We have SecureTrack for military installations, where we put up sensors around a facility instead of doing GPS tracking. The detection devices in the command and control environment are useful in hostile areas or for surveillance. We use everything from closed-circuit television to motion detectors. We do that for nuclear research facilities such as Lawrence Livermore National Laboratory. ” 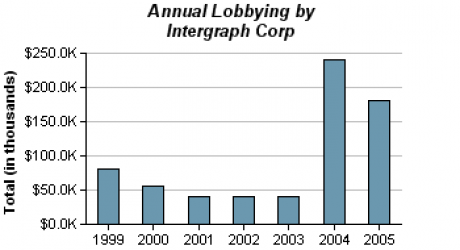 Intergraph makes no bones about the hand that feeds it: “We’re making money in areas like Afghanistan, Pakistan and our defense mapping work, where we’re surveying reconnaissance photographs and making detailed bomb analysis maps,” Taylor says.44

Intergraph has also gotten into the biometrics business “in our public-safety division, for fingerprint and retina identification.” The company also develops tracking and monitoring devices for use with a bulletproof vest that “gives feedback to the command and control system.” There are “military applications for it,” says Taylor. “We also are working on a military program for surveillance enhancement. When we use digital cameras that are moving, their images need significant enhancement. You can look for items of interest within the surveillance video and have those continue to be enhanced as the video plays. You could identify the hand of a suspect and determine whether there was a gun in it.”45

On January 23, 2005, Business Wire reported on the introduction of the technology at the first geospatial conference in London: Intergraph Mapping and Geospatial Solutions will demonstrate its geospatial intelligence solutions at DGI 2005.” The conference addressed the “gathering, analysis and dissemination of data and the role of spatial technology in addressing issues that have arisen from the expansion of the European Union, such as increased homeland security…. Intergraph’s geospatial intelligence solutions enable military and intelligence agencies to capture, create, manage, exploit and distribute geospatial information across organizations – addressing the need for interoperable, standards-based technology and services that integrate complex data into a single, functional picture.”46

In 2006, unscrupulous business interests had their eye on Intergraph’s patented imaging technology, but the company wasn’t exactly a model of business ethics itself. Past and present company executives have been involved in the establishment of fraudulent domestic CIA dummy fronts, cocaine smuggling, the privatization and overthrow of foreign governments, and such.

At this stage of the Comair crash investigation, cocaine will prove to be a critical lead. We’ve already established the unsavory connections of Darwin Deason, a major Republican Party financier, and his Affiliated Computer Services to the Bush syndicate and surrogates. A cocaine bust in Mexico leads to other Bush campaign financiers. After running down a few more names on the manifest, all of this blatant corruption will begin to congeal and make sense, but for now you resign yourself to collecting the data and follow the trail wherever it may lead.

It leads, as many current defense-related scandals do, with the Kovar-Wilkes- Abramoff-Hunter-Cunningham sleaze.

On January 6, 2006, Time magazine reported on the furtive existence of politically-explosive recordings: “The identity of those with whom the San Diego congressman met while wearing the wire remains unclear, and is the source of furious – and nervous – speculation by congressional Republicans.” The recordings have since shortened the careers of several congressmen, of course. Time reported: “Two men described but not named as co-conspirators in the original indictment – Brent Wilkes, the chairman of San Diego-based defense contractor ADCS Inc., and Mitchell J. Wade, the founder and until recently chairman and president of defense and intelligence contractor MZM Inc. – donated ‘more than a million dollars in the last ten years to a roster of politicians,’ … In some instances, those donations seemed to track closely with appropriations recommendations from politicians that benefited Wilkes’ and Wade’s companies.” 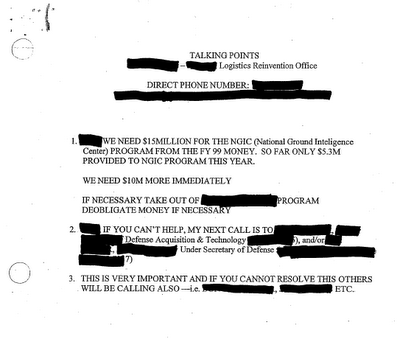 Among the politicians to lose face in the scandal, of course, was Tom DeLay, the untra-con congressional pit bull “whose Texans for a Republican Majority fund-raising committee received a $15,000 donation in September 2002 from Perfect Wave Technologies, a subsidiary of Wilkes’ corporate umbrella, the Wilkes Corporation.”

Texas Republicans – specifically financiers – will figure prominently in the Comair crash investigation. But you’re not aware of this now and read on:

Perfect Wave lived up to its name when the fortunes of the congressional Republicans capsized in the polls.

This scandal overlapped with a Pentagon spying scandal that has received scant press: “Some of the contracts awarded to companies whose executives Cunningham has admitted accepting bribes from are both national-security sensitive and highly controversial. Indeed, MZM Inc., the company founded and until recently chaired by Wade, the alleged number-two co-conspirator from the Cunningham plea agreement, has an active contract from the Pentagon’s troubling Counterintelligence Field Activity (CIFA) agency to conduct domestic surveillance on Americans, according to The Washington Post’s Walter Pincus.”

The surveillance has continued despite press exposure – On November 27, 2005, the Post reported, “Pentagon Expanding Its Domestic Surveillance Activity.” The Bush administration set out to expand the power of “a little-known Pentagon agency called the Counterintelligence Field Activity, or CIFA. The proposal, made by a presidential commission, would transform CIFA from an office that coordinates Pentagon security efforts – including protecting military facilities from attack – to one that also has authority to investigate crimes within the United States such as treason, foreign or terrorist sabotage or even economic espionage.”47

The announcement didn’t exactly meet with universal applause. “We are deputizing the military to spy on law-abiding Americans in America. This is a huge leap without even a [congressional] hearing,” Sen. Ron Wyden (D-Ore.), a member of the Senate Select Committee on Intelligence, said. Wyden’s objections soon gave way to compromise, however. He “persuaded lawmakers to change the legislation, attached to the fiscal 2006 intelligence authorization bill, to address some of his concerns, but he still believes hearings should be held.” Kate Martin, director of the Center for National Security Studies, observed in certain terms that the “compromise” was superficial and did little to protect personal privacy.

Martin said “the data-sharing amendment” would “still give the Pentagon much greater access to the FBI’s massive collection of data, including information on citizens not connected to terrorism or espionage.” The measure “removes one of the few existing privacy protections against the creation of secret dossiers on Americans by government intelligence agencies.”

The Pentagon’s intelligence agencies were “quietly expanding their domestic presence without any public debate.”48

If not for Intergraph, you come to realize, none of this would have come about … no indictments … no “culture of corruption” … no secret spying program … no bogus CIA dummy fronts … no illicit lobying … no cocaine arrest … but that’s Intergraph – to the military-industrial estate born …