Timeline of Treason: The Bush Family Connections to the Nazis

... William S. Farish was appointed chairman of Standard Oil by John D. Rockefeller. Farish was close friends with Hermann Schmitz, chairman of I.G. Farben. Farish hired Ivy Lee, to write pro-I.G. Farben and pro-Nazi propaganda and get it into the U.S. press. He hired Nazi German crews for Standard Oil tankers. In addition, he hired "Emil Helfferich," chairman of the Hamburg-Amerika Line, as chairman also of the Standard Oil Company subsidiary in Germany. Karl Lindemann, board member of Hamburg-Amerika, also became a top Farish-Standard executive in Germany. The interlock placed Farish and Prescott Bush in a small group of Hitler supporters. Both Emil Helfferich and Karl Lindemann were authorized to write checks to Heinrich Himmler, chief of the Nazi SS, on a special Standard Oil account. This account was managed by the German-British-American banker, Kurt von Schroeder. According to U.S. intelligence documents reviewed by author Anthony Sutton, Helfferich continued his payments to the SS into 1944, when the SS was supervising the mass murder at the Standard-I.G. Farben

Auschwitz and other death camps. Helfferich told Allied interrogators after the war that these were not his personal contributions-they were corporate Standard Oil funds.

Upon winning the presidency in one of the dirtiest campaigns in memory, Poppy Bush placed his assets in a blind trust headed by his close friend William Stamps Farish III. That appointment should have raised a red flag. Farish's grandfather, William Stamps Farish I, was a war profiteer during World War II. In defiance of the American embargo, Farish sold the Japanese the aviation gas used in the Pearl Harbor attack. The elder Farish also supplied Hitler's war machine with oil and tetraethyl lead. Senator Prescott Bush, Poppy Bush's father, was a close friend of the elder Farish. Even after his testimony before Harry Truman's committee on waste and fraud in the war industry prompted Senator Truman to cry, "This is treason!" Farish remained a Bush intimate. 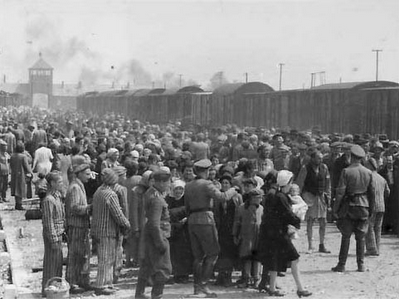 … I stayed in France until Sept. 17th. … In England I met by appointment the Royal Dutch (Shell Oil Co.) gentlemen from Holland, and … a general agreement was reached on the necessary changes in our relations with the I.G. Farben, in view of the state of war … The Royal Dutch Shell group is essentially British … I also had several meetings with … the British Air Ministry. …

I required help to obtain the necessary permission to go to Holland … After discussions with the American Amb. Joseph Kennedy … the situation was cleared completely … The gentlemen in the Air Ministry … very kindly offered to assist me later in reentering England. …

Pursuant to these arrangements, I was able to keep my appointments in Holland having flown there on a British Royal Air Force bomber, where I had 3 days of discussion with the I.G. representatives. They delivered to me assignments of some 2,000 foreign patents and we did our best to work out complete plans for a modus vivendi which could operate through the term of the war, whether or not the U.S. came in. …

Very truly yours, Frank A. Howard

The Bush family knew Richardson and his wife through their mutual friendship with Sears Roebuck's chairman, Gen. Robert E. Wood. General Wood had been president of the America First organization, which had lobbied against war with Hitler Germany. H. Smith Richardson had contributed the start-up money for America First and had spoken out against the U.S. "joining the Communists" by fighting Hitler. Richardson's wife was a proud relative of Nancy Langehorne from Virginia, who married Lord Astor and backed the Nazis from their Cliveden Estate.

General Wood's daughter Mary had married the son of Standard Oil president William Stamps Farish. The Bushes had stuck with the Farishes through their disastrous exposure during World War II... Young George Bush and his bride Barbara were especially close to Mary Farish, and to her son W.S. Farish III, who would be the great confidante of George's presidency.

... Missouri Sen. Harry Truman later roasts Farish in front of his committee investigating home front wrongdoing, an event that raises Truman's profile and makes him a plausible running mate for FDR in 1944. The exposure of the [Nazi} scandal is widely believed to have contributed to Farish's sudden death from a heart attack in November of 1942. 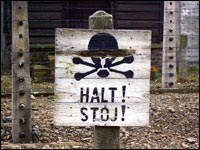 1942 March 25 U.S. Assistant Attorney General Thurman Arnold announces that William Stamps Farish has pled "no contest" to charges of criminal conspiracy with the Nazis. Arnold discloses that Standard Oil of New Jersey (later Exxon) of which Farish is president and CEO has agreed to stop hiding patents from the U.S. for synthetic rubber, which the company has in its possession, and which are already in use by the Nazis at Auschwitz.

1942 March 26 The first deportations of Jews to Auschwitz begins ... 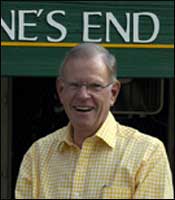 William S. Farish cited five current developments that give him optimism about the future of the Thoroughbred industry during his remarks as the honor guest at the Thoroughbred Club of America's 75th annual testimonial dinner, held at Keeneland Nov. 2. 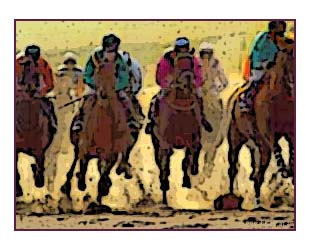 Farish, who recently was named to Keeneland's three-person board of trustees, was introduced by James E. "Ted" Bassett III, the man he replaced in that position. Owner of Lane's End Farm, Farish is the former ambassador to the Court of St. James in England, and he has served in many key industry positions, including vice chairman of The Jockey Club.

Bayard Sharp, 89, of Wilmington, Del., a thoroughbred breeder and owner, father of Sarah Farish of Versailles and London, England, great grandson of E.I. DuPont, died Friday, Aug. 9, 2002, at his home.

Sarah Farish is married to Will Farish, U.S. ambassador to Britain and a prominent Woodford County horse breeder and owner.

In addition to having raced many outstanding horses, Sharp was a former chairman of The Blood Horse Inc., a member and Steward of the Jockey Club, and a trustee emeritus of the Thoroughbred Owners and Breeders Association. He had been actively involved in the Republican Party in Delaware and nationally, and was a longtime friend and supporter of former President George Bush, and was chairman of the Delaware committee for Bush’s two presidential campaigns.

In addition to his daughter, he is survived by four grandchildren, Mary Johnston, Houston, Texas, Will Farish Jr., Versailles, Laura Chadwick, Nashville, Tenn., and Hillary Stratton, Houston; and 12 great grandchildren.

Private services will be held. The Chandler Funeral Home and Crematory, Wilmington, is in charge of arrangements.

Farish and the Bush family participated together in the Zapata Offshore Drilling Company. His grandfather founded Humble Oil & Refining Company in 1917, which became the largest subsidiary of what became Exxon, and was a founder of the American Petroleum Institute in 1926.

There was little, if any, surprise when President Bush chose William S. Farish as ambassador to Great Britain. Farish, a millionaire horse breeder and chairman of Churchill Downs, which hosts the fabled Kentucky Derby each year, is a big Republican donor and a close family friend of the Bushes, whom he has known for more than 50 years.

While one of the wealthiest men in Texas (fortune derived from Humble Oil, co-founded by his grandfather), he is extremely secretive. Close personal friend of George H.W. Bush, and a heavy Republican donor. Gave Bush their pet dog Millie, and he is the one who managed the then-Vice President's assets in a blind trust. Queen Elizabeth II has been a guest at Farish's horse ranch (Lane's End Farm near Lexington, Kentucky), and their horses breed with each other -- Farish is a horse breeder at the highest level, including winners of the Belmont, Preakness, and Kentucky Derby; he also for a time was Chairman of the Board of Churchill Downs. From 2001 to 2004 he served as US Ambassador to Great Britain, including during September 11 and aftermath.

President and owner of 1,800-acre Lane's End Farm near Versailles, Ky. ... Also leases 1,200-acre Oak Tree Farm north of Lexington from the NIARCHOS family ... Family: wife Sarah, and four children: Bill Jr., who heads the sales division of Lane's End, Mary Farish Johnston, Laura Farish Chadwick, and Hillary Farish Stratton ... Education: Attended the University of Virginia ... Farish earned an Eclipse Award as outstanding breeder in 1992 ... Received the 1992 P. A. B. Widener Trophy presented by the Kentucky Thoroughbred Owners and Breeders in recognition of outstanding accomplishments in breeding ... Other industry positions include vice chairman and steward of The Jockey Club, trustee of the Thoroughbred Owners and Breeders Association, board chairman and director of Churchill Downs, chairman of the Breeders' Cup Executive Committee, chairman of the American Horse Council, member of board of directors of Keeneland Race Course

Many of the corporate-funded right-wing foundations promoting family values in America -which are the sponsors of GW Bush and virtually all of his cabinet nominees – are advocates of eugenics, or as it is variously known, population control or scientific racism. The true picture of their own and the Bush families’ views on abortion and race – and of their direct links to groups like Planned Parenthood – is one of the least reported on news stories of the past few decades. At the dawn of the Twentieth Century American industrialists became alarmed at the rate of population growth among minorities and the poor. Millions of immigrants were arriving each year in America, dramatically changing the racial and ethnic profile of this nation.