The John Birch Society’s Apocryphal History of the Peace Sign 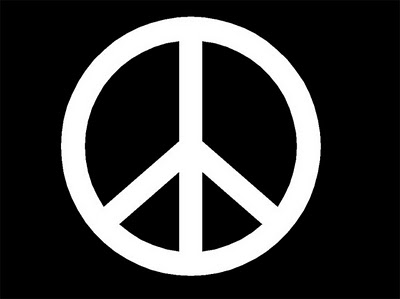 The John Birch Society cannot tolerate left-wing “collectivism,” and has contrived an apocryphal history of the peace sign intended to cast a pall over all things progressive by demonizing the ubiquitous symbol.

The Truth About the Peace Symbol

By Alan Scholl
Director of Mission and Campaigns for the John Birch Society.

Aside from the questionable wisdom of empowering homeowners associations to control and regulate the uses to which people may put their homes, the Pagosa Springs wreath controversy highlights once again the many misperceptions that exist about the origins of the peace symbol. Most people believe the symbol to be an innocuous expression of the desire for peace and cite as its “official” history, the fact that the symbol came into being in 1958 when a peace activist combined the semaphore letters N and D into a symbol of nuclear disarmament. Despite this, the symbol has a much deeper past in pagan antiquity and a much more sinister past in anti-Christian symbolism.

As a pagan representation, the symbol has its origins in the ancient Norse-Germanic alphabet known as Futhark. This, the language of the runes, was not displaced until the Fourth Century when Arian bishop Ulfilas (AKA, Wulfila) created a new Gothic alphabet based on Greek. In the original runic language, the cross element of the peace symbol first appeared in an upright orientation as the “algiz” rune. According to Carl D. Liungman’s Dictionary of Symbols, the sign “is possibly associated with moose…. In the family system [the rune] stands for man.” According to the same dictionary of symbols, when inverted, as in the peace symbol, the Algiz rune “is supposed to have been used by Germanic tribes as Todesrune, the rune of death. In the family system it means man dies.” In fact, the rune used as a symbol of death was employed by the Nazis during World War II. In 1970 the GOP, in its newsletter Political Potpourri, published the image of a Nazi propaganda poster that prominently featured the inverted Algiz rune.

It’s disturbing enough that the central element of the so-called peace symbol has been known since ancient times as the symbol of death and that it was used to signify such by the Nazis. But the symbol has also been used as an anti-Christian symbol. During the reign of the Roman Emperor Nero, Saint Peter was condemned to death by crucifixion. Saint Peter, though, could not bear to be crucified as Christ had been. He requested, therefore, to be crucified upside down. Nero granted his wish and the Saint was crucified, legend has it, on an upside down cross, the arms of which had been broken and were pointing toward the ground. Saint Peter is celebrated, rightly, as a great Christian martyr. But anti-Christians have frequently used the Nero Cross, essentially the peace symbol, to symbolize anti-Christ.

At least some, and possibly all, of this was known to those who created the modern peace symbol. Philosopher Bertrand Russell, who played a role in its adoption, was notorious for his socialist political beliefs and his anti-Christian bias. He was also thoroughly versed in ancient history and symbolism. Eric Austin was another member of the group that adopted the peace symbol in 1958. Austin campaigned for the symbol and wrote a pamphlet entitled The Campaign Emblem describing the symbol. Writing in the journal Peace Review in 1998, University of Bradford scholar Andrew Rigby noted that, at the time the peace symbol was being created, Austin “was reading a book on the runes, the ancient signs of the Norse world. He discovered that: in past ages the central motif of the current nuclear disarmament symbol, the ‘bent cross,’ had symbolized the death of man.”

The real mystery of the peace symbol is why a group of peace activists in the late 1950s would knowingly adopt a symbol of death as a symbol for peace. One explanation is that they were strongly influenced by Marxist-Leninism and sought peace by the same means as Lenin. “As an ultimate objective,” Lenin once wrote, “‘peace’ simply means Communist world control.” As a revolutionary who had come to power in a bloody coup, Lenin firmly held that world control would come through bloody world revolution, in other words, through the deaths of thousands if not millions.

For “peace” activists in the Leninist tradition, the peace symbol as death rune is unfortunately appropriate.

” … Symbols.com mentions that some people believe the peace sign was invented by Lord Bertrand Russell. … We simply typed Lord Bertrand Russell into Yahoo! and discovered an entire category dedicated to the good Lord. We checked out several of the sites, and although he is credited with being one of the most important logicians of the 20th century and a ‘renowned peace advocate,’ we couldn’t find anything about his contribution to the peace symbol.”
http://ask.yahoo.com/ask/19991004.html

The Campaign for Nuclear Disarmament responds:

” … There have been claims that the symbol has older, occult or anti-Christian associations. In South Africa, under the apartheid regime, there was an official attempt to ban it. Various far-right and fundamentalist American groups have also spread the idea of Satanic associations or condemned it as a Communist sign. However the origins and the ideas behind the symbol have been clearly described, both in letters and in interviews, by Gerald Holtom. His original, first sketches are now on display as part of the Commonweal Collection in Bradford.”
http://www.cnduk.org/index.php?option=com_content&task=view&id=435&Itemid=131

One of the most widely known symbols in the world, in Britain it is recognised as standing for nuclear disarmament – and in particular as the logo of the Campaign for Nuclear Disarmament (CND). In the United States and much of the rest of the world it is known more broadly as the peace symbol.

It was designed in 1958 by Gerald Holtom, a professional designer and artist and a graduate of the Royal College of Arts. He showed his preliminary sketches to a small group of people in the Peace News office in North London and to the Direct Action Committee Against Nuclear War, one of several smaller organisations that came together to set up CND.

The Direct Action Committee had already planned what was to be the first major anti-nuclear march, from London to Aldermaston, where British nuclear weapons were and still are manufactured. It was on that march, over the 1958 Easter weekend that the symbol first appeared in public. Five hundred cardboard lollipops on sticks were produced. Half were black on white and half white on green. Just as the church’s liturgical colours change over Easter, so the colours were to change, “from Winter to Spring, from Death to Life.” Black and white would be displayed on Good Friday and Saturday, green and white on Easter Sunday and Monday.

The first badges were made by Eric Austin of Kensington CND using white clay with the symbol painted black. Again there was a conscious symbolism. They were distributed with a note explaining that in the event of a nuclear war, these fired pottery badges would be among the few human artifacts to survive the nuclear inferno.

(These early ceramic badges can still be found and one, lent by CND, was included in the Imperial War Museum’s 1999/2000 exhibition From the Bomb to the Beatles)

What does it mean?

Gerald Holtom, a conscientious objector who had worked on a farm in Norfolk during the Second World War, explained that the symbol incorporated the semaphore letters N(uclear) and D(isarmament).

He later wrote to Hugh Brock, editor of Peace News, explaining the genesis of his idea in greater, more personal depth:

I was in despair. Deep despair. I drew myself: the representative of an individual in despair, with hands palm outstretched outwards and downwards in the manner of Goya’s peasant before the firing squad. I formalised the drawing into a line and put a circle round it.

Eric Austin added his own interpretation of the design: the gesture of despair had long been associated with the death of Man and the circle with the unborn child.

Gerald Holtom had originally considered using the Christian cross symbol within a circle as the motif for the march but various priests he had approached with the suggestion were not happy at the idea of using the cross on a protest march. Later, ironically, Christian CND were to use the symbol with the central stroke extended upwards to form the upright of a cross.

This adaptation of the design was only one of many subsequently invented by various groups within CND and for specific occasions – with a cross below as a women’s symbol, with a daffodil or a thistle incorporated by CND Cymru and Scottish CND, with little legs for a sponsored walk etc. Whether Gerald Holtom would have approved of some of the more light-hearted versions is open to doubt.

Previous Article
Will the Gotovina Trial be a BIG Embarrassment for the CIA??
Next Article
Northern Ireland: More evidence of MI5’s network of informers and provocateurs in the IRA

Northern Ireland: More evidence of MI5’s network of informers and provocateurs in the IRA
Mar 17