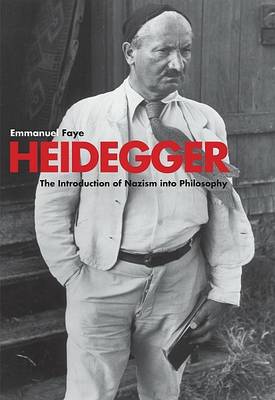 It may seem surprising that so many books continue to be written debating Martin Heidegger’s Nazi affiliations, since the fact that Heidegger was a Nazi has never been in dispute. How could it be, when the great philosopher took office as rector of Freiburg University in April 1933 specifically in order to carry out the Gleichschaltung, or “bringing into line,” of the school with Hitler’s new party-state? Didn’t he tell the student body, in a speech that November, that “the Führer and he alone is the present and future German reality and its law”? After the war, didn’t he go out of his way to minimize Nazi crimes, even describing the Holocaust, in one notorious essay, as just another manifestation of modern technology, like mechanized agriculture?

The history of Heidegger scholarship over the last 20 years has been the gradual demolition of this forgiving consensus endorsed by Arendt. On the one hand, Heidegger’s self-portrait as a misguided idealist turned dissident has been shown to be sheer fabrication. The philosopher, it is now clear, was a committed National Socialist for many years, an admirer of Hitler who purged Jewish colleagues, presided over a book-burning (though it seems rain may have prevented any books from actually being burned) and — unlike genuine dissidents — continued to teach, publish and travel throughout the Nazi period. At the same time, and more significantly, the alleged division between the man and the work has been thoroughly undermined, as scholars have examined the deep affinity of Heidegger’s thinking with the irrationalist and chauvinist ideas of the interwar German right.

What distinguishes Emmanuel Faye’s Heidegger: The Introduction of Nazism Into Philosophy, which was published to loud controversy in France in 2005, is that it takes these critiques of Heidegger to their logical extreme. Most readers would agree that Heidegger was a Nazi, and that this matters to his philosophy; it has remained for Faye to argue that Heidegger was a Nazi philosopher, which is to say that he was no philosopher at all, and that his books are positively dangerous to read. In fact, he comes very close, on the book’s last page, to saying that Heidegger’s collected works should be banned from libraries: “They are . . . as destructive and dangerous to current thought as the Nazi movement was to the physical existence of the exterminated peoples. . . . Hitlerism and Nazism will continue to germinate through Heidegger’s writings at the risk of spawning new attempts at the complete destruction of thought and the extermination of humankind.”

Faye, an authority on Descartes, is driven to this pitch of accusation by his study of the seminars, till now untranslated or unpublished, that Heidegger taught during 1933-35, in the first flush of his Nazi enthusiasm. In these classes, Faye proves beyond doubt, we do witness “the introduction of Nazism into philosophy,” the outright transformation of Heidegger’s thought into a tool of Nazi indoctrination. The more familiar a reader is with Heideg­ger’s work, the more shocking it will be to see him employ his key terms — being, existence, decision — as euphemisms for nationalism and Führer-worship. Thus we find him, in the winter of 1933-34, declaring that “the question of the awareness of the will of the community is a problem that is posed in all democracies, but one that of course can become fruitful only when the will of the Führer and the will of the people are identified in their essence.” At the same time, Heidegger tells his students — “many of whom,” Faye points out, “were to become combatants at the beginning of the following decade on the Eastern front” — that “to a Semitic nomad,” the “nature of our German space” is inherently foreign.

Faye’s achievement is to demonstrate, in these texts, the very fusion of man and thinker that Heidegger was later so concerned to deny. Yet the seminars and speeches Faye analyzes date mainly from the period 1933-35 — that is, the year of Heidegger’s rectorship and just afterward, when his Nazism was flagrant. To show that he remained a Nazi until 1945, or even for the rest of his life, would require finding similar kinds of propaganda in Heidegger’s work throughout those years. But unlike the seminars Faye has unearthed, Heidegger’s writing from that later period is well known; and aside from a few notorious instances, overt Nazi rhetoric simply isn’t there.

In order to bolster his case, then, Faye must resort to some dubious methods. Quoting a memorandum written by Hitler in December 1932, Faye suggests that its language and ideas resemble Heidegger’s. Since “it appears materially impossible that the Führer could have written entirely by himself” all his speeches and memos, Faye goes on, and since “we do not know precisely what Heidegger’s activities were from July 1932 to April 1933” — well, Faye doesn’t quite spell it out, but he is clearly implying that Heidegger was functioning as Hitler’s ghostwriter.

But the weakness of this inference only underscores the problems with Faye’s overall case. What Faye really wants is not to make us think about Heidegger differently, but to excuse us from having to think about him at all, by expelling him from the ranks of the philosophers into the cesspool where Nazi ideologues like Alfred Rosenberg dwell. “In the work of Martin Heidegger,” Faye concludes, “the very principles of philosophy are abolished.”

If this judgment were to become generally accepted, it would have serious consequences for the reputation of Hannah Arendt, whose name is so intimately linked with Heidegger’s. Arendt was not just the elderly Heidegger’s defender; as an 18-year-old student, she had been his lover, and he was a formative influence on her thought as well as her emotional development. It makes sense, then, that in Stranger From Abroad, his readable but unprobing account of their relationship, Daniel Maier-Katkin, a professor of criminology at Florida State University, should effectively minimize Heidegger’s political and philosophical sins. “Heideg­ger’s embrace of the Nazis stands among innumerable other acts of accommodation by leading citizens,” he writes, for whom “optimism and opportunism formed a basis for entente.”

He is led to this judgment in part by his uncritical admiration for Arendt. For if Heidegger was merely an opportunist on an “escapade” — that bizarrely inappropriate word, which Maier-Katkin borrows from Arendt — then Arendt was right to vouch for him in 1969. More, she was justified in resuming their friendship in 1950, after not speaking to Heidegger since the Nazi takeover in 1933, when she was forced to flee the country. “This evening,” she wrote her old teacher after their reunion, was “the confirmation of an entire life.” If she had not reached out to him, she said, she would have committed “the only really inexcusable act of infidelity . . . out of pride, that is, sheer crazy stupidity. Not for reasons.”

This is one of many moments in Maier-Katkin’s book when his subjects deserve to be put under greater pressure than he is willing or able to apply. For the truth is that Heidegger was much more than a “leading citizen” who “accommodated” the Nazi regime; and Arendt had good reasons to apply to him a standard of judgment at least as unforgiving as the one that she notoriously used when finding European Jewish leaders responsible for enabling the Holocaust (in Eichmann in Jerusalem).

Least convincing of all is Maier-­Katkin’s suggestion that Heidegger is to be understood as just a brainier Adolf Eichmann, “motivated less by racial ideology than by careerist opportunities, combined with thoughtlessness about others.” Arendt would be appalled by such a characterization of the man she herself called the “secret king in the empire of thinking.” For what makes Heidegger’s Nazism a challenge — as opposed to merely a scandal — is the fact that he did not drift into evil, but thought his way into it. And once we acknowledge the powerful attraction of his work, we are morally and intellectually bound to explore what part of that attraction is owed to ideas with a potential for evil. Neither Faye nor Maier-Katkin embarks on that more difficult questioning, which asks us to confront not just Heideg­ger but ourselves.

Adam Kirsch is a senior editor at The New Republic and a columnist for Tablet magazine.