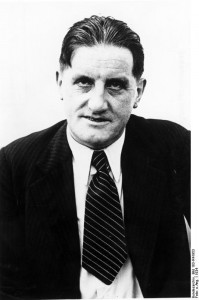 Schicklgruber just laughed when Hanfstaengl sat down at the piano, but when he started to play . . .

. . . Hitler was delighted and Naziism began to take shape. That, at any rate, is the way Ernst ("Putzi") Hanfstaengl tells it. A sometime Harvard student (his grandmother was a New England Sedgwick) and longtime Hitler crony, Putzi* began supporting the Nazi Party in 1922 and labored to make it palatable to Germany's "best people."

With this aim in mind, Putzi excitedly told Adolf about the hypnotic effect of college cheering sections at U.S. football games and, at the piano, demonstrated the "buoyant beat" of U.S. brass bands. Recalls Putzi:

"I had Hitler fairly shouting with enthusiasm. 'That's it, Hanfstaengl, that is what we need for the movement, marvelous,' and he pranced up and down the room like a drum majorette." The "Rah, rah, rah!" refrain of Harvardmen, by Putzi's account, became the thunderous "Sieg Heil! Sieg Heil!" of the Brownshirt demonstrations. Storm Trooper bands blared their goose-step rhythms with a between-halves unison. Such Nazi slogans as Ein Volk, Ein Reich, Ein Führer were patterned on the effective use of catch phrases in U.S. election campaigns. As Hitler's "American expert," Putzi modestly admits: "I suppose I must take my share of the blame."

The Mamma's Boy. An accomplished pianist, art dealer and amateur historian, Hanfstaengl looked down his cultural nose at Hitler. Not only did the man resemble a suburban barber on his day off; he could not tell a Caravaggio from a Michelangelo. Worse, he seldom paid his debts, loved to stuff himself with pastry and whipped cream, sat delightedly through three showings of King Kong. Hitler, says Putzi contemptuously, was a Muttersöhnchen (mamma's boy) whose impotence may have been caused by syphilis and who resented all those who could enjoy normal sexual relations.

Hitler was also a tremendous orator with a droning voice whose hypnotic effect "has never been equaled," and Putzi Hanfstaengl dreamed of becoming the power behind the drone. With a quality of mind that Germans call dummschlau—a combination of cunning and stupidity—he thought he could use the Nazi barbarians to defeat the domestic Communists and Socialists, and then craftily make sure that Hitler's "revolution" would be orderly and beneficial.

20-20 Hindsight. In 1937, a badly-scared Hanfstaengl fled Germany, convinced that the Nazi "wild men" were about to kill him. He spent World War II shuttling between British detention camps and the U.S., now lives in Munich.

Putzi's book, probably his last attempt to capitalize on his career as Naziism's foremost political pianist, often reads like an edition of Munich Confidential. Politically and morally, it has the usual 20-20 hindsight. Its value for future historians will lie mostly in the gossipy anecdotes that show Hitler in his moments of off-platform relaxation—some of them very comic, as when Adolf, after the failure of the beer hall Putsch, threatens to commit suicide, but allows himself to be easily disarmed by Hanfstaengl's pregnant wife.