Related — Barclays and the Oil Market: Agent Provocateur Ultimo: Prince Bandar and the Price of Oil (” … For the past 10 years oil is kept high by Wall Street’s mightiest (we mean Goldman Sachs) and the so-called market maker banks with the fattest fingers in the oil market pie – JP Morgan, Barclays, Deutsche Bank, Societe Generale. …”)

In a Republican field as weak as any in the past 30 years, Bush might have easily mopped the floor with Mitt Romney.

But Jeb had virtually disappeared after he left office in 2007, studiously avoiding the national press. His first order of business was filling his coffers. He signed on as a consultant to Lehman Brothers. After Lehman’s collapse in 2008, he joined Barclays, which led to a lot of golf games with bankers in New York. Along the way, he trimmed down his weight, consulted continuously with donors and political consultants, and prepared himself for … what? …

… Bush’s ties to Barclays point to another potentially prickly issue for him — his support for the 2008 Wall Street bailout known as the Troubled Asset Relief Program, which initially authorized $700 billion in loans from the U.S. government to the banking sector.

From September through December of 2008, Barclays benefitted from $8.5 billion in taxpayer dollars that were used to bail out failing insurance giant AIG, according to a 2009 report in Politico. A spokeswoman for the governor said, however, he didn’t join the firm until March 20, 2009.

But years later, during a 2012 hearing on Capitol Hill, Bush endorsed the bailout.

“For a short-term solution to a problem that had global implication, I think that was probably the right thing to do,” he said.

Other potential presidential contenders are on record supporting TARP, including Rep. Paul Ryan, who voted for it, and Texas Gov. Rick Perry, who signed a letter urging Congress to pass “an economic recovery package,” though he later said the letter wasn’t an explicit endorsement of TARP itself. …

… Soon after Bush announced that he would “actively explore the possibility” of running for president, a Democratic super PAC posted a YouTube video titled “Welcome to the GOP Primary, Jeb!” that included Republican criticism of the former Florida governor. The PAC, American Bridge 21st Century, also referenced Bush’s work with Barclays and Lehman Brothers to argue that Bush will have similar problems relating to his wealth that Romney had in 2012. …

Republicans Look At Jeb Bush … And Shudder In Horror

… Romney, according to Politico, is telling people he’s willing to jump in because the Republican field is so pathetic.

He has said, among other things, that Jeb Bush, the former Florida governor, would run into problems because of his business dealings, his work with the investment banks Lehman Brothers and Barclays, and his private equity investments.

“You saw what they did to me with Bain [Capital],” he has said, referring to the devastating attacks that his Republican rivals and President Barack Obama’s team launched against him for his time in private equity, according to three sources familiar with the line. “What do you think they’ll do to [Bush] over Barclays?” …

The Washington Speakers Bureau has deleted former Florida Gov. Jeb Bush from its website, another sign he is serious about a presidential run.

Dec. 18, 2014
WASHINGTON, Dec. 18 (UPI) — Jeb Bush is reportedly giving up his role as a U.S. adviser to the British banking giant Barclays as well as paid speeches that bring in as much as $65,000.The Wall Street Journal cited a “person familiar with the matter” who said the former Florida governor would leave Barclays PLC by year’s end. The person said Bush has been advising the bank’s clients on economic trends since 2009.

Bush, son of one former president and brother of another, announced earlier this week that he was launching an exploratory committee to examine a run for the Republican presidential nomination in 2016.

After a career that combined banking, real estate and work on his father’s campaigns, Bush served as Florida’s secretary of commerce in the late 1980s. He ran for Florida governor in 1994 and won four years later, becoming the state’s first two-term Republican governor.

The Washington Speakers Bureau deleted Bush from its website this week, Politico reported. The bureau has represented him since he returned to private life in 2007.

Bush reportedly was paid as much as $65,000. Before all mention of him was removed, the bureau said Bush has a “visionary understanding of the issues.” The website also offered a “civilized partisan debate” with Bush on the Republican side and former Sen. Bill Bradley of New Jersey on the Democratic one. 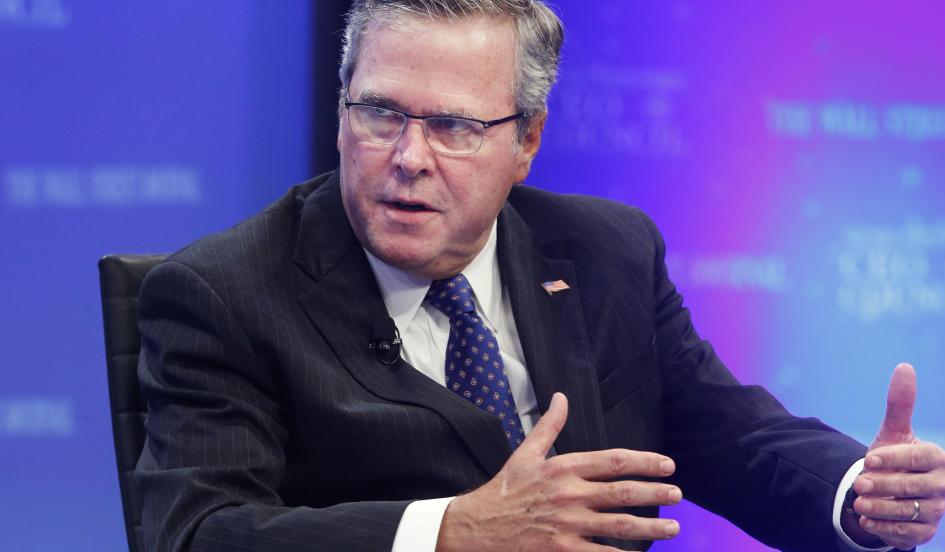