ON NOV. 21, the House Intelligence Committee perpetrated one of the more surreptitious Friday news dump in recent memory: dropping a comprehensive, two-year report that debunked pretty much every myth about the 2012 Benghazi tragedy.

Did the White House send then-UN Ambassador Susan Rice out on Sunday morning talk shows to mislead Americans about the attacks? No, the report said, she was merely stating what were at the time the best assessments of the intelligence community on what happened in Benghazi.Was there an intelligence failure prior to the attacks? No, the deteriorating security situation in Benghazi was well-chronicled, but there was no specific warning about a possible attack.

Was the military prevented from offering support or even worse given a stand-down order by the White House? No, there were not any US military assets able to respond quickly enough.

Were whistleblowers silenced, intimidated, or prevented from testifying before Congress? No.

These sober findings are not only consistent with two years of statements from the White House, the State Department, and the intelligence community, but they stand in stark contrast to the unceasing stream of innuendo and unsupported allegations of wrongdoing that have been irresponsibly alleged ever since four Americans were killed during a terrorist attack on US diplomatic facilities.

The report’s release gives us the opportunity to focus on the real Benghazi scandal: the shameless and irresponsible politicization of this tragedy by the Republican Party. For two years, party graybeards like John McCain accused the Obama administration of engaging in a “cover-up’’ on Benghazi; Speaker of the House John Boehner brazenly asserted that the Obama administration was “misleading the American people;” Senator Lindsey Graham of South Carolina accused the president of having “failed as commander-in-chief before, during, and after the attack;” and House committee chairman Representative Darrell Issa floated unfounded “suspicions” that Hillary Clinton gave a “stand down” order to prevent military resources from being sent to help those under attack.

Then there was the steady stream of conservative pundits who claimed, among other things, that the White House was blackmailing then-CIA Director David Petraeus to keep him quiet about Benghazi. There was the accusation hurled at Hillary Clinton that she faked a concussion to avoid testifying before Congress about the matter and the almost routine assertion that the White House had left those in Benghazi to die. None of it was true.

This is certainly not the first ginned up partisan attack. But the consequences of “Benghazi’’ have been significant.

First there are the costs of more than a dozen public hearings, 50 member and staff briefings, and the turning over of 25,000 pages of documents. According to the Pentagon, “the total cost of compliance with Benghazi-related congressional requests sent to the department and other agencies is estimated to be in the millions of dollars.”

Then there are the larger foreign policy implications — the impact on the State Department’s ability to do its job. In recent years, one of the hallmarks of American diplomacy — and certainly the ethos of Ambassador Chris Stevens, who died in the Benghazi attacks — is expeditionary diplomacy. That means getting US diplomats outside the protection of embassy walls and into the cities, towns, and communities of the countries where they are serving. 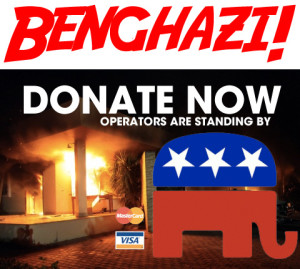 Increasingly, however, it is an abundance of caution that dictates the actions of US diplomats and beyond that a fear that if something goes wrong, State Department officials may find themselves appearing before a congressional committee, with their careers hanging in the balance. This is having a practical impact in conflict-torn countries like the Central African Republic or South Sudan, where embassies were closed in part because of the Benghazi effect.

As the Benghazi incident lamentably demonstrates, caution is not necessarily a bad thing. But the GOP’s Benghazi freak-out risks placing one more hurdle in the way of US diplomats intent on getting into the field. After all, why take a chance — especially in countries that are not necessarily in the top tier of US national security interests — when the political and personal downside could be so significant?

Beyond the lies and misinformation peddled to the American people, this is one of the tangible impacts of Benghazi and it is one for which an accountability moment is desperately needed. In pursuit of narrow political gain, Republicans cravenly manufactured a non-existent “scandal” that not only unfairly slandered the White House but now risks stifling the expeditionary impulses of US diplomats.

They owe the American people an apology.