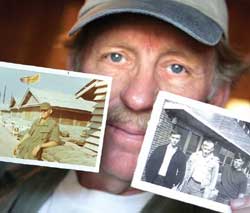 Frank Rochelle holds two pictures of himself at his Onslow County home, one from 1968 on the right, he is in the center with unidentified soldiers at the barracks while at Edgewood Arsenal, Maryland at age 20. The picture on the left shows him in 1969 in Oui-nhon, Vietnam at age 21. Rochelle is the leader of a handful of veterans who are suing the DoD for testing drugs on them while they were in the military. (photo: Don Bryan / The Daily News)

“I started seeing animals coming out of walls. People were constantly calling my name, and I’d turn around, and there was no one there.”

A Jacksonville resident who is suing the Department of Defense for using experimental drugs on him during the Vietnam war is one step closer to having his case heard.

In late January, a lawsuit filed by six military veterans, Vietnam Veterans of America, and the organization Swords to Plowshares against the Department of Defense, Central Intelligence Agency, and U.S. Army overcame a number of motions to dismiss and won the right to continue with the legal process. The plaintiffs, all of whom were part of government experiments at the Edgewood Arsenal in Edgewood, Md., and other locations between 1950 and 1976, hope to win healthcare for physical damages sustained during that period and freedom from oaths of secrecy that they took about the project.

Jacksonville native Frank Rochelle was 20 in 1968 when he was drafted into the Army. Stationed at Fort Lee, Va., he said he volunteered for a temporary duty assignment in which soldiers were told they would be testing various Army equipment, such as gas masks and boots. Of about 400 applicants for the assignment, Rochelle said he was one of about a dozen chosen, selected for high scores in physical and mental aptitude.

After signing a waiver of confidentiality, Rochelle learned about another task: taking different drugs and allowing the effects to be recorded. But, he said, he was told that he wouldn’t be harmed or be given anything that hadn’t been previously administered to other soldiers. The second drug Rochelle tested, administered through a breathing apparatus, was atropine, an anticholinergic drug with hallucinogenic properties.

The effects were immediate.

“I started seeing animals coming out of walls,” Rochelle said. “People were constantly calling my name, and I’d turn around, and there was no one there.”

Although ostensibly under constant observation, Rochelle found a razor while under the drug’s effects and tried to gouge his skin, believing his freckles had turned into living bugs and he needed to cut them out. The hallucinations, he said, lasted two-and-a-half days.

When Rochelle got out of the Army in 1970, he said he had trouble holding a job due to complexes he had developed including authority problems and claustrophobia, Other symptoms that he believes followed him from Edgewood include memory loss, anxiety disorders, breathing disorders and heart problems.

After retirement from a maintenance job at Camp Lejeune in 2009, Rochelle began searching the Internet for others with stories like his. He found nearly 35 veterans on the search that also led him to Gordon Erspamer, senior counsel at the law firm Morrison & Foerster, which agreed to take his case on pro bono.

Erspamer said the law suit, filed in July, has passed its first large hurdle in overcoming motions to dismiss.

Of the 7,200 GIs who participated in drug testing at Edgewood or other facilities, Rochelle estimates 3,500 to 4,000 remain, which gives his quest a note of urgency.

“The government, in my opinion, has been waiting for us to die off,” he said.

The lawsuit still faces a number of obstacles, including document requests, interrogatories, and subpoenas. Erspamer is working in the first quarter of the year to get the veterans certified as a class. But he believes that, ultimately, the suit will be successful.

“The strength of cases more often than not depends on the facts,” Erspamer said. “And the facts of this case are so compelling.”

Officials with DoD and CIA have told media they do not comment on pending litigation.