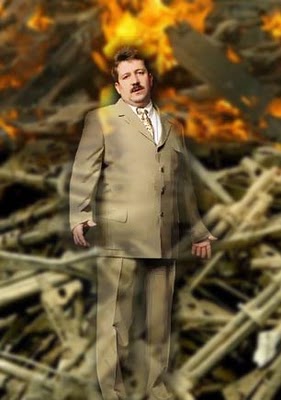 Federal prosecutors in New York unsealed an indictment against Bout for allegedly conspiring to sell millions of dollars worth of weapons to the Colombian insurgent group the FARC, which the U.S. has designated as a foreign terrorist organization. The prosecutors allege that the weapons were to “be used to kill Americans in Colombia.”

Thai authorities arrested Bout last month, based on a complaint filed in the U.S. District Court in New York charging conspiracy to provide material support to a designated foreign terrorist organization. According to the indictment unsealed today, Bout “has carried out his weapons-trafficking business by assembling a fleet of cargo airplanes capable of transporting weapons and military equipment to various parts of the world, including Africa, South America and the Middle East.”

The indictment adds that between November 2007 and March 2008, Bout “agreed to sell to the FARC millions of dollars’ worth of weapons – including surface-to-air missile systems ("SAMs"), armor piercing rocket launchers, AK-47 firearms, millions of rounds of ammunition, Russian spare parts for rifles, anti-personnel land mines, C-4 plastic explosives, night-vision equipment, “ultralight” airplanes that could be outfitted with grenade launchers and missiles, and unmanned aerial vehicles.”

Prosecutors allege that Bout “agreed to sell the weapons to two confidential sources working with the DEA, who represented that they were acquiring these weapons for the FARC, with the specific understanding that the weapons were to be used to attack United States helicopters in Colombia.”

As described in the indictment, during a covertly recorded meeting in Thailand on March 6, 2008, Bout stated to an undercover operative that he could arrange to airdrop the arms to the FARC in Colombia, and offered to sell two cargo planes to the FARC that could be used for arms deliveries. Bout also provided a map of South America, and asked the operative to show him American radar locations in Colombia, DOJ said.

If convicted, Bout faces a maximum sentence of life imprisonment. The United States is actively pursuing his extradition from Thailand.

"Viktor Bout has long been considered by the international community as one of the world's most prolific arms traffickers," said U.S. Attorney Michael Garcia. "Viktor Bout no doubt faces some of the most extraordinarily serious conspiracy charges possible for his crimes against Americans," said DEA Acting Administrator Michele Leonhart.