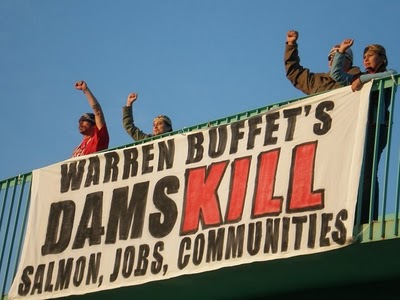 This is my report on the trip to Warren Buffett’s Berkshire Hathaway meeting in Omaha that I made with members of Klamath River Indian Tribes, commercial fishing groups and conservation organizations from May 1-4. The group, stepping up their protest tactics from last year’s meeting, delivered a clear message on the urgent need to remove Klamath River dams to Buffett, the shareholders, the media and the public.

The group is demanding the removal of four Klamath River dams owned by Buffett subsidiary Mid American Energy, contending that they kill salmon and create massive blooms of toxic algae. Dam removal advocates stepped up to the microphone to deliver their message to Buffett, the world’s second richest man, in a packed convention center including Bill Gates, the world’s richest man, and a crowd of 31,000 shareholders.

Although Buffett rebuffed dam removal advocates just like he did when they attended last year’s meeting, this year’s actions made the Klamath River the largest single issue addressed at the meeting. With their in-your-face actions and tactics, the group made shareholders, the media and the public aware of Buffett’s role in maintaining fish-killing dams on the Klamath – and vowed to keep disrupting Buffett’s meetings until he signs an agreement to remove the dams.

The protest of Buffett’s meeting came in the wake of the declaration of a commercial fishery failure by U.S. Secretary of Commerce Carlos M. Gutierrez on May 1. This year, for the first time in history, commercial and recreational fishing in California and Oregon has been closed by state and federal regulations.

Although the immediate cause of the fishery failure this year was the unprecedented collapse of Central Valley chinook salmon, just two years ago salmon fishing was severely restricted because of the decline of Klamath River chinook salmon spurred by the fish kills of 2002.

Tribal members, commercial and recreational fishermen impacted by this year’s fishery closures and Regina Chichizola of the Klamath Riverkeeper camped out in front of Omaha’s Qwest Center at 1 a.m. in a cold, windy rain typical of spring in the Midwest. This allowed the group to get at the head of the cue to ask Buffett questions during a six-hour question and answer session.

Chook-Chook Hillman, a 23-year-old Karuk World Renewal Priest (Fatawan), spearheaded the strategy and was the third person to speak at the meeting. After introducing himself in the Karuk language, he challenged Buffett by saying, “as a European-American you are the visitor in our country…will you not meet with the native people impacted by your fish killing dams.”

“You say you want to address poverty and disease in the Third World,” Hillman said. “But you are creating those same Third World conditions right here in America. We want to meet and resolve the issue in a way that saves you money and saves our culture!” Chook-Chook then presented a dam removal agreement for Buffett to sign.

As he spoke, Georgiana Myers and Annalia Norris of the Yurok Tribe unfurled a large banner that read “Klamath Dams Equal Cultural Genocide.”

Buffett responded, “I’m prohibited from speaking out by an agreement that we signed with FERC. However, there is strong disagreement in your area about this issue.”

He then referred the question to Mid American CEO David Sokol who echoed that “it would be inappropriate for Buffett to comment on Klamath relicensing.”

“We would be pleased to ahead with a solution when the 28 parties agree on a solution,” Sokol said, claiming that the dam relicensing process is complex. “If public policy moves in the direction of the removal of dams, fish ladders, or the status quo, then that would be where we go. It is a complicated situation where a cooperative solution is needed.”

Before lunch the group asked two more questions. Klamath Riverkeeper Regina Chichizola focused on the toxic algae blooms in Buffett’s Klamath reservoirs, while Mike Polmateer of the Karuk Tribe brought up the 2002 fish kill and algae pollution on the river.

Like he had done with Hillman’s question, Buffett each time briefly commented on the questions and then passed it off to Mid American CEO David Sokol. And each time another banner was unfurled.

One read, “Buffett’s Dams kill salmon, communities, and jobs, while another read “Warren: Un-dam the Klamath – sign the agreement now!” Although security escorted the Tribal members from the building, there were no arrests.

“FERC will rule on the dam relicensing issue and will listen to 28 others and you,” replied Buffett to Chichizola. “We will do what they say and will follow the dictates set by FERC. We are neutral in this.”

Sokol acknowledged the existence of the toxic algae, but dismissed the role of the dams in creating the algae and blamed the high nutrient load in the river on Klamath Basin agriculture.

“Upper Klamath Lake is hyper eutrophic,” Sokol said. “Those nutrients that cause the algae flow down into the river form the upper basin.”

“We aren’t polluting the river,” emphasized Sokol. “We aren’t adding anything to the river when it comes out of Oregon. The water goes through our pen stocks and then comes out at your end.”

However, Chichizola noted that this toxic blue green algae isn’t found anywhere in the upper basin, only in PacifiCorp’s reservoirs and river below the dams. “The science demonstrates that toxic algae blooms are created in Buffett’s reservoirs when the water is warm and stagnant during the summer,” said Chichizola.

After the lunch break, Buffett, clearly upset about the questions asked him, said that he would not field any more questions about the Klamath. Commercial salmon fishermen Dave Bitts, Karuk fisherman Ron Reed, and Karuk Medicine Woman Cathy McCovey were denied access to the microphones despite being next in the cue to speak.

Bitts, who had to navigate around a snowstorm in Denver to make the meeting, was clearly disappointed and angry.

“I traveled over 3000 miles to be here and woke up at two o’clock in the morning to speak – then I was told I couldn’t speak,” said Bitts. “The story I have to tell is that of an out of work commercial fishermen. Buffett spent a lot of time today explaining what he couldn’t do for us. I wanted to ask the richest man on the planet what he could do for us.”

Yurok Tribal Council member Richard Myers said, “Everyone has had a chance to sit at the table and work with the tribes towards a resolution. There is one empty chair left. We are waiting for PacifiCorp to take a seat.”

Outside the meeting, members of the Chippewa, Omaha, Lakota Sioux, Rosebud Sioux, Cheyenne and other Indian Tribes stood in solidarity with members of the Klamath River Tribes and fishermen, holding banners and signs demanding that Warren Buffett agree to dam removal.

Barbara Beauvasi, a Rosebud Sioux member from Omaha, Nebraska, responded to Bufffett’s claims that dam removal was a complex issue and that his hands were “tied” in resolving the Klamath dams problem. “The solution is simple – dam removal – and Warren Buffett has the power to do it,” she said.

During the meeting, Berkshire Hathaway security detained Karuk Vice Chair Leaf Hillman for 10 minutes. “They can arrest me if they want, but if they do, there are 4,000 other Karuk ready to fill my shoes,” said Hillman.

On the night before, a group of women from the Klamath River Basin Tribes, dressed in traditional jewelry and regalia, staged a protest over the fish-killing dams during a cocktail party at Buffett’s local diamond retail store Borsheims.

The group unfurled a huge banner demanding, “Warren, Un-Dam the Klamath! Sign the Agreement Now!” They also passed out leaflets to the shareholders as they walked into and out of the event.

“Wealthy women come here to shop for their jewelry,” said Yurok Tribal member Georgiana Myers. “Wealthy women from the Klamath River make our jewelry from the plants that grow along the river banks and the shells of mussel and abalone. Now the river is so polluted from Buffett’s dams we are worried about harvesting the plants we need for our jewelry and regalia.”

“The first of the PacifiCorp dams was built on the river in 1916,” said Hillman. “This stopped the migration of salmon to the upper basin that the Klamath Tribes depended upon for thousands of years. PacifiCorp told their first lie – that they would provide access over the dam to migratory fish – when they applied for their first license. Since that time, the company has constantly acted in bad faith.”

After the group returned home to northern California, tribal members and fishermen declared the trip as a “mission accomplished.”

“Now we return home having accomplished our mission,” said Karuk Tribal Member Jess Mcloughlin who was involved in erecting the banners. “We sent a clear message to Buffett, Sokol and every other executive involved that as long as there is no justice on the Klamath, there will be no peace for them.”

One distinct difference between this year’s and last’s years protests was the increasing awareness by the shareholders of the Klamath River dams issue. A number of shareholders expressed support for dam removal advocates.

“I want to thank the people who spoke at the meeting for educating the shareholders about the problems with the Klamath River dams,” said Joan Mersch, a shareholder from Menlo Park, California. “I think more people need to be educated about this issue. I appreciate what you’re doing.”

The group vows to disrupt Berkshire-Hathaway meetings around the country until Buffett agrees to remove the Klamath dams. “We came here last year and we will keep coming back to Omaha every year until Buffett signs a dam removal agreement,” concluded Molli White, a Karuk Tribal member from Orleans, CA. 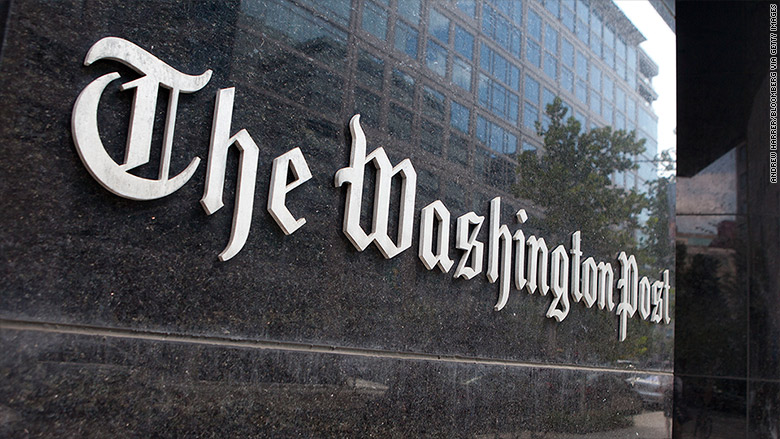