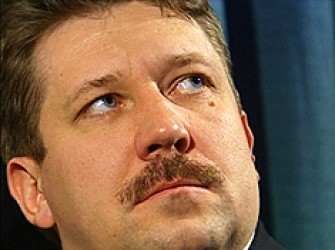 3. Where did Bout’s supply operations have an especially big impact in fanning the flames of war?

Africa is the most heartbreaking landscape where his weapons have had a terribly devastating effect. My co-author, Doug Farah, witnessed some of the results firsthand: Villagers forced into a horrific life of slavery mining blood diamonds, goaded by troops wielding huge arsenals of AK-47s and ammo that streamed in from armories in the Eastern bloc. Child soldiers stoked on gin and amphetamines, carrying around guns as long as they were tall. It’s hard to trace specific shipments to the point where you can definitively say his guns provided the tipping point in one massacre or battle. But the wealth of evidence that UN and other investigators amassed over the years point to some pretty damning conclusions. In Liberia, he was the chief supplier to Charles Taylor, the deposed president-for-life who’s now on trial for war crimes.

4. Black market arms dealers typically rely on some support from governments and intelligence agencies. Who were his major governmental sponsors and what sort of help did they offer him?

Bout’s most critical government sponsors have been the Russian military and intelligence apparatus. He got his start in the military language academy in Moscow, a well-known stepping-stone to a Russian intelligence career. We were told that Bout bought some his first planes in the early 1990s with help from friends in military intelligence, and that they kept an early stake in his business. The details of that relationship remain murky all these years later, but there are clear glimmers showing how Bout continues to be provided krisha, which is Russian criminal slang for protection. A few days after Belgium and Interpol sought Bout’s arrest on money-laundering charges in 2002, the Russian government publicly insisted they had no idea where Bout was. Even as the Foreign Ministry put the announcement out, Bout was sitting in a radio station in Moscow, loudly proclaiming his innocence over the air. The Russians essentially neutralized the Belgian investigation by refusing to turn him over. For other governments, like ours, there were more strategic reasons to do business with Bout. When the Defense Department set up its giant airlift into Iraq after the success of the 2003 invasion, they looked for firms that could fly cheaply into Baghdad under harsh conditions. It wouldn’t have been too hard to figure out that Bout was persona non grata—there was plenty of open-source information on his background. But the mindset at the Pentagon was get it done, now. What was incredible was that even after his work for DOD was exposed by the press in late 2004, the Pentagon continued using Bout’s planes, and even forced the Treasury Department to hold off on a plan to freeze Bout’s assets.

5. Despite winning American contracts, there were some U.S. officials who tried to shut down Bout. Can you sketch out in a more detail his relationship with the American government?

The U.S. was slow off the mark in learning about Bout’s activities. The “Blackhawk Down” debacle in Mogadishu in 1993, when U.S. peacekeepers were overrun and gunned down by rebels, and the Rwanda disaster in 1994 left the Clinton administration shell-shocked in Africa. Intel assets shrunk there as Bout’s profile grew. But by 2000, a core group of Clinton national security and intelligence officials had finally grown concerned about violence spiraling out of control in Angola and Sierra Leone. They homed in on Bout, not only because of the arms he delivered but also for the larger threat he posed as a rogue transnational logistics arm for terrorists or any high bidder. The British, UN officials and a few dedicated anti-arms trafficking activists also played key roles in exposing Bout’s arms flights. They were mostly focused on Africa, but there were already hints of Bout’s work with the Taliban and they even discovered Bout network cells operating in Texas and Florida. They began trying to work with Belgium and South Africa to develop a criminal case against Bout, but time ran out. When the Bush Administration came in, they gave the Bout hunters a few more months, but that was all swept away by the September 11 attacks. We now know that one of Bout’s pals approached an American intelligence agent soon after the attacks, suggesting that the U.S. use his operation in arming the Northern Alliance against the Taliban and Al Qaeda. We don’t know for sure if the U.S. accepted, but European intelligence officials believe a relationship blossomed. Within two years, Bout was flying for us not only in Iraq, but also in Afghanistan. The U.S. military insisted they had no responsibility for Bout’s hiring, because, as Paul Wolfowitz said, he was a “second-tier contractor”–in other words, hired by, say, KBR or FedEx, not directly by the Army or the Marines. But there were other reports of direct contracts. DOD made no effort to put Bout on a no-fly list early on, and made only perfunctory follow-up efforts to find out the backgrounds of the companies flying for them.

Just last week, the Times of London reported on a sting operation linking a Bout surrogate to efforts to arm Somali militants. There have also been reports that he was sighted by Western intelligence in Beirut around the time that Hezbollah forces in southern Lebanon, equipped with modernized Russian armaments, faced off against the Israeli army. And it appears his organization is even buying equipment from the U.S. Last fall, federal firearms agents learned that a Bout firm in Bulgaria had sent money to a Pennsylvania sporting goods store to buy night vision scopes and other paramilitary items. Interestingly, the equipment was sent to a Russian firm that the ATF described as a front for the FSB, the Russian intelligence agency that replaced the KGB. It’s a small world.