NEW YORK A woman who allegedly threatened the Times Herald of Port Huron, Mich., saying she would take a gun to the newspaper and “do what they did at Fort Hood,” is being investigated, the paper reports.

The Gannett daily’s Web site stated that a call came into a Gannett customer service center in Louisville, Ky., from a 60-year-old unidentified woman last Thursday.

“She was upset about an editorial in Thursday’s paper,” the Web site reported, adding, “The editorial criticized U.S. Rep. Candice Miller, R-Harrison Township, for participating in a Nov. 5 Capitol rally. Police said the call was made about 11:40 a.m. Thursday.” No charges have been filed in the investigation, the story said.

Earlier, the paper reported as follows:
*
The police department was provided a recording of the conversation, which happened about 11:40 a.m. An officer went to woman’s home and took a statement, Baker said. He declined to say if the woman acknowledged making the threat. 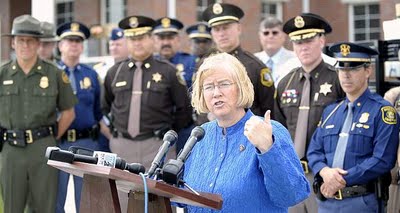 The editorial that sparked the threat criticized U.S. Rep. Candice Miller, R-Harrison Township, for continuing to participate in a Nov. 5 Capitol rally after it turned nasty. The rally was organized by Rep. Michele Bachmann to speak out against the government’s proposed health care legislation.

“Rally participants carried a variety of disturbing signs. One placard had a health care message superimposed over dead bodies from Holocaust concentration camps. One referred to President Barack Obama as ‘Sambo.’ One depicted the president as the evil ‘Joker’ from Batman movies. One referred to ‘Obama and his Marxist buddies,'” the Times Herald‘s editorial board wrote. “If Miller truly has signed up with the right-wing fringe – the bigots, the hate-mongers and the Nazi chanters – all of us in the Blue Water Area might well need to take another look.”

Paying Off The Warlords
Nov 18