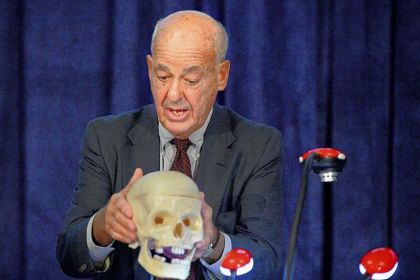 Photo: Cyril H. Wecht uses a skull to discuss the  assassination of President John F. Kennedy at a symposium Thursday.

A surgeon who half a century ago was among the doctors who tried to save  President John F. Kennedy’s life said Thursday that the Warren Commission got it wrong in determining a lone gunman assassinated JFK in Dallas on Nov. 22,  1963.

Speaking via teleconference to a Duquesne University symposium marking the  50th anniversary of the assassination, Robert N. McClelland said he was the  first doctor in Parkland Hospital’s Trauma Room One to notice the massive wound  in the back of Kennedy’s skull and that a trauma of that size had to be an exit  wound.

“The whole right side of his skull was gone. I could look inside his skull  cavity. Obviously, it was a mortal wound,” he told a spellbound audience of  legal, medical, forensic and investigative experts and the public who packed the  university’s Power Ballroom.

Dr. McClelland, now 83 and professor emeritus at the University of Texas  Southwestern Medical Center, said that because it was an exit wound, it  logically followed that it had been fired from in front of the president’s  limousine. And, in turn, that meant a second gunman was involved in the  assassination, contradicting the Warren Commission’s finding that there was but  one assassin.

The Warren Commission determined that Lee Harvey Oswald acted alone when he  fired three times with a high-powered rifle on the president’s motorcade in  Dealey Plaza from the sixth floor of the Texas School Book Depository. The  commission said that one bullet missed, another went through the president’s  neck and also wounded Texas Gov. John Connolly — the so-called “single bullet  theory” — and the third caused the fatal head wound.

But Dr. McClelland was resolute. “Having seen what I saw” in the emergency  room and then viewing the Zapruder film of the assassination, he said, he  believes JFK “was initially hit from a bullet fired from the sixth floor that  went through his back and out through his neck. The next injury was caused by  somebody behind the picket fence on the grassy knoll firing a shot that blew out  the right side of his head.”

Speaking on the first day of the three-day symposium sponsored by the  university’s Cyril H. Wecht Institute of Forensic Science and Law, Dr.  McClelland also recounted how two days after Kennedy’s assassination he and  other surgeons tried in vain to save Oswald’s life after he was shot by Jack  Ruby while being transferred from Dallas police headquarters to the county  jail.

In his address, Dr. Wecht, the renowned forensic pathologist and longtime  critic of the Warren Report, railed against what he called was the “inept,  inexplicable, totally incompetent” autopsy performed on the president by Navy  pathologists James J. Humes and J. Thornton Boswell. They concluded the  president had been struck by two bullets, fired from above and behind, with the  fatal shot being the one that struck his head.

“They had never done a single gunshot wound autopsy before. If you heard of  this in another country, you’d say condescendingly and dismissively, ‘What do  you expect from that country?’ but this was our country,” Dr. Wecht said. “This  should bother you so much; this should be so distressing, even 50 years  later.”

Dr. Wecht, who used a skull and dissected a brain during his address to  illustrate his criticism of the autopsy and what wasn’t done, said the “cold  case” needs to be reopened.

“The Warren Commission Report is scientifically absurd,” he said. The burden  of the report’s detractors is not to have all the answers about the  assassination, he said, but to point out defects in the investigation, which  they have done. He received a standing ovation.

Among the speakers today will be Academy Award-winning filmmaker Oliver  Stone, director of the controversial 1991 film “JFK” and director/narrator of  the Showtime docu-series “Oliver Stone’s Untold History of the United  States.”