" ... [James] Tague was standing in Dallas's Dealey Plaza, and was struck on the right cheek by fragments from a ricocheting bullet meant for Kennedy. ... 'It was a government take over, a coup,' says Tague. ... The public loved Kennedy. The Washington insiders hated his guts.' ... " 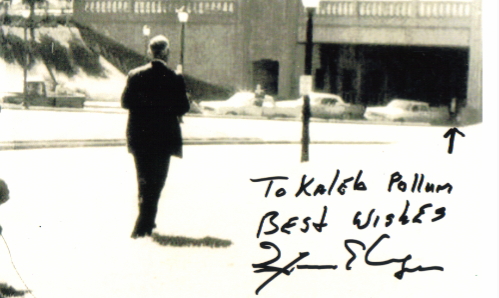 Photo, signed for a fan, shows Tague standing beneath the underpass near the grassy knoll minutes before the bullets fired

November 22, 1963 ... James Tague remembers the day better than most. At the moment of the shooting, Tague was standing in Dallas's Dealey Plaza, and was struck on the right cheek by fragments from a ricocheting bullet meant for Kennedy. Tague suffered only a superficial wound that day, but in a way, the injury is still fresh, 47 years later.  ...

The JFK assassination is still part of Tague's daily life, in part because he runs a store on eBay that's stocked with hundreds of books about Kennedy's killing.

"It started out as a hobby and turned into a little ol' business," says Tague in his honey-thick Texas drawl. "What happened is when I wrote Truth Withheld (his 2003 book about the Kennedy assassination), a couple months later someone says, 'You know, your book's bringing $60 on eBay. And I said, 'What's eBay?'"

As soon as Tague figured out the online auction business, he started doing a brisk trade in JFK assassination books, some drawn from his vast personal collection. The store features ... The Killing of a President by Robert J. Groden, which contains shocking autopsy photos of JFK, the original 1964 Warren Commission Report, the director's cut of Oliver Stone's film JFK, and Tague's own Truth Withheld, signed by the author. Tague's eBay store is, if nothing else, a testament to the remarkable life of JFK's death.

"The main thing is keeping those books available to the younger generation," Tague says. "What fascinates me is that not a day goes by that I don't get one or two requests for autographs. I hit a record about three months ago with 19 requests in one day. It's usually young kids, high school or college age. It blows my mind."

Tague says it was "a pure accident" that he was close enough to JFK in Dealey Plaza to be hit by a bullet meant for the president. On that November day, Tague was only vaguely aware that Kennedy was visiting Dallas, and had no interest in viewing the motorcade. He had a noon luncheon date in downtown Dallas with the woman who would later become his wife and was running late. Just before 12:30, he hurriedly pulled off of Stemmons Freeway onto Commerce Street, driving under a triple underpass. Just as he emerged from the underpass, there was a line of cars stopped directly in front of him. Tague put his vehicle into park, walked out of the car and stepped into history.

"I first thought it was an automobile accident," says Tague. "So I got out of my car and walked three or four steps and I looked up and saw a car coming towards me with two flags on each fender. And I remembered at that point that the president was in town and this was evidently his motorcade."

Just then, Tague heard a pop--what sounded like a loud firecracker exploding--followed a few seconds later by two sharp cracks. Tague felt something sting him on the right cheek. Seeing the crowd begin to scatter, Tague ducked behind a concrete abutment under the triple underpass and saw Kennedy's car blur by as it picked up speed headed for Parkland Hospital. After the presidential limousine passed, Tague scurried over to the sidewalk near the now-infamous grassy knoll.

"I got there just in time to hear a man sobbing, 'His head exploded, his head exploded,'" recalls Tague. "And the policeman asked, 'Whose head?' And the man said, 'The president's.'"

Tague told Dallas Deputy Sheriff Buddy Walthers, who was standing nearby, that something had stung him during the shooting, and Walthers noticed that Tague had two or three drops of blood on his right cheek. When Tague showed Walthers exactly where he was standing at the time of the shooting, the deputy sheriff saw that a curb about 15 feet away bore what seemed like a fresh mark. Walthers surmised that Tague had been hit by a spray of concrete kicked up by a bullet fired at the president.

The chipped curb would soon become part of assassination lore, along with the "mysterious" deaths of eyewitnesses, the "altered" autopsy photographs, the "planted" stretcher bullet, Lee Harvey Oswald's "double," and the "missing" brain of JFK. In August 1964, the FBI cut out a section of the curb for analysis. Later, conspiracy theorists (including Tague) would contend that someone--probably the FBI--patched the curb in order to hide the mark and cover up possible evidence of multiple shooters.

Eight months after the assassination, Tague testified before Wesley Leibeler, assistant counsel to the Warren Commission, about what he had seen and heard in Dealey Plaza on November 22nd. Tague was asked, "Do you think that it is consistent with what you heard and saw that day, that the shots could have come from the sixth floor of the Texas School Book Depository [where Oswald worked]?" He responded, "Yes." But at another point, Tague admitted that it was difficult to separate what had actually happened from what he had heard and read about the assassination.

"There are lots of things that you recall about something like that, that you don't recall for certain," Tague testified.

When the Warren Commission report was published in September 1964, it included Tague's story, along with details about the chipped curb. If the FBI had been trying to cover up the chip, it hadn't done a very good job. The Commission concluded that the assassin had fired three shots: one that wounded both JFK and Texas governor John Connolly, one that shattered Kennedy's head, and a third that missed and probably chipped the curb, resulting in Tague's cheek wound. The fact that the curb was chipped was not inconsistent with there being a single shooter.

At first, Tague was impressed by the Commission's seemingly wide-ranging investigation, and more or less agreed with its conclusion that Lee Harvey Oswald acted alone in shooting the president. But before long, as questions were raised and a steady parade of researchers cut a path to his door, Tague began to have doubts about the official government version. 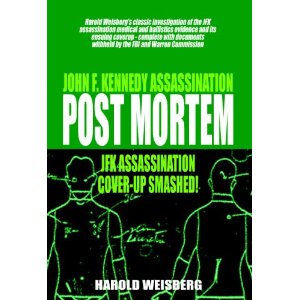 Tague ended up befriending Harold Weisberg, one of the assassination's most obsessed researchers. Weisberg, who died in 2002, was the author of 10 published and roughly 35 unpublished books on the murders of both JFK and Martin Luther King. Weisberg turned his Maryland home into an assassination research center, storing more than 250,000 government papers on the JFK killing in his basement and opening up the collection to other researchers. (The collection is now held by Hood College and can be viewed online at http://jfk.hood.edu/index.shtml?home.shtml.) Weisberg paid the price for his obsession, struggling with financial difficulties for the last three decades of his life.

Tague managed to avoid being consumed by the Kennedy assassination--at least at first.

"I didn't allow any of it to affect my life," says Tague. "I had a family, I had a career, and that came first in my life. And it stayed that way for years."

But gradually, JFK's death began to take over more of his life, as it had for so many people. After Tague retired seven years ago, the Kennedy assassination became more or less a full-time job. ....

Over the years, Tague has become progressively more certain that he's cracked the 20th century's greatest murder mystery. In Tague's book, he wrote, "We will never know the full truth about the assassination of President John F. Kennedy." But today, he harbors few doubts. In fact, he's working on a new book that he predicts will blow the lid off the Kennedy assassination once and for all.

"The new book is naming names about what really happened," says Tague. "It answers all the questions people have asked for years. Through the years, different authors have touched on it, but no one's put it in complete book form. I've got it now. I know I have all the answers and I've got the documentation to back it up."

Tague won't go into details, but the basic premise of his conspiracy theory is similar to Oliver Stone's overheated scenario in the movie JFK.

"It was a government take over, a coup," says Tague. "You have to understand one basic fact and it all becomes clear. The public loved Kennedy. The Washington insiders hated his guts. The exact people who killed him, I don't know. But I know they wanted someone in there they could control--named [Lyndon] Johnson. Johnson was too busy being vice president to do it himself. But he knew it was coming down and he knew it was going to be done for him."

The assassination of JFK changed the course of history in ways we'll never know and still affects the lives of a surprising number of people. Kennedy's murder has become a canvas upon which people have painted their darkest fears--about government secrets, the nature of truth, and the loss of innocence. James Tague wandered into the assassination by accident, but in the end, couldn't escape its ferocious grip.