As News Hounds Ellen (here , here and here) and Media Matters (here and here) have pointed out, Fox “News” is doing quite the unfair and unbalanced coverage of former DOJ Attorney and GOP activist J. Christian Adams unsubstantiated allegations that the Obama Department of Justice has given its stamp of approval to voter intimidation by ordering him to drop charges against the New Black Panthers. Yup, J. former DOJ attorney Christian Adams is whining about alleged black on white racism in the DOJ and being provided lots of air time on Fox to do this. Of course “fair and balanced” Fox doesn’t provide its audience with information on how Adams was hired, during the Bush administration by Bradley Schlozman, who was found to have violated civil service rules (even bragging about it) by making fealty to right wing positions as the main criteria for being hired. Adams is a Fox kind of guy. His view, that Obama is like appeasers who caused “carnage” in WWII isn't all that far off from Glen Beck’s. His view of the Obama administration showing alleged favoritism towards blacks is quite consistent with Beck’s accusation that Obama has a “deep seated hatred of white people.” So it’s not suprising that this right wing zealot is getting validation on Fox which, as evidenced by its treatement of ACORN, does seem to have a problem with minorities advocating for their communities while rich, Christian, white, conservatives who advocate for their “community" are seen as the “real Americans” – unlike Obama and Eric Holder who, in Fox bizarro world, are racists. Enter – stage right – Fox & Friends Steve Doocy and another right wing hack to reinforce the agitprop. 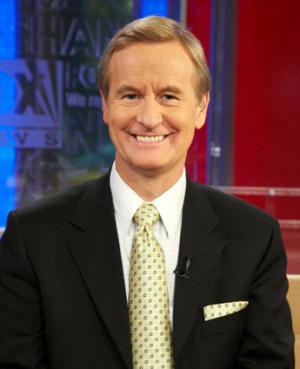 This morning, former weather guy Steve Doocy reported that Adams will be testifying today and referenced Adams allegation that he was forced to drop the voter intimidation charges against the New Black Panthers. Doocy then asserted that Fox has been covering this from day one while “other” evil, librul “media outlets have ignored it.” To discuss the “lack of coverage” was Doocy’s guest, Dan Gainor, who is one of Brent Bozell’s boys at the right wing “Media Research Center.”

Naturally, Doocy didn’t reveal the political orientation of the MRC. Steve excitedly said that Fox ran the clip of the scary black dudes who “had nightsticks” and “were to some people” (“Some People” – LOL – how Foxian!) "threatening people coming in to vote.” Doocy, in his high pitched whiny voice, asked “how come hardly anybody has covered this story except Fox News and some people on the internet?” (Of course, we don’t know that for a fact – but if Fox says it, it must be true, right?) Gainor said that “this is how the old school media loses all their credibility” and then proceeded to demonstrate what a right wing hack he is by promoting Adams’ propaganda that “this is one of the most obvious and simplest violations of federal law that he encountered in his career. He left Justice because he didn’t find justice there.” He added that the media loved Bush administration whistleblowers and “now that a whistleblower is going after the Obama administration for voter intimidation. He blithered about how the networks and the NY Times and the WAPO aren’t covering the Obama administration “as it needs to be covered.” But wait, Fox hasn't reported on how the Bush administration didn't pursue voter intimidation charges against the Minutemen. Is this a double standard? Hmmm...

Doocy validated the propaganda by saying that Adams “was so fed up with what happened he quit.” The agitprop chyron was sure to get the juice of white outrage with its reference to Adam’s accusation that the charges were dropped “for racial reasons.” More propaganda reinforcement occurred when Doocy played (ready for it) a clip of Adams’ interview with Megyn Kelly during which he claimed that “testimony” showed that he was forced to drop the case. For the second time, the visual of one of the Black Panthers was shown. (ya scared yet?) After the clip, Doocy said “oh, man.” Agitprop Cavuto marked chyron: “Media Bias? MRC: New Black Panther Party Coverage Lacking.” Doocy delivered the message for the day with which he delivered with gusto: “We always go back to this, Dan Gainor, that is had something like this happened during the Bush years or with any Republican in office, this would be in type that big on the front page of the page of the New York Times.” Gainor said that “this was the entire pattern of the Obama administration media coverage.” He accused the media of trying to protect Obama by “minimizing” Van Jones (don’t worry Dan, Glenn Beck took good care of that non issue) and the Gulf crisis. Doocy provided the second message of the day with “the other problem is Eric Holder still has not explained why they dropped the case.”

Comment: Word to Steve and Dan – This totally partisan piece of right wing Fox and MRC propaganda, which further reinforced other Fox and MRC propaganda, is how the right wing media “loses all their credibility.” And if you’re talking about Fox, they never had any to begin with. Oh, and word to Steve. The Obama administration issued a detailed report on why the case was dropped. You might want to read it.

Former CIA Boss, Task Force Member Says Even Though Metadata Collection Hasn't Been Useful, It Should Be Expanded