He's no Larry Flynt, but News Corp.'s Rupert Murdoch IS a hustler ... 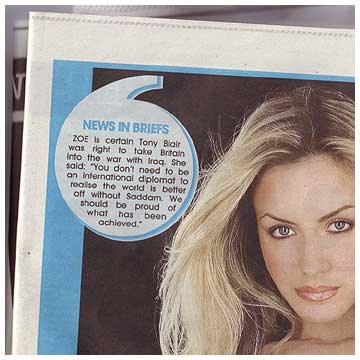 Model Propaganda: The Sun, The Girls, The Truth
© Tim Ireland 2004

The Sun and Rupert Murdoch

In the US, Rupert Murdoch's most effective propaganda tool is FOXNews. In the UK, it's a tabloid newspaper called The Sun with a daily circulation of about 3 million and change (more). Almost every day in The Sun, you can turn to Page 3 and see a picture of a topless woman. I know you're keen to hear more about that, but first, some background...

The Sun and Tony Blair

In 1997, Murdoch's two UK newspapers - The Sun and The Times - backed Tony Blair's "New Labour" and helped in no small part to bring them to power. Since then, with only a very occasional disagreement over immigration or Europe, The Sun has been helpfully feeding their readers the official government line on all manner of issues - up to and including the Iraq war. On 25 September 2002, they helped to sell the government's biggest lie, with a front-page headline declaring that Brits were "45 MINS FROM DOOM!" When Blair and his cabinet were finally questioned about misleading the public on the matter of WMDs, Defence Minister Geoff Hoon saved his arse by claiming that he had not seen this headline (prompted by information in the equally-dramatic dossier on Iraq's weapons of mass destruction).

The Sun and George W. Bush

The Sun has backed almost every Bush initiative and played down every embarrassment. For example, when the images of torture in Abu Ghraib were front page news, The Sun buried it on page 6, with less than a 1/4 page, 130 words and a teeny-tiny picture. The next day, leading with George W. Bush's version of events, they used 229 words. And that was about it. (A week or so later, a Labrador puppy was thrown off an overpass and The Sun was there with a massive 3/4 page and 270 words. The poster for the ensuing campaign to catch the evildoers is still online if you wish to see it.) When George W. Bush invited himself to the UK for an unprecedented and very unpopular state visit, he gave only one interview - to The Sun. Yes, this most conservative of presidents - keen to wage a war on porn granted the exclusive to his most effective mouthpiece, tits or no tits.

The Sun and Page Three

In Ye Olde Days, the topless models on Page 3 were accompanied by just enough insight and innuendo to allow the average reader to identify with the model and perhaps imagine they would be welcome to step into their lives and treat them to a 'playful' tweak of the nipples or a 'harmless' bongo session. Were the model training to be an accountant, the text would playfully refer to her "ample assets" and the "bottom line". Had she been a vet's assistant or even the owner of a small domestic animal, the caption would suggest that "She also brings the beast out in us, eh readers?"... and so on and so forth until you feared your sides would split.

The Sun and Rebekah Wade

Under the new editor, Rebekah Wade, this changed. Pictures of Page 3 models were soon accompanied by a caption entitled "News in Briefs". This is funny for two entirely different reasons; because (haha) she's wearing briefs and because Murdoch's news outlets are notorious for blurring the line between news and editorial content. And what editorial content, ladies and gentleman!

Those who have viewed FOXNews with a critical eye (and/or those who have watched the excellent documentary Outfoxed) will be aware of the important role graphics and supers play in selling core ideas. You also have to consider that The Sun once commissioned a reader survey that actually asked if the participant read the entire articles or just the headlines. Misleading headlines are often used in order to allow them to print the truth, while selling the lie. This is the way they operate. And with the new Page 3, they can deliver a highly focused and personalised editorial that sticks in the brain in a very personal and special way.

Rebekah Wade has said in the past that the act of getting your breasts out for a few hundred quid in order to help shift 3 million units is empowering and liberating - she even went so far as to assert that; "Page Three girls are intelligent, vibrant young women who appear in The Sun out of choice and because they enjoy the job. Unsurprisingly, millions of our readers - men and women - enjoy looking at them."

And who are we to argue with those figures, eh lads?

1. Empowerment - The following are all actual News in Briefs items that have appeared over the last 6 months or so. Throughout the page, we'll be charitably operating on the assumption that these are the actual opinions of the models, and not those of the government, the editorial team at The Sun and/or their master Rupert Murdoch. Only this assumption allows us to deny that these women are being exploited.

2. Harmless Fun - For a newspaper that would never shy away from referring to cannabis as a 'gateway' drug, it seems odd that they would deny the connection between soft pornography and some of the harder stuff. Particularly when most of their more popular lasses are constantly approached to pose fully nude for high-end publications, and a disturbing number of their less-successful ones fall into the trap of appearing for full gynaecological studies in the seedier ones. An interesting name to track here is Rebekah Parmar Teasdale, who was left out in the cold (only after doing so many full nude spreads with hot girl-on-girl action that the issue could no longer be ignored) but invited to return because it was Wade's first day and they needed a Page 3 girl by the name of Rebekah for this hilarious debut. Bless.

The central issue is the exploitation of these women - and The Sun's readership - in a way that not even Orwell could have imagined in his wettest dream.

Today's Page 3 girl is upset to hear that Col Tim Collins is leaving the Army. Says Zoe (22, from London, wearing underwear by Showgirls): "He is a born leader and I'm sure that whatever he does he will get the same well-deserved respect."

Katie (19, from Liverpool) thinks that: "Criminals are in prison to be punished. Warders must be able to show that they're in charge and not have to pussyfoot around inmates."

Today, Ruth (23, from London) comments on The Sun's campaign to throw Muslim cleric Abu Hamza out of the country. This is an especially useful campaign for the Blair government, who are at this stage running out of ways to deal with him. The Sun sets up a couple of hotlines, and for only 10p you can call to evict him Big-Brother style or leave him in the country to spend taxpayer's money on glass eyes and high-tech prosthetics (that no doubt shoot poison gas). Out of the 3 million people who read the Sun, only 35,935 rang the hotline. That's about 1% of the readership. But 98.4% of that 1% voted to evict Mr Shoutypants. So of course The Sun goes with a "98.4% Want Hook Out" headline. And that's where Ruth comes in. She says of Hamza: "He's a sponger and he has got to go. I'm not at all surprised that The Sun has been swamped with support for its campaign."

Swamped, do you hear me? Swamped!

Today, Zoe, 22, from London, uses her empowering platform to tell us that she is certain that Blair was right to take Britain into the war with Iraq. And good for her. She reassures readers who may be bothering their heads with small details following the publication of the Hutton Report and lays it on the line with the following statement (which closely echoes one of Tony Blair's only remaining defences at this stage): "You don't need to be an international diplomat to realise the world is better off without Saddam. We should be proud of what has been achieved."

Today, Krystle (21, from Manchester) gets her boobs out and expresses her disgust at John Lydon using a naughty word on television: "I couldn't believe my ears. There must have been loads of young children watching the eviction.... People should not be saying the C-word on telly at 10pm on a family show."

Today, Katie (19, from Liverpool) is 'horrified' at the thought if EU health tourists clogging our NHS and says: "The government should do something to protect the health service from these freeloaders."

Today Melanie (23, from Watford) has an ample chest that is 'full of pride' for the war heroes who received medals from the Queen. She goes on to say: "Their exploits were an inspiration. They deserve all the praise they get after going beyond the call of duty to topple Saddam."