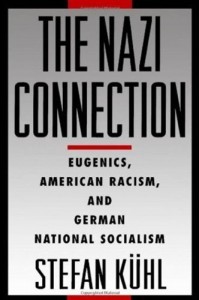 "... With European ties frayed post-WW I, America became the main scientific reference point for German theorists seeking international legitimacy: it unfortunately proved an influential model, not only intellectually but politically. ..."

Narrowly focused yet chillingly effective indictment of the American scientists and social theorists who inspired and applauded Nazi racist ideology. Eugenics--part science, part twisted Social Darwinism, according to German sociologist Kuhl--was first defined in 1883 by Francis Galton as the "science of improving the stock''--a science that went on to give academic respectability to the earliest expressions of Nazi racism. Insisting that many of the assumptions underlying Nazi thought were "by no means limited to German scientists,'' the author skillfully dismantles postwar attempts to marginalize the activities of the worldwide eugenics establishment, particularly in the US. With European ties frayed post-WW I, America became the main scientific reference point for German theorists seeking international legitimacy: it unfortunately proved an influential model, not only intellectually but politically. A 1907 Indiana law permitting the sterilization of the mentally handicapped long predated Germany's 1933 Law on Preventing Hereditarily Ill Progeny, and the 1924 American Immigration Restriction Act was later praised by the future Fuhrer in Mein Kampf.

Meanwhile, US sponsors--including the Rockefeller Foundation and Jewish philanthropist James Loeb--helped fund major eugenics institutes in Germany. In turn, many of these sought greater recognition by offering honorary degrees to leading US eugenicists- -two of whom, Leon Whitney and Madison Grant, are glimpsed here proudly comparing appreciative letters from Hitler. A brief reference to a resurgence of scientific racism in today's academia adds an especially pertinent cautionary note. More a monograph than a fully realized history but, still, a well-documented revisionist rebuke to those who would isolate Nazism as a unique phenomenon. -- Copyright ©1993, Kirkus Associates, LP. All rights reserved. --This text refers to an out of print or unavailable edition of this title.

When Hitler published Mein Kampf in 1924, he held up a foreign law as a model for his program of racial purification: The U.S. Immigration Restriction Act of 1924, which prohibited the immigration of those with hereditary illnesses and entire ethnic groups. When the Nazis took power in 1933, they installed a program of eugenics--the attempted "improvement" of the population through forced sterilization and marriage controls--that consciously drew on the U.S. example. By then, many American states had long had compulsory sterilization laws for "defectives," upheld by the Supreme Court in 1927. Small wonder that the Nazi laws led one eugenics activist in Virginia to complain, "The Germans are beating us at our own game."

In The Nazi Connection, Stefan Kühl uncovers the ties between the American eugenics movement and the Nazi program of racial hygiene, showing that many American scientists actively supported Hitler's policies. After introducing us to the recently resurgent problem of scientific racism, Kühl carefully recounts the history of the eugenics movement, both in the United States and internationally, demonstrating how widely the idea of sterilization as a genetic control had become accepted by the early twentieth century. From the first, the American eugenicists led the way with radical ideas. Their influence led to sterilization laws in dozens of states--laws which were studied, and praised, by the German racial hygienists. With the rise of Hitler, the Germans enacted compulsory sterilization laws partly based on the U.S. experience, and American eugenists took pride in their influence on Nazi policies. Kühl recreates astonishing scenes of American eugenicists travelling to Germany to study the new laws, publishing scholarly articles lionizing the Nazi eugenics program, and proudly comparing personal notes from Hitler thanking them for their books. Even after the outbreak of war, he writes, the American eugenicists frowned upon Hitler's totalitarian government, but not his sterilization laws. So deep was the failure to recognize the connection between eugenics and Hitler's genocidal policies, that a prominent liberal Jewish eugenicist who had been forced to flee Germany found it fit to grumble that the Nazis "took over our entire plan of eugenic measures."

By 1945, when the murderous nature of the Nazi government was made perfectly clear, the American eugenicists sought to downplay the close connections between themselves and the German program. Some of them, in fact, had sought to distance themselves from Hitler even before the war. But Stefan Kühl's deeply documented book provides a devastating indictment of the influence--and aid--provided by American scientists for the most comprehensive attempt to enforce racial purity in world history.

Stefan Kühl is a Professor of Sociology at the University of Bielefeld, Germany.

Went to a seminar on epigenetics at the University of Washington which supports the new eugenics via the human genome project and other ones too. Computers are essential tools in that search for modification and complete control of human genome. Asked if nutrition was important in supporting genetic expression since so many in US support the idea that only biology is destiny. He said of course malnutrition would negatively affect individual genetic expression intergenerationally, so the corporate budget cutters are the real problem regardless of party. Elizabeth Gold at Princeton has shown that feeding the brain right can help it to regrow itself, countering decades of pseudoscientific belief that it could not. Also it is a way of stabilizing and moderating serious PTSD whether from combat or inner city attempts to survive, a major causal factor in addiction and depression. Wow the poverty-violence-malnutrition-addiction connection is made.

Co-opting Intellectual Aggressors - The "Progressive" Face of the CIA