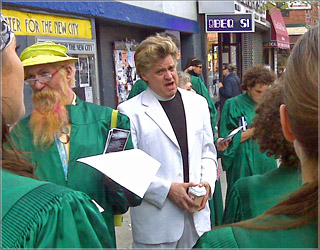 At the branch on St. Marks Place and 2nd Avenue, the choir performed a "mystery channeling of money" as bank customers withdrew money, and the reverend/performance artist preached to a crowd through a white megaphone.

"There's cancer in the mud in the promised land," the Rev. Billy intoned.

The journal Science has found mountaintop mining to be correlated with elevated rates of lung cancer.

Many in the crowd took pictures as the Life After Shopping Gospel Choir belted out, "Chase, Bring Us Back the Mountains" to the tune of "Go Tell It On the Mountain."

The police did not arrive until the choir reached a second branch, at Astor Place, where the choir left another "deposit" of West Virginia dirt.

Rev. Billy told the NYPD officers taping his speech that he was leaving a message for JP Morgan CEO Jamie Dimon in a plastic Easter egg on top of the mound of sacred dirt.

Talen said the message was that Dimon would be a "beloved banker" - "an oxymoron," he added - if he stopped putting money into mountaintop removal.

As Talen concluded his sermon, NYPD Officer William Svenstrup ordered him to withdraw his deposit of dirt from the bank floor.

"Then you are coming with me," Svenstrop said, while another officer took out the cuffs, and used them, and the choir chanted, "Free speech! Free press! Free people! Repressed!" Then the choir sang the text of the First Amendment.

Choir member Gaylen Hamilton said in an interview that Talen's wife was two weeks overdue on her pregnancy and had started experiencing contractions that morning. Several other choir members were worried that Talen would miss the birth of his child.

But at the 9th Precinct, an officer said that Talen had been released shortly after his arrest. Arresting Officer William Svenstrup, spotted at the precinct, would not reveal the charges, if any, against the Rev. Billy.

Talen and his choir began their Chase Bank "revivals" on March 21, and vowed to continue them until the bank stops financing mountaintop removal.

The Environmental Protection Agency in March asked a federal court to revoke the U.S. Army Corps of Engineers permits for the Spruce No. 1 coal mine in Logan County, W. Va., the largest mountaintop-removal surface mining project in the country.