" ... While The John Birch Society may have claimed not to be racist, their support for racist policies has led them to be a magnet for white supremacists. ... " 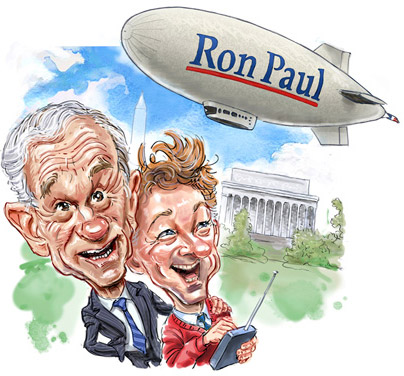 Rand Paul has never held political office and has no record to stand on, yet he is running for Senator of Kentucky. The main drawing point to Rand Paul is not himself, but his father’s name and the Tea Party movement. In an interview with Alan Colmes,Ron Paul admitted that there are no major differences in the political philosophies of  himself and his son..

Both Ron and his son opposed the Civil Rights Act of 1964, for forcing private businesses to integrate. They will claim that it is for “libertarian” reasons. But if you look deeper into the Ron Paul “Revolution,” you will see that it is just as connected to white supremacist movements as libertarian ones. Ron Paul is not your traditional ideological Libertarian. His brand of Libertarianism is rooted in the John Birch Society and the Ludwig Von Mises Institute. Both of these institutions try and hide their racism, while promoting racist policies.

You would think that Republican philosophies on race would have changed in 50 years. Still, Rand and Ron’s philosophy on Civil Rights is no different than Barry Goldwater’s, who ran for President in 1964 with the support of the John Birch Society and racist whites in the South who wanted to continue segregation. The website PublicEye.org, writes:

The JBS simultaneously discouraged overt displays of racism, while it promoted policies that had the effect of racist oppression by its opposition to the Civil Rights movement.

While The John Birch Society may have claimed not to be racist, their support for racist policies, has led them to be a magnet for white supremacists.

The Society’s anti-communism and states rights libertarianism was based on sincere principles, but it clearly served as a cover for organizing by segregationists and White supremacists. How much of this was conscious, and how much unconscious, is difficult to determine. That the Birch Society clearly attracted members with a more hate-filled (even fascistic) agenda is undeniable, and these more zealous elements used the JBS as a recruitment pool from which to draw persons toward a more neonazi stance on issues of race and culture.

Despite its nefarious history, Ron Paul has been a longtime supporter and friend of the John Birch Society, speaking as they keynote speaker at their 50th anniversary and holding rallies with them. Like The John Birch society, Paul has become a magnet for Neo-Nazis who support him online on sites like Stormfront. Paul even has a picture with the Internets most notorious Neo-Nazis, Don Black and his son Derrek, the founders of Stormfront. Paul also famously refused to give back a donation from Don Black.. ...

the depth of your insight is astounding larry.

when black americans began to vote and gain a little political power the southern democrats all fled over to the republican party of nixon and goldwater. they polished up their racism by using terms such as states rights-and state sovereignty. to the tea party-the govt. becomes the enemy-unless they get a right winger in there.