We can do the Innuendo, we can dance and sing, When it's said and done, we haven't told you a thing, We all know that crap is king -- give us dirty laundry. 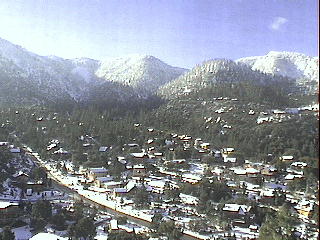 Steve Robertson is the general manager of the Filmmakers Sanctuary, 27567 Fantastic Lane in tiny Castaic (a derivation of “Kashtekm,” Chumash for "eyes."), California, a trucker’s junction nestled in the foothills of the Interstate-5 grapevine 30 miles north of Hollywood.

Filmmakers Sanctuary opened for business in March, billing itself as “the World’s First Studio Campus dedicated to the creation of transformational media that empowers the human spirit towards good and greater peace on earth.” The studio’s website boasts that it is “one of the few non-union lots in the Los Angeles area,” an appeal to frugal movie and television producers “who need a break away from the politics of Hollywood.”1 Past and current “human spirit-empowering” production projects at Filmmakers Sanctuary include HBO’s “Game of Thrones,” a Mercedes Benz commercial, IKEA’s current national ad campaign, National Lampoon’s “Going the Distance,” “Special OPS Delta Force,” a Rihanna music video, and “Sinbad: The Fifth Voyage.”2 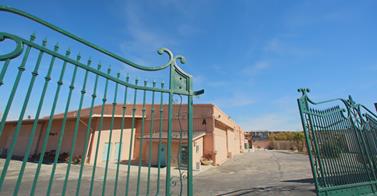 The Sanctuary may offer a break from the “politics” (organized labor) of Hollywood, but international politics are quite another matter. The studio is financed by Shahram (pronounced “Shaw-Rome”) “Shan” Hashemizadeh, an Iranian monarchist and proprietor of MelliTV  (also, like "Zeitgeist: The Movie" producer Peter Joseph, a steering board member of Robertson’s Project Peace on Earth).

MelliTV is a propaganda front based on the VOA model, covertly financed, in part, by the US government, per competing channels. In other words, the Comcast satellite station and lavish studio managed by Steve Robertson is subsidized by the American taxpayer. Exactly how much federal spending is poured into MelliTV -- one of about 20 propaganda channels in the States satbeamed to Iranians around the world  -- is classified. Sara Abutaleb Joula, a doctoral student at Loughborough University, notes that "none of these Iranian satellite channels clearly state their finances; even on their website there is no information about their sources of income, mission, philosophy, or affiliation. However, on the air, a few channels claim to be totally supported through private and public funds as donations or contributions. But the owners and operators of the channels sometimes accuse one another of having ties and/or being supported by the CIA, Reza Pahlavi, or even the Islamic Republic of Iran.”3

Hashemizadeh, founder and CEO of MelliTV, was born in Tehran, forced to flee to the US at the age of 20 after the 1979 Islamic revolution. He remains a fierce loyalist of Mohammed Reza “Light of the Aryans” Pahlavi, the Shah of Iran.

MelliTV goes so far as to play the original "theme song" of National Iranian TV under the Shah’s rule.5

In the '90s, the Free Republic website reports, Pahlavi’s apologists-in-exile “tried hard to make fear [of Iran] the outcome of a [G.W.] Bush win.” With President Bush behind them, funding to the satellite stations flowed from controversial corporatists, especially Akbar Ghahary, chairman of Safas Corporation (an equity partner of the General Electric Capital Corp.), and treasurer of IAPAC (Iranian American Political Action Committee), to “money-oriented TV and radio networks, such as, 670 AM, Tamasha TV, Melli TV and a specific program of Apadana TV hosted by an ideologist named Faramarz Foroozandeh.”6

Like their doppelgangers in the Cuban exile community, the Iranian diaspora is largely right-wing. Many of the exiles live in Los Angeles. IAPAC -- the Iran exile community’s answer to Israel’s AIPAC -- was the brainchild of Trita Parsi, an advisor to Ohio Congressman Bob Ney, currently serving a prison term for conspiracy and false testimony in the Jack Abramoff lobbying and bribery investigation.

Ney banked on payoffs from Abramoff, lobbyists and a pair of foreign businessmen, a felon and an arms dealer, in exchange for promoting their interests in the District of Columbia. The soon-to-be convicted felon mustered the lobbying committee of Iranian theocrats known as the National Iranian-American Council (NIAC). IAPAC, a NAIC spin-off, was cobbled together by Parsi and Siamak Namazi, an Iranian-American in the US who, according the "News About Iran" website, returned to Iran and “became a partner and the managing director of Atieh Bahar Company in Tehran,” then drafted a seminal paper on the creation of an Iranian American lobby:

“Siamak Namazi has been Parsi’s friend and partner for over a decade. Namazi’s family, together with Bijan Khajehpour and Albrecht Frischenschlager, control the Atieh Bahar firm in Tehran. This web of companies is in direct partnership with the Iranian regime. Khajehpour‘s Qheshm Energy is a joint venture with the Qheshm authorities (Government). Frischenschlager is in partnership with three free zone authorities. He is also partner with Hatami Yazdi, a famous figure in the Iranian oil Mafia and the former head of three important Iranian banks, all under US sanctions. Atieh and Iranian oil ministry co-organize oil related events. For example, two of Atieh’s prominent clients, French Total Oil Company and the Norwegian Statoil, had to pay tens of millions of dollars in bribes to penetrate the Iranian market. To materialize the ‘Iranian American Lobby,’ a series of conferences were held to attract young Iranians. One of the conferences was held on Jan. 26, 2006 in Tehran and Namazi’s father, Bagher was the host.”7

The IAPAC Board of Directors for the 2014 election cycle:

Unofficial estimates place some 500,000 Iranian immigrants in the US, most of them in Los Angeles. The LA Times reports that “a CIA station here” … in Los Angeles … “has spent a decade recruiting informants among Iranian expatriates and businessmen who travel to Iran. The local FBI field office is wooing Iranians as sources — and investigating others as potential terrorists or spies.”

The Persian expats jockey for official recognition, “touting contacts with the White House, the Pentagon, the State Department, the CIA.”

The opposition cadre boasting the most support from Congress, the People's Mujahedin of Iran, or MEK, is a State Department-designated terrorist group.

“Though its leaders deny it, it has been accused of involvement in the murders of Americans in Iran. The group became an opponent of the Iranian government, forged an alliance with Hussein and took refuge in Iraq, where it surrendered voluntarily to U.S. forces in 2003.  In Los Angeles, it has a shadowy presence, with some sympathizers but a low public profile.”8

From this Persian cell of fifth-column iniquity was born MelliTV.

“Due to a relatively high illiteracy rate, print media, online publications, and weblogs do not play an important role in opinion shaping among the Iranian population,” notes Aspen Institute Berlin in a report on the satbeamed stations. “Much higher significance can be attributed to television and radio. This is supported by the result of a nationwide survey conducted by the Ministry for Culture and Islamic Leadership in the summer of 2002, according to which 96.2% of all families own a television set and 80.9% a radio. The daily use of television is, on average, 211 minutes, while the radio is listened to for 85 minutes.”9 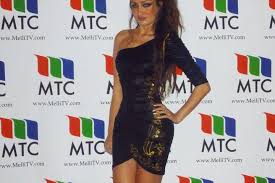 By American standards, MelliTV’s programming is low-end. A reviewer inside Iran opines: “If you were to rate the overwhelming majority of the content on the broadcast outlets such as Iran TV, NITV, Pars TV or Melli TV, based on the accepted programming and entertainment standards in all major television markets in the world, they would be classified as ‘dead air’ at worst and third rate amateur programming at best.”

The political programming is “void of a constructive message or solution to any problems,” and is laced with “profanity and accusations against the Tehran regime, opposition leaders abroad or the owners and hosts of the other satellite networks or all of the above. Other shows are often completely out of touch with the majority of their viewers who are Iranians living in Islamic Iran.”

Low-budget production values hobble the programming: “The editing and special effects so easily done on a home PC are either completely absent or horribly misused. In some cases, the talk show host is also the camera operator who gets up from the chair from time to time and adjusts the camera angle.

“The limited and shallow discussions presented on most of these TV channels lead the people inside of Iran to perceive the Iranian expatriate communities as a corrupt, drunk and party-hardy bunch of lost souls. These same channels offer very little insight into the real life of people in their host countries. This is not only bad television … it's a cultural crime.”10 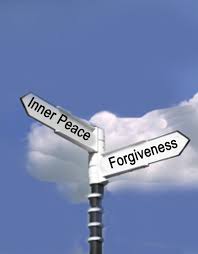 The Project Peace on Earth concert was produced by Mike Mitchell, executive producer of the 1984 Los Angeles Olympics and Live Aid a year later, also Hal Uplinger, producer of that benefit mega-concert, featuring Tina Turner, Mick Jagger, Paul McCartney, David Bowie, the Cars, the Who, Tom Petty and Bob Dylan, globally televised in 1985 to relieve the human toll of famine in Ethiopia.

Uplinger, the sports producer at the CBS, died in 2011 and can rest in peace. He was the American producer of Live Aid and has committed no offense. Michael C. Mitchell, however, mishandled tens of millions of dollars in donations in an Iran Contra-style diversion of charitable funds to the Ethiopian rebels, and for that deserves much of the scorn that has since been directed at Boomtown Rat Bob Geldof. Live Aid was the launch of an immensely corrupt enterprise that used celebrity Supersuckers to enrich ultra-conservative corporatists, and left hordes of economically-drained South Africans to suffer intense political repression -- recalling the most appalling conditions of life under the Nazi regime – slavery and death.

4. For more information, see: Elana Klotsikas, “Promoting Civil Liberties and Democracy in Iran through Media,” conference paper, Aspen Institute Berlin, July 22, 2005: “Satellite television programs run by Iranians in exile, based primarily in Los Angeles, undermine the ideological indoctrination accomplished by state-run television. … These programs are especially popular among the younger population, as they offer entertainment – especially in the form of music videos [MelliTV is an example], which are not permitted on state television.” #: http://www.worldsecuritynetwork.com/Iran/Klotsikas-Eleni/Promoting-Civil-Liberties-and-Democracy-in-Iran-through-Media

10. Farhad Radmehrian, “Bad TV -- Even the shows with political themes are mostly filled with profanity and accusations,” The Iranian, June 12, 2002.

Related: Blood and Oil: Inside the Shah's Iran, by Manucher Farmanfarmaian All the Shah's Men: An American Coup and the Roots of Middle East Terror, by Stephen Kinzer