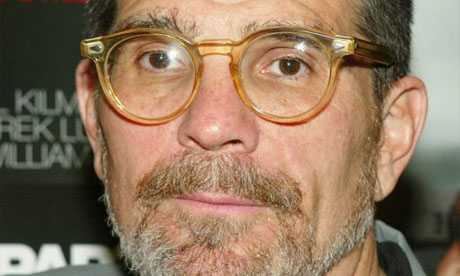 Playwright David Mamet had a lot to say at the Manhattan Institute's annual Wriston Lecture on Monday night. Getty Images
.
In an election-eve mix of theater and politics in the Plaza Hotel ballroom, Mr. Mamet unleashed a 30-minute torrent of ideas as dense and sharp as anything that comes out of his characters' mouths. But the author of "Glengarry Glen Ross" (a revival of which is set to open Dec. 8 on Broadway) didn't spend much time chronicling his departure from the left, which was the subject of his 2008 Village Voice essay, "Why I Am No Longer a 'BrainDead Liberal.'"

Mr. Mamet's recent conversion to conservatism earned him a speaking slot that has been occupied in previous years by George F. Will, Condoleezza Rice and Supreme Court Justices Samuel A. Alito, Jr. and Clarence Thomas.

Tough acts to follow, but the institute's lectures are rarely delivered by those with careers on Broadway and in Hollywood. Mr. Mamet explained only that he, like the late Harold Pinter (a fellow playwright and friend), had decided to "go from thinking about the most minute of human interaction—two lines of dialogue—to thinking about what the hell is going on here."

From there, the ideas whizzed by at such a pace that losing concentration for a moment meant losing whole strands of thought. Ultimately, Mr. Mamet took a broad look at what makes our culture and its conventions. It ranged from mocking precious consumerism—such as a catalog description of a barn owl with reclaimed glass eyes—to objecting to jokes about Republicans during the 2012 Emmy Awards ceremony.

Also in the mix: Oliver Wendell Holmes's poem "The Deacon's Masterpiece or The Wonderful One-Hoss Shay"; the left's "discovery" of global warming; and irritating American habits like as saying "1, 2, 3" before snapping a photo.

One had to wonder about the playwright's relationship with punctuation. What his lecture needed, someone said afterward, was a second character. Indeed, once the questions from the audience began, the dialog turned to zippy one-liners. New York Post theater columnist Michael Riedel asked Mr. Mamet's opinion of fellow playwright Tony Kushner. "I'll let Tony Kushner work his side of the street and I'll work mine," Mr. Mamet said.

The Manhattan Institute, a policy-minded think tank, draws a crowd that spontaneously applauds when it hears the words "Milton Friedman." But there were theater and film connections in the audience as well. Mr. Mamet thanked some of his producers in the crowd; he also came over to greet Barbara Tulliver, who has edited eight of his films, including "Homicide" and "State and Main."

Ms. Tulliver said that on film sets Mr. Mamet is known to learn all the names of his crew members. And though she might not agree with all his political views, she praised his ability to create a culture of listening, even when there's a political disagreement brewing: "People," she said, "don't get a chance to listen to each other."

Write to Pia Catton at pia.catton@wsj.com